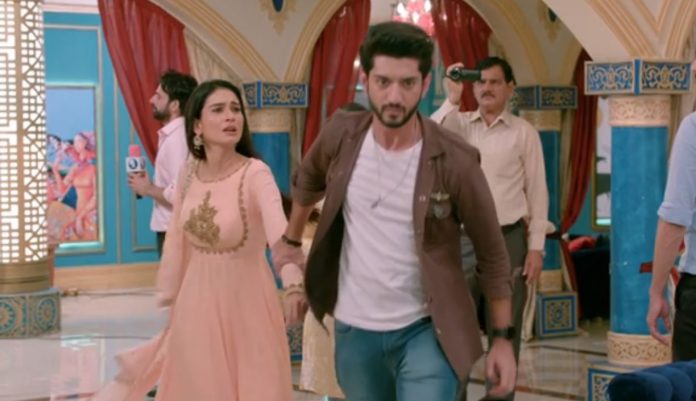 Pavitra Bhagya 22nd September Written Update Review Read Episode Full Written Updates: Pavitra Bhagya 22nd September 2020 Written Update Reyansh punches Vardhan’s face when he speaks ill about Praniti. Vardhan questions Reyansh’s feelings for Praniti and also his relation. He asks Reyansh to punch him further, but answer his elder brother first. He scolds Reyansh, who gets speechless about his relation with Praniti. Reyansh feels he is much wrong to not value her before.

He is responsible for ruining her life. He feels guilty that Praniti has tolerated everything because of his one mistake to run away from a father’s duty towards Jugnu. He accepts his mistakes. He tells that he never imagined that Praniti will suffer all her life. He apologizes to Praniti. Vardhan asks him to stop his filmi drama. He tells that there is no Khurana woman in the house. He doesn’t want Praniti to stay in their house.

He asks Reyansh how could he claim his rights on Praniti. He tells that he can’t ignore Praniti on seeing her in the house, since she is pretty, she can’t be of Reyansh alone. Reyansh takes a stand for Praniti. He gets into an ugly fight with Vardhan. He loses his temper. The brothers fight. Praniti just sees Reyansh’s love. Dadi and others come ahead to stop the fight. Reyansh tells Baljeet that Vardhan tried to molest Praniti.

He doesn’t want Praniti to tolerate the wrong. Baljeet stops Reyansh from accusing Vardhan. She questions Vardhan is Reyansh is saying the truth. Vardhan doesn’t lie. Baljeet slaps Vardhan. She doesn’t want any of her grandsons to do a crime. She scolds Praniti for wandering in the house and attracting men. She tells that she should stay in her limits. She taunts Praniti for being an unwed other. She accuses Praniti for attracting Vardhan and being at equal fault. Praniti stops Baljeet for always favoring the man’s world.

She doesn’t want men to dominate them. She asks Baljeet how does a woman get at fault when a man badly eyes her. She feels Baljeet will never bring a change, even if she is a strong woman. She reminds Dadi that she has conquered everything to support her family. She insults Dadi to answer her and show her real place. Baljeet angrily raises hand on her and gets hindered by Reyansh. Praniti asks Baljeet if she is feeling bad, its all a result of her bad perception. Praniti calls the police to get Vardhan arrested.

Baljeet tells that its a family matter, they will sort it out. Praniti tells the inspector that she has Vardhan’s statement recorded on the phone. She plays the statement when Vardhan threatened her. Reyansh is shocked to hear his brother’s disgusting statement. Vardhan gets worried on being caught. Reyansh asks the inspector to arrest Vardhan for the molestation crime.

The reporters reach there to question Baljeet and Vardhan. The reporters support Praniti. Vardhan gets arrested. The reporters trouble Baljeet with the questions. Praniti wants Vardhan to land behind bars and suffer. She finally gets justice for herself. Baljeet gets speechless when she is asked if women aren’t safe in her house, if just criminals are born in her house. He stops Archit from making personal attacks on his family. Praniti is thankful to Reyansh and Archit as well for the help. Reyansh takes her away from the reporters.

Praniti gets hurt. He gets angry seeing her with Archit. He didn’t expect her to send Vardhan to jail and calling the media home. She tells him that she didn’t invite the media for the case. She clears out that she didn’t inform Archit, maybe Jugnu has informed him. Reyansh tells her that he was handling the matter, everyone will come on the news channel because of her. She doesn’t care for his family. She tells that everyone will know Vardhan’s truth. She asks Reyansh to face the truth and support completely for once and all. She asks him to choose his side.

Reyansh recalls his past with Praniti. He had been mean, cruel and evil before, but didn’t want to break her heart. He realizes his evil deeds and feels ashamed of himself, recalling the way Vardhan has shown him the mirror. He feels Baljeet never showed him the real path, so he had been wrong always. He chooses the right path to support Praniti’s truth completely.

Reviewed Rating for this particular episode Pavitra Bhagya 22nd September Written Update Review: 5/5
This rating is solely based on the opinion of the writer. You may post your take on the show in the comment section below.