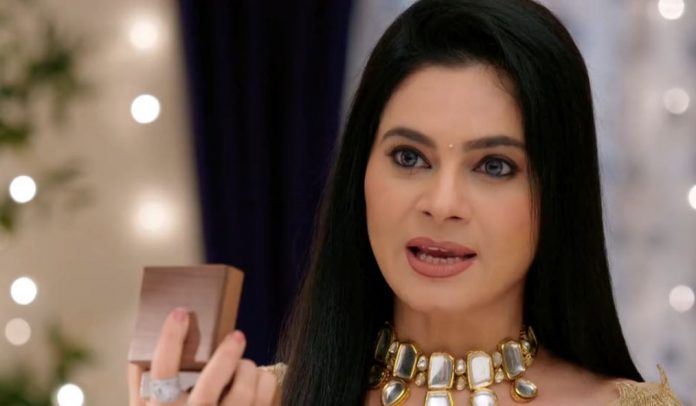 Anupama 24th September 2020 Written Update High drama Anupama and Kavya have a conversation about Anirudh. Kavya tells her that she doesn’t want any more troubles for her, since her legal complaint will make things worse for her. Anupama asks her why is she afraid when she isn’t at any fault. She wants Kavya to take a step against Anirudh, who is totally wrong at this time. She wants Kavya to teach him a lesson so that he doesn’t abuse her next time.

Kavya tells her that she still doesn’t want any drama, she is happy in Vanraj’s house now. Anupama tells that none should break limits. She tells that women should teach the limits to men. She tells that a woman’s world is limited to her family. She wants Kavya to secure her family. She knows Kavya would like to settle down. She promises to support Kavya in her decision. Kavya is eyeing Anupama’s family.

She wants to take Anupama’s place in the family. She doesn’t answer Anupama. Meanwhile, the family prepares to welcome Kinjal and her family. Kinjal arrives there and finds it odd that no one is present to welcome her. Rakhi tells that they should expect least from Shah family, who have booked a small community hall for the functions. Rakhi herself gets hugely surprised when she sees Anupama’s efforts. Anupama beautifully decorates the house and gives a grand welcome to Kinjal. Kinjal gets much happy to see the family happily singing and dancing for her welcome. Anupama pays much respect to Kinjal’s family. She leaves them impressed. Paritosh surprises Kinjal. Rakhi doesn’t like anything, but holds a fake smile. Kavya gets dressed in Anupama’s saree and wants Vanraj to compliment her.

She doesn’t want Vanraj to ignore her. He is upset to see her in Anupama’s saree. She tells him that she has taken it from Anupama since she liked it. Vanraj asks her to stay away from his family. He tells that he can’t make her part of family. He is stressed that Anirudh and Sanjay are already troubling him. He tells that they need to be careful since Rakhi is also taunting him all the time. Rakhi finds Vanraj busy with Kavya.

She asks him to come for Ashirwaad ritual. Anupama and Vanraj perform the rituals. They gift Kinjal. Rakhi brings costly things to gift Paritosh. She surprises Paritosh. She shows off her richness. She asks Anupama to bring the ring to show to Kinjal before the engagement. Anupama brings the diamond ring to show to Kinjal. Kinjal gets eager to see it. She finds the ring missing. The ring gets stolen. Rakhi creates a big issue.

She calls Anupama careless and tries to provoke Vanraj. She wants Vanraj to fight with her so that she gets a chance to call off the alliance. She tells that just Kavya is the outsider. Kavya feels bad that Rakhi is signing towards her as a thief. Rakhi reminds everyone that Anupama got the ring by going against everyone. She taunts Vanraj and angers him further. He controls his rage. Anupama feels guilty that she couldn’t save her son’s happiness.

Vanraj defends Anupama to keep his love drama. Anupama is relieved that at least he isn’t anger on her. Anupama wants to find the ring. The entire family searches for the ring. She wants to find out who is behind the theft. She will soon find the ring and also the thief. Will Anupama catch the thief Kamini and teach her a lesson? Keep reading.

Reviewed Rating for this particular episode Anupama 24th September 2020 Written Update High drama: 4/5
This rating is solely based on the opinion of the writer. You may post your take on the show in the comment section below.