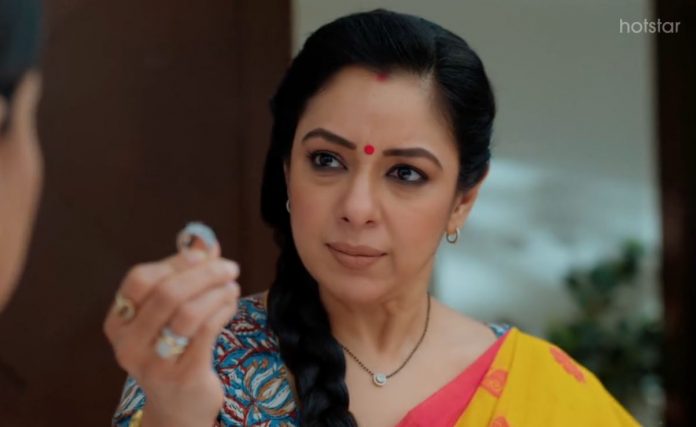 Anupama 25th September Written Update Kamini caught Kinjal is stressed as the ring got lost. Rakhi doesn’t leave a chance to taunt Vanraj and Anupama. She asks Vanraj not to worry if they fail to find the ring. She tells that she is ready to sponsor the engagement ring from their side as well. She tries to hurt his esteem.

Vanraj keeps his cool. Kinjal makes a leave with her parents. Paritosh creates a scene. He feels Anupama is really careless that she has lost the diamond ring. He feels Anupama has lost his happiness along with the ring. He cries that Kinjal’s family will not accept any other ring. He wants Anupama to find the same ring. Anupama is trying hard to get the ring.

Baa tells them that it was Anupama’s duty to keep the ring safe. She also fuels the fire. Vanraj is speechless. He can’t comment anything, since Anupama had sold her jewellery to get the ring. Paritosh tells that Anupama lost the ring as if it doesn’t matter to her. Sanjay suggests them to file a police complaint to find the ring. Kamini asks them if the ring is stolen by someone.

Baa tells them that none in the family can steal it. Kamini signs about the outsiders in the family. Nandini thinks she is telling about Kavya and her. She scolds Kamini. She tells that they aren’t thieves, anyone can search her house. Kamini tells them that she didn’t mean to taunt Kavya, but was telling about Jhilmil, the house maid. She asks them to check the maid’s stuff. Jhilmil and her daughter Gudiya get terrified with the accusation. Anupama gets to hear Kamini’s taunts. She takes a stand for Jhilmil and Gudiya. She tells them that she trusts Jhilmil and is sure that the latter will never break her trust.

Kavya gets upset that Anupama compared her to a maid. She fights with Vanraj. He tells that Anupama didn’t mean to hurt her. He doesn’t want to clarify further. He tells that he can’t handle more stress. She thinks Anirudh was right about him. She is glad to know Vanraj and his family well. Later, Kavya tries to take Anupama’s place in the family. Pakhi tells that Anupama lives in Vanraj’s heart. Kavya gets angry and tries to dominate. She takes over Anupama’s duties. She tries to serve food to Vanraj.

Furthermore, Anupama tells Kavya about Vanraj’s choices. Baa asks Kavya not to interfere in their family and go back to Anirudh. Anupama asks Baa to let Kavya stay with them, when Kavya is happy and safe. She tells that they shouldn’t send Kavya so soon, since Anirudh is unpredictable. Samar and Anupama make a plan. They play a drama and tell the family that they got the ring. Anupama tells Baa that she has got her son’s happiness back. Kamini had stolen the ring.

She wonders how did Anupama get the ring when she had hidden it. Kamini goes to check the ring. She finds the ring in her bag. Anupama catches her red-handed. She confronts Kamini for the theft. Kamini apologizes to her and accepts her mistake. She wants Anupama to not reveal the mistake to anyone. Anupama doesn’t forgive her since she has broken her trust.

She reprimands Kamini for hurting her family’s sentiments and ruining Paritosh’s important day. There will be a new track coming. Kavya tries to show her rights on Vanraj. She interferes in Vanraj and Samar’s matter. Anupama shows Kavya her real place and shows her strong stand. She doesn’t give her rights and place to Kavya.

Reviewed Rating for this particular episode Anupama 25th September Written Update Kamini caught: 4/5
This rating is solely based on the opinion of the writer. You may post your take on the show in the comment section below.