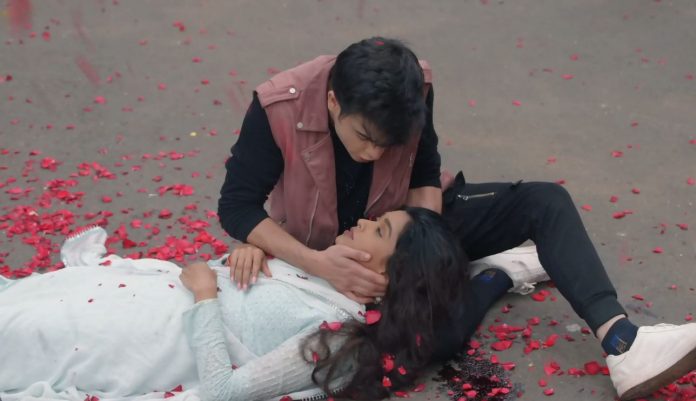 Kumkum Bhagya Prachi’s accident to unite Abhi Pragya Abhi gets glad to meet Mehra family. There is a big family union. He is glad to meet all his Dadis. He tells that Pallavi had called him and scared him a lot. He likes the surprise. Aaliya and Rhea also get delighted to see them. Pallavi surprises everyone. They have a laugh. Vikram and Pallavi introduce their son Ranbir to Mehras. Ranbir wants to rush to his college. Rhea is sure that Ranbir is going to propose Prachi.

She also follows him to stop him from meeting Prachi. Aaliya wishes the truck driver reaches there on time and knocks down Prachi. Rhea awaits Prachi outside the college. She plans to kill Prachi so that she doesn’t snatch Ranbir from her. She meets the truck driver. Ranbir reaches the college with Aryan. He tells Aryan that he will buy some flowers to propose Prachi. Shahana and Prachi reach the college.

Prachi tells that she has nothing to tell her. Shahana wants to know what did Ranbir tell her. She tells that Ranbir will propose her. She asks Prachi to bet on it. Prachi doesn’t think so. Rhea asks the truck driver to knock down Prachi and get the money once he is done with the task. She confirms Prachi’s picture. Ranbir awaits Prachi. He is sure that Prachi will not refuse to him. Rhea asks the driver to be ready, Prachi is coming.

She tells him that he should flee from the accident spot. Ranbir and Prachi get into a moment. He thinks to propose her. Prachi goes to Ranbir with a smiling face. The truck comes in between them. Prachi gets knocked down in front of Ranbir’s eyes. The truck driver flees. Ranbir fails to save Prachi’s life. He witnesses the accident and gets terrified. He runs to help Prachi. Prachi faints down. Ranbir takes her in his lap and sheds tears. He wishes her to stay fine. He cries out his pain. He asks Aryan and Shahana to help him.

He sees Rhea’s car and takes lift from her. He asks her to just drive to the hospital. Rhea gets helpless to take them to the hospital, against her will. Ranbir worries for Prachi. He panics and asks her to open eyes once. Rhea gets jealous and wishes that Prachi dies. Shahana informs Pragya about the accident. Pragya is super shocked to know her daughter’s accident news. Pragya shares the shocking news with Sarita. She rushes to the hospital.

Sarita thinks to inform Abhi. Ranbir doesn’t leave Prachi’s hand. Rhea thinks it will be end of Prachi. She hugs Ranbir and tells him that Prachi will be fine. She feels sorry to hurt him. Shahana and Aryan also console him. Rhea asks Ranbir not to call Abhi, who will be disturbed with this news. Ranbir doesn’t listen to her. He calls Abhi and seeks her help. He informs about Prachi’s accident. Abhi gets too worried. Ranbir tells that he has seen the truck driver and also know the truck number. He asks Abhi to nab the truck driver.

Abhi assures that he will get all the possible help. He tells that he will cancel his meeting and come to the hospital. Ranbir tells Rhea that Abhi is coming back from the airport just for Prachi. Rhea gets worried that Abhi will be involved. The truck driver is worried that Ranbir has seen his face, and Rhea didn’t pay them money till now. He thinks why did Rhea take Prachi to the hospital, as if she wants to frame them. Ranbir consoles Shahana. Pragya reaches the hospital and breaks down in front of Rhea. Rhea feels sorry and apologizes to Pragya. Abhi and Pragya will come face to face. Will Rhea admit her crime? Keep reading.

Reviewed Rating for this particular episode Kumkum Bhagya Prachi’s accident to unite Abhi Pragya: 3/5
This rating is solely based on the opinion of the writer. You may post your take on the show in the comment section below.