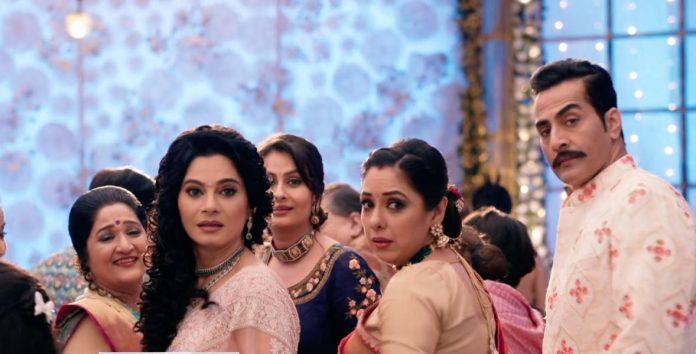 Anupama 28th September Kinjal elopes shocking all Kavya tries hard to take Anupama’s place, but Vanraj doesn’t support Kavya. He finally asks Kavya to leave his house. This upsets Kavya. She takes Anupama’s nuptial chain from the cupboard. She tries to wear it and smiles thinking she will get Vanraj. Vanraj stops her and reprimands her for her madness.

He tells her that she can’t do such things, she has to control her emotions, else everyone will know about them. He asks her to go away and stay in Nandini’s house. He explains that she is making many mistakes, which he can’t tolerate. She feels terrible that he chose Anupama and asked her to leave. Vanraj takes Anupama’s nuptial chain and makes a leave in rage. She thinks she has really acting silly and upsetting him.

Kavya insists that she will make the special pasta for Vanraj. Anupama thinks to let her make it. She asks Kavya to do what she wants. Pakhi wishes to have something different. Kavya serves the pasta to Pakhi and surprises her. Vanraj doesn’t want to have the pasta when Kavya serves. He sees Anupama, who signs him to have it. Vanraj unwilling eats some to keep Kavya’s heart. He tells that its really tasty. Kavya gets pleased.

Later, Anupama sees Vanraj having dinner at night. She gets glad. He tells her that he ate the pasta on her saying, else he doesn’t like it. He adds that homemade food is the best, pasta is just a time being choice. He tells that he can never leave the homemade food for any other cuisine. He is habitual to have the food prepared by Anupama. Kavya sees them and overhears the conversation.

She thinks if Anupama is his habit, if he will never leave Anupama for her sake. She gets upset that he was cheating her. She confronts him for having dinner twice. She tells that he should have not eaten the pasta against his wish. He tells her that he will not clarify her for little issues. He warns her to stay away from him until Paritosh’s engagement. He tells that he doesn’t want any problem to occur.

He is upset with her. She can’t let him go away from her. She loves him a lot. Rakhi calls up Vanraj and wants him to welcome her VIP guests well. Vanraj agrees to her. He asks Anupama to deal with Rakhi, who always finds chances to insult them. Anupama sees Paritosh overhearing them and feeling bad. She doesn’t want Vanraj to say anything further.

Anupama asks her to live well and not have fear in heart. She is also worried thinking of Paritosh’s engagement. Someone reaches the house and spies on them. Anupama sees Paritosh’s childhood pictures and cries. She tells Vanraj that she regrets that the children have grown up so soon. Vanraj and Anupama share their memories. Kavya wants to break their union.

Vanraj wants Paritosh’s engagement to go on well. He tells Anupama that its a special day for Paritosh, he doesn’t want anything to go wrong. This puts her in tension. Anupama rushes to the engagement venue. She forgets Paritosh’s sherwani at home. She doesn’t realize it and reaches the venue. They receive a huge shock when Pramod reveals that Kinjal has left a letter and ran away to avoid the marriage. Rakhi didn’t know it either. Anupama, Vanraj and Paritosh are left in shock. Who is behind Kinjal’s unexpected disappearance? Keep reading.

Reviewed Rating for this particular episode Anupama 28th September Kinjal runaway shocking all: 3/5
This rating is solely based on the opinion of the writer. You may post your take on the show in the comment section below.