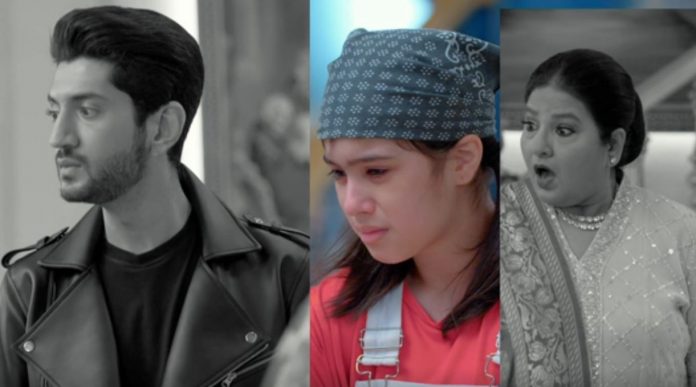 Pavitra Bhagya 29th September Jugnu’s shocking rage Reyansh and Jugnu plan a surprise for Praniti. Baljeet plots against them. She makes sure that the surprise plan fails and Jugnu gets upset with Praniti. Reyansh and Jugnu make laddoos for Praniti by following the recipe. They have a fun time. Baljeet wants their terms to get bad. She thinks if Jugnu gets against her mother, then Praniti will be out of Reyansh’s life as well. She wants Jugnu to hate Praniti. She goes and deletes Jugnu’s audio message from Praniti’s phone.

Archit informs Navya about the surprise for Praniti. He wants to get a deal for her so that she can do well in her work. He thinks the meeting will be the important one, if successful, then it will be the birthday gift for Praniti. He aims to spend time with her. Jugnu fools Reyansh that she got electrocuted. Reyansh gets too worried. She asks her how could she scare him like this. They decorate Praniti’s room. Reyansh plans everything well.

He thinks Praniti will be happy. Praniti meets Archit. He informs her that the investor isn’t coming, the meeting got cancelled. He stops her at home to celebrate her birthday. Archit and Navya surprise Praniti. Praniti tells them that nobody remembered her birthday in Reyansh’s family. Archit presents the numerous cakes for her as per her choices. She likes his gesture. Reyansh gets angry that Praniti didn’t come home.

Jugnu asks him to keep cool, Praniti will soon come. Baljeet tries to instigate Reyansh against Praniti. She asks him to make a video call and check on Praniti. Praniti tells Archit that she will cut the cake, but wants Jugnu will feed her first. Archit and Navya support her. Reyansh calls Praniti and finds her with Archit. Baljeet tells Reyansh that Praniti is celebrating her birthday with Archit, she doesn’t value Reyansh or her daughter Jugnu. She tells that Praniti loves Archit. Reyansh feels bad.

Meanwhile, Praniti misses Reyansh and Jugnu. She makes a wish to unite with them. She cuts the birthday cakes. She tries to call back Reyansh. She thanks Navya for making her birthday special. Navya feels lonely. Praniti asks Navya to stay strong when she is going to bring her child into the world. Navya tells that Maan always comes to help her, while Armaan broke her trust. She feels Khurana family has some good people as well. She praises Reyansh.

She tells that Reyansh was too selfish before, but now he has changed, he has handled everything. She tells that Reyansh has taken care of her always. Jugnu gets angry and leaves the food. She doesn’t want to have anything. She asks Reyansh if he isn’t upset. Reyansh asks her to not vent her anger. Baljeet acts supportive towards her. Reyansh asks Baljeet not to spoil Praniti and Jugnu’s relationship.

He explains that Jugnu’s upbringing shouldn’t get spoiled. Baljeet tells Reyansh that she has raised all her grandsons. Reyansh tells that she didn’t teach good values and manners to anyone. He wants to give good values to his daughter. Jugnu doesn’t understand why they are arguing. She awaits Praniti. Praniti wants to rush home. Archit asks her to wait for some time, nobody is waiting for her at home with a birthday surprise. He asks Praniti to make a call to Reyansh by his phone. She knows Reyansh will be angry. She thinks Jugnu would be waiting for her. Jugnu burns the card which she made for Praniti. This shocks Reyansh, while Baljeet rejoices.

Reviewed Rating for this particular episode Pavitra Bhagya 29th September Jugnu’s shocking rage: 5/5
This rating is solely based on the opinion of the writer. You may post your take on the show in the comment section below.

Catch the latest episode in pictures: