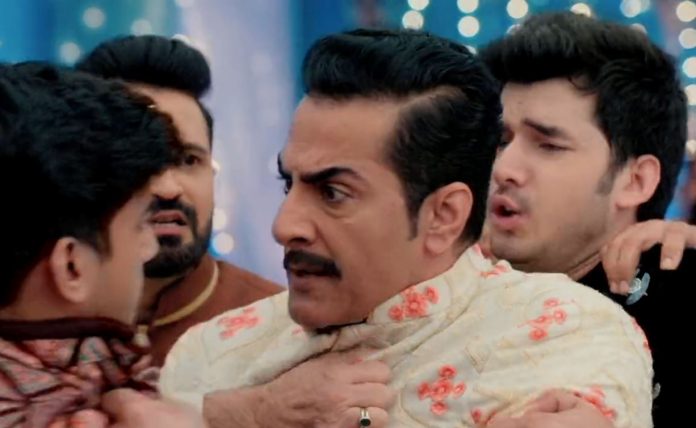 Anupama 1st October Written Update Vanraj unbridled rage Rakhi follows Vanraj and Kavya to overhear their conversation. She makes an excuse when they spot her. She asks them if they have come out to discuss any work. Kavya panics and lies to her about the work call. Rakhi finds something suspicious. She thinks Vanraj and Kavya’s affair can help her end Paritosh and Kinjal’s alliance. She needs proof against them. She realizes Vanraj is being extra cautious when she is around.

Anupama asks Jhilmil to be with Pakhi until she comes back. Pakhi is shell shocked to see Siddharth, who blackmails her for revenge. He scolds her for getting him rusticated by complaining to the principal. He tells Pakhi that she should ask Jhilmil to leave else he will leak her pictures. He forces Pakhi. She unwilling asks Jhilmil to go and get her make up kit. She promises to take care of her.

Jhilmil tells that Anupama wants her to guard at the door. Pakhi insists and sends her away. Anupama sees Jhilmil alone. She enquires about Pakhi. She learns that Pakhi had forced Jhilmil to leave. Anupama thinks what’s wrong. She feels Pakhi is in trouble. Samar and Nandini present a cool performance, while Siddharth tries to molest Pakhi. Pakhi pleads him to spare her, since she didn’t complain to the principal about him.

He hurts her until Anupama reaches. Anupama angrily slaps him with a terrific warning. She tells him that he can’t dare to hurt Pakhi. Siddharth tries to threaten Anupama by showing his rich influence. Anupama pities his parents who have such a bad son. She slaps him twice. Siddharth loses his cool. Vanraj awaits Anupama in the party. Paritosh and Kinjal get on the stage for the romantic performance.

Anupama wants to expose Siddharth’s misdeed. She drags him to the party and shocks everyone. Rakhi tells Anupama that Siddharth is Desai’s son. She mentions that she already asked Vanraj to take care of her special guests. She expresses her disappointment. She gets a chance to break the alliance. She announces that she is breaking the relation since Anupama had insulted her guest. The family gets worried.

Mr. Desai asks Anupama about her actions. Anupama pushes Siddharth down on the floor. Rakhi tells Kinjal that Anupama is crossing limits, they will better walk out by breaking the newly formed relation. Kinjal is worried. She wants to hear Anupama once. Anupama stops Rakhi to reveal the truth. She tells them that Siddharth also studies in Pakhi’s school, he had morphed Pakhi’s pictures to blackmail her, he was trying to molest Pakhi.

She tells that she is Pakhi’s mother, she isn’t wrong to take a step to protect her daughter. The truth shocks Vanraj, Baa and family. Vanraj can’t tolerate this. Anupama requests Siddharth’s parents to forgive her if she is wrong. She tells that she will always fight for her children. She has taught Pakhi to fight for herself. She teaches Pakhi to not tolerate anyone’s misbehavior. She proves that she is a strong mother, who isn’t scared of anyone. Vanraj gets glad to see Anupama’s brave side. Anupama wants Pakhi to speak up.

She tells them that she has slapped Siddharth, his pain will go away soon, but if he had crossed boundaries today, then Pakhi’s wounds would have never healed all her life. Vanraj angrily bashes up Siddharth. Rakhi intervenes to stop Vanraj. She calls Vanraj misbehaving. She ends Paritosh and Kinjal’s alliance. Rakhi and Vanraj get into a bitter argument. Baa asks them to stop fighting. Anupama asks Rakhi not to threaten them always. She tells that Rakhi can try to break the alliance, but Kinjal will never leave Paritosh. Kavya watches the family drama.

furthermore, Pramod supports Anupama, which angers Rakhi. Mrs. Desai realizes that Anupama is right. She slaps Siddharth. She is upset that he had proved her upbringing wrong. She likes Shah family. She asks Rakhi to value Shah family and not break the alliance. She asks Rakhi to let Kinjal marry Paritosh. Siddharth leaves with his parents.

Anupama realizes that she left Paritosh’s sherwani at home. Rakhi makes Paritosh and Kinjal engaged in Anupama’s absence. Anupama gets a shock when she returns with the Sherwani. Rakhi tells her that Vanraj didn’t wait for her return and went ahead with the engagement. She taunts that Anupama has zero value in the family. Anupama gets upset. Rakhi plans to create a rift between Vanraj and Anupama.

Reviewed Rating for this particular episode Anupama 1st October Written Update Vanraj unbridled rage: Highly dramatic episode. Vanraj and Rakhi’s bitter quarrel becomes a highlight. Anupama proves her righteousness once again by a solid lecture for Siddharth and his parents.5/5
This rating is solely based on the opinion of the writer. You may post your take on the show in the comment section below.