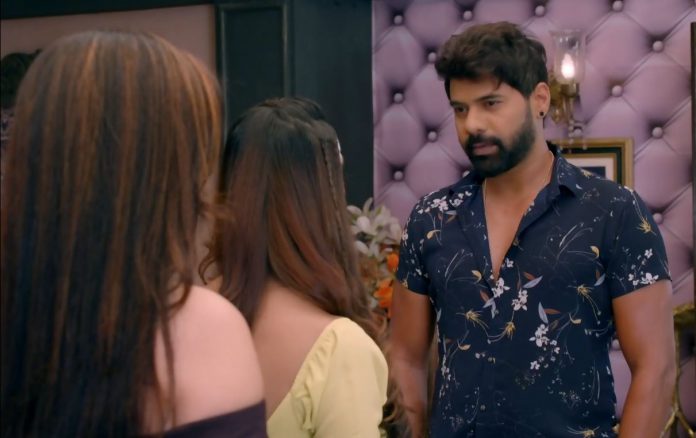 Kumkum Bhagya 2nd October Update Rhea’s plan backfires Ranbir calls up Pragya to share the updates about the accident case. Pragya isn’t in any state to understand. Sarita speaks to him. Pragya wants to know what does he want to tell them. Ranbir tells that he has nabbed the truck driver, he is waiting for him to get conscious, the driver seems to be a contract killer. He tells that the driver was outside the hospital, where he had seen him. He tells that he got the driver to his friend’s house.

He asks Pragya to come there to get justice for Prachi. Sarita assures to send Pragya. Pragya doesn’t want to leave Prachi alone and go. Sarita tells that Abhi will get his daughter to donate blood, but Pragya should go and find the culprit. Pragya makes a leave without waiting for Rhea. On the other hand, Abhi confronts Aaliya and Rhea about her statement that she wants to see Prachi dead. Aaliya defends Rhea. He tells that Rhea can’t wish Prachi to die, which isn’t acceptable.

He tells that Prachi is fighting for her life, she is in need of blood, she is also like her daughter. Aaliya tells that Rhea is his daughter. He tells that Prachi has done a lot for the family, she made many sacrifices for Ranbir. She tells that Prachi never wished them to die, when they did wrong with her. He feels ashamed of Rhea. He was thinking to take Rhea’s help to save Prachi. Aaliya argues with him to anger him further.

He asks Aaliya not to encourage Rhea always. He wants Aaliya to feed good values in Rhea. He realizes that even Aaliya wishes Prachi to die. Meera and Mitali come to hear the argument. Abhi doesn’t give any chance to Rhea to clarify. Meera wants to know the matter. Abhi asks Meera to ask Rhea, what is she wishing, she was wishing Prachi to die. Rhea shivers in fear. Aaliya makes her lie again. Rhea tells that she didn’t mean to hurt Abhi’s sentiments. Aaliya lies that Rhea was concerned for his emotional breakdown if Prachi dies.

Aaliya tells that Abhi misunderstood Rhea. Rhea turns the tables and lies that she can never wish anyone to die. Abhi falls in their trap and believes them. They cleverly trick him. Abhi makes an apology to Rhea and Aaliya. Aaliya asks Abhi not to let his love for Prachi affect Rhea. Abhi asks Rhea to help him. He tells that she has to donate blood to Prachi.

She tries to avoid it. He knows that she is scared of injection. He tells that its important to donate blood to Prachi. He assures that he will be with her. Aaliya gets irritated by Mitali’s interference. Rhea wanted to get Prachi’s dead news. She wants to avoid going to the hospital. She tells Abhi that she can’t come along, she is getting blackouts. Abhi gets hurt. Rhea thinks Dadi can stop Abhi from leaving. Abhi tells that there is no time to waste, Prachi needs blood. Rhea asks him to get the aid done else he can’t drive.

He asks Rhea to donate blood to Prachi, he is also coming in sometime. Meanwhile, Ranbir waits for Pragya’s arrival. Pragya reaches there. Ranbir tells her about the truck driver. Pragya wants them to bring the driver to senses. Aaliya feels Abhi will go to meet Prachi at her home, Pragya can meet him and they both can realize the truth. She doesn’t want Pragya to come home. She can’t lose Rhea. Rhea hates Prachi a lot.

She is helpless to donate blood to Prachi. Abhi stays anxious since he has to see Prachi. Dadi asks Abhi about his relation with Prachi. Abhi praises Prachi, who is just like his daughter. Rhea spends time listening to music in her car. Abhi calls her to know if she has donated the blood. Rhea lies that she just reached. He asks her to donate the blood and inform him.

Reviewed Rating for this particular episode Kumkum Bhagya 2nd October Update Rhea’s plan backfires: 5/5
This rating is solely based on the opinion of the writer. You may post your take on the show in the comment section below.