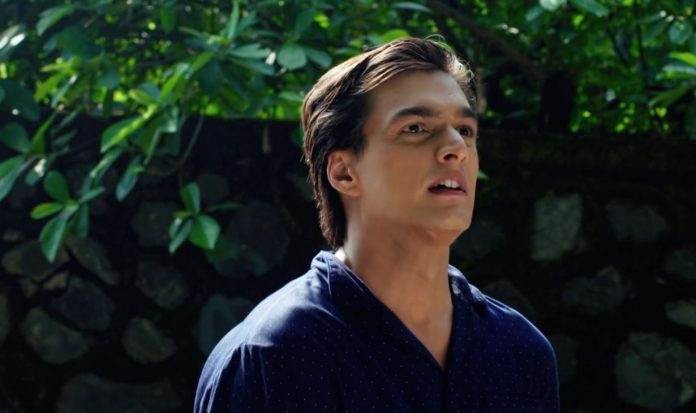 Yeh Rishta Kya Kehlata Hai 2nd October Unexpected entry Kartik and Naira have a fight for the blanket. He tells that he will just switch off the AC. She doesn’t want to off the AC. She tells that he can stay awake all night if he wants. He wants to sit guarding her. She tells him that he may stay awake like an owl and then sleep in the day time when she may be going for her delivery.

She tells that their daughter may come anytime and he may be sleeping at home. He tells that this may happen, so he won’t sleep even in the day. She laughs at him. She thinks of Krishna. She wants to know if Krishna is sleeping well. Kartik tells her that Krishna is their responsibility now. They have a cute talk. She insists him to read out a bedtime story so that she can sleep well. Kartik agrees.

Meanwhile, Krishna asks Krish about his name, but he doesn’t answer. Krish loses in the game while he answers her. He angrily shouts on her. This upsets Krishna. Dadi supports Krish. She rebukes Krishna for trying to bond with Krish. Krishna cries on hearing Dadi’s scolding. Kartik and Naira have a romantic moment. Kartik sleeps first. Naira laughs that he has slept in peace while putting her to sleep.

She was scared like she lost him. She feels glad to have him. Naira feels restless. She goes out of the room to see Krishna. She tells Krishna that she is feeling restless. Krishna tells that she will tell Kartik to take Naira to the hospital. Naira tells that she will stay at home, she isn’t too serious. Naira tells her about Kairav’s birth time. They have a long talk and sleep on the sofa in the living room.

Dadi spots them in the morning. She thinks Naira had to sleep in discomfort because of Krishna. She wakes up Naira, who experiences pain again. The family worriedly take Naira to the hospital. Dadi doesn’t want to wake up Kartik. Naira asks Gayu to wake up Kartik and inform him about her hospital trip if the labor isn’t a false alarm this time. She tells that she will make a call once doctor examines her. Naira meets the doctor. The doctor tells Naira that delivery is close, she will be rushed to the OT now. Naira is shocked that Kartik isn’t there. She shouts to Kartik. Kartik wakes up as if he heard her calling.

He looks for Naira. Krishna meets him and tells him that Naira has gone for the delivery, she was experiencing labor pain. Kartik can’t believe that his daughter is coming when he isn’t prepared. He wants to see Naira. Naira tells the nurse that she won’t go to the OT until Kartik comes. Nurse tells that baby will not wait for anyone, they have to go. Naira disagrees. Kartik runs away from the house.

His car breaks down when the fuel gets over. He faces a worse time when he fails to get any lift. He worriedly thinks what to do. The family wishes that he reaches the hospital in time. Kartik pays a man and borrows his cycle. He drives the cycle and tells Naira that he is coming to the hospital.

Naksh takes the family to the hospital. He doesn’t see Kartik on the road. He gets irritated by the milkman driving in front of his car and blocking his way. Devyaani tells that the milkman is wearing clothes like a hero. They get surprised seeing Kartik as the milkman. Kartik is happy to see Naksh. He hugs Naksh and tells that he really loves him. He asks Naksh to take him to the hospital soon. Naksh laughs seeing his madness. Kartik gets a bad dream and imagines that Naira is undergoing a surgery.

He doesn’t want to be away from Naira at the time of the delivery. He is still trying to reach the hospital. After reaching the hospital, Kartik meets Naira and ensures that he will have security doubled at the hospital so that they don’t lose their newborn like the last time. Naira’s old doctor comes for her delivery. He recalls the way Naira insulted him last time. He refuses to deliver her baby, which adds up troubles and lots of drama. Kartik tries hard to convince the doctor to operate Naira.

Reviewed Rating for this particular episode Yeh Rishta Kya Kehlata Hai 2nd October Unexpected entry: 5/5 Episode filled with romantic and funny moments. Hilarious Kartik was the best today.
This rating is solely based on the opinion of the writer. You may post your take on the show in the comment section below.

Catch up the last episode update below: