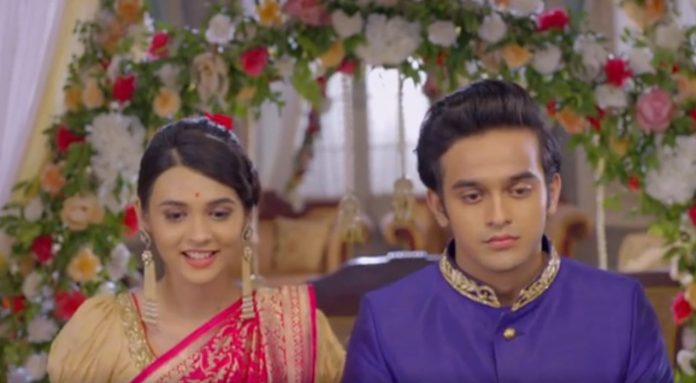 Barrister Babu 5th October 2020 Update Upcoming twists Sampoorna doesn’t want Anirudh to marry Saudamini at any cost. She can’t see Bondita’s marriage breaking because of her. She wants to meet Anirudh and tell him the entire truth, even if the truth damages her own marriage. She isn’t scared of losing Saurabh now, since she feels much guilty by her younger sister’s big sacrifice.

She can’t let Bondita face the threatening humiliation in the village because of her. She knows Bondita is tolerating everything, and still keeping silence to keep the promise. She feels indebted to Bondita. She reaches the haveli when Saurabh asks her to work in the engagement preparations. Saurabh limits her from speaking to Anirudh or anyone else about Bondita. Sampoorna gets determined to find a chance to reach Anirudh.She tries to avoid the other family members to find Anirudh alone. Sampoorna struggles a lot and finally reaches Anirudh. Saudamini prepares for her engagement function. She is very happy to see Anirudh. She gets decked up as the bride. The dancer is seen performing in the engagement function. She is the same woman Rasila, whom Bondita helped in the village, when no one else came forward to hand over a glass of water to the needy.

Rasila performs in the rich landlords’ party. Saudamini likes the grand arrangements and is all smiling. She hides the happiness from Anirudh, since she plays the same drama of blindness in front of him. She wants Anirudh to not go anywhere and sit with her. Saudamini tries different ways to get his attention and sympathy. Anirudh feels uneasy to see the engagement celebrations, since his heart misses his wife and friend Bondita.

Rasila happens to know that Anirudh is Bondita’s husband. She stops his engagement. She reminds Anirudh about his vows to Bondita at the time of marriage. She tells him that he has abandoned Bondita and forgot all his promises, which resulted in Bondita’s humiliation in the village. Anirudh is shocked to know about Bondita’s huge troubles. Sampoorna apologizes to Anirudh. She reveals the truth to him.

She tells him that Bondita had lied because of her. She tells that Bondita had gone to Brijvasi to save her sister’s marriage, Brijvasi fooled both of them by his sugary words, Bondita is innocent. Anirudh is moved on knowing the truth of Bondita’s promise to Sampoorna. He rushes to meet Bondita. He takes a cycle to drive his way to her. He leaves the engagement and also Saudamini behind, to keep his promise to little Bondita.

Reviewed Rating for this particular episode Barrister Babu 5th October 2020 Update Upcoming twists: 5/5
This rating is solely based on the opinion of the writer. You may post your take on the show in the comment section below.