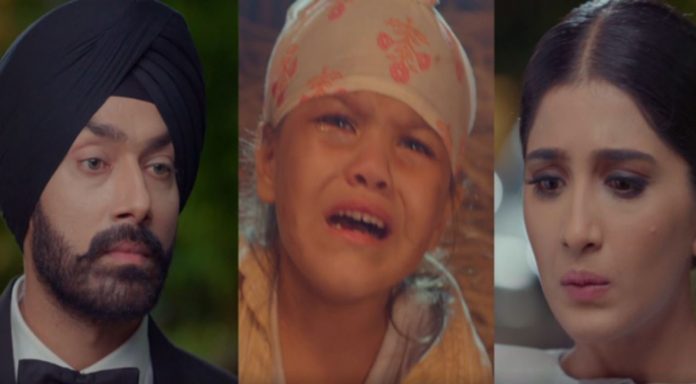 Choti Sardaarni 4th October 2020 Written Update Sarabjeet Meher ousted Angel screams and wants Meher and Sarabjeet to remove the herbal paste from her legs. She doesn’t listen to them. Meher gets an idea to convince her. She tells Angel that she will make Jalebis for her. She realized that Angel loves Jalebis, as seen in her picture. Martha gives Meher a chance to treat Angel. Meher tells Angel that she will also make Samosa for her.

Meher takes Angel’s promise to keep the herbal paste for some time. Sarabjeet wants to help Meher. He tells Martha that Angel will cry and get angry if she gets bored. Martha lets him help Meher. Martha keeps Angel occupied till Meher gets the hot Jalebis for her. Angel grows restless to get rid of the herbal paste. Meher and Sarabjeet keep Angel entertained. Meher presents the snacks quickly. Sarabjeet dances for Angel to keep her mood better. Angel loves the snacks and sweets. Meher misses her children a lot.

Meanwhile, the kidnapper tells Param that his parents don’t love him, maybe they won’t come to save him. Param gets worried. The family tries to arrange 50 crores to pay the ransom to the kidnappers. Kulwant tries to handle the situation her way. She meets Michael and asks him to just handle the local kidnappers. She asks the man to save her grandson Param. Manav reaches Serbia for Meher’s sake.

Meher and Sarabjeet take care of Angel. They feed her well and put her to rest. Meher gets hopeful of Angel’s recovery. She feels sad for Sarabjeet, who had a stressful day. Sarabjeet and Meher care for each other. He tells that they will overcome the test and go back to their children soon. She reminisces Param on seeing the moon. She sends her message to her children through the moon, that’s common between them.

Param connects to her on seeing the moon. He recalls Meher’s words to subside his fears. She wants Param to face his fears rather than giving him hopes. He tries to run away from the kidnappers’ den. He succeeds to run out of the godown. He wants to reach his family. Meher and Sarabjeet have worked hard after Angel. They want a miracle to happen. Meher wants Martha to forgive them once Angel gets fine. Param gets glad to find Surya around. Surya instructs Vikram’s assistants and briefs them about the kidnapping case.

Before Param reaches Surya, the kidnapper catches him. Meher takes her phone from Martha. Martha scolds Meher and Sarabjeet for doing the experiment on Angel. She tells them that Angel got an allergy due to the herbal paste. She yells at them that they didn’t treat Angel well. She throws them out of the house. Meher tells Sarabjeet that the herbal paste is doing the action on Angel’s legs. She tells that the treatment is working on Angel, Martha will know it soon.

They get pushed out of the gates by the guard. They fail to collect their phone and stuff. Sarabjeet tells that they just have one way, that’s to wait for Martha. The kidnapper drags Param back to the godown and bashes him. He realizes that Param’s family is taking help from the police. He decides to kill Param after taking the money.

Reviewed Rating for this particular episode Choti Sardaarni 4th October 2020 Written Update Sarabjeet Meher ousted: 3/5
This rating is solely based on the opinion of the writer. You may post your take on the show in the comment section below.