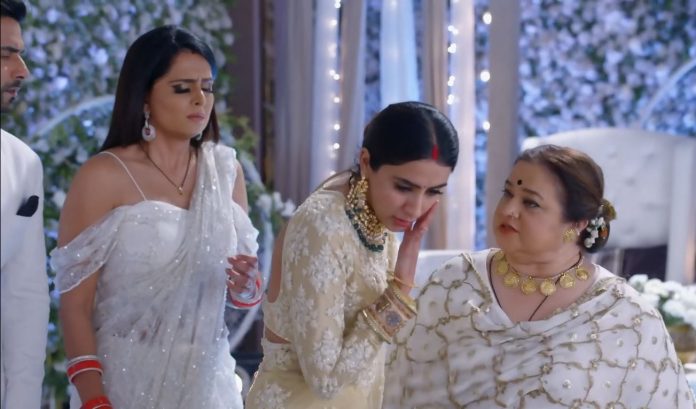 Kundali Bhagya 8th October 2020 Written Update Mahira’s shameless act Mahira gets drunk and creates a scene to insult Luthra family. Kareena gets angry that Preeta is insulting them by drinking so much in front of them. She wants to slap Preeta. Ramona stops her and tells that Preeta is Bahu of the family, they should avoid creating a scene. Sarla wonders why is Preeta drinking and misbehaving with the elders. She thinks what’s wrong. Rakhi asks Sarla about Preeta’s values. Mahira gets the family upset.

Rakhi doesn’t want Preeta to ruin the family name. She didn’t expect this from Preeta. Sarla tells Rakhi that it can’t be Preeta, since she knows her daughter well. Mahira unveils herself. She comes in front of everyone. She dances with Karan and shocks the family. Rakhi realizes Sarla was right, its not Preeta, but Mahira. Mahira brings more humiliation for the family by acting cozy with Karan in front of the guests. She gets shameless in her attempt to woo him. Sarla wonders where is Preeta. Luthra family feel ashamed of Mahira.

Karan distances Mahira from her. Mahira doesn’t stop there. She introduces herself as Karan’s wife. Sarla asks Karan about Preeta. She doesn’t think Preeta will go on her own. Mahira tells the family that she is Karan’s wife, he was engaged to her and their marriage has happened. She lies to the guests. Rishabh asks the guests to have food, until he sorts the family matter. He also wants to know where is Preeta.

Sarla demands to know about Preeta. Mahira stops Sarla from questioning her. Rishabh wants Mahira to answer them. Karan gets mad at Mahira. Mahira asks Kareena to support her, since she always promised her. Sarla tells the family that Preeta didn’t send any legal notice to the Luthra family, she can never hurt the family. She knows her daughter well. She tells them that Preeta can never put them behind bars. Sherlyn stops Sarla from defending Preeta. She tells that Preeta had tried to harm Mahesh before. She counts Preeta’s mistakes.

Sarla knows Sherlyn is just accusing Preeta. Sarla warns Sherlyn. Sherlyn creates another scene by claiming her rights on Luthra family. She blames Preeta for insulting the family again. She tells that Sarla didn’t know that Preeta was going to marry Karan. Sarla tells that Preeta had married Karan for a reason, since she knew what is Sherlyn up to. Mahira asks Sarla to stop blaming her. Sherlyn and Mahira don’t let Sarla speak up.

Sherlyn feels Mahira is right, since Kareena promised to get Karan and Preeta married. Mahira reveals that Preeta has eloped with Prithvi. Sarla doesn’t accept this nonsense. She tells that Preeta loves the Luthra family and respects them equally as her own family. Mahira asks for her rights. Sarla slaps Mahira. Furthermore, Shrishti reaches Pawan’s house. She wants to hide from the guards and get inside. She encourages herself. She wants to save her sister some how. Sarla faces Kareena’s wrath after slapping Mahira.

Sarla can’t tolerate anything against Preeta. She wants Luthra family to support their Bahu. Sarla tells Sherlyn that Preeta had come to Luthra house on Karan’s invite to witness the marriage, but she had to marry Karan for a noble intention. She tells them that Karan had also come to Preeta’s marriage and married her by cheat. She defends her daughter. Preeta tells Pawan that Prithvi isn’t conscious, the matter can’t happen. Pawan promises to get the marriage done. Karan gets angered when Sherlyn and Mahira accuse her. Karan takes a stand for his wife.

Reviewed Rating for this particular episode Kundali Bhagya 8th October 2020 Written Update Mahira’s shameless act: 4/5
This rating is solely based on the opinion of the writer. You may post your take on the show in the comment section below.