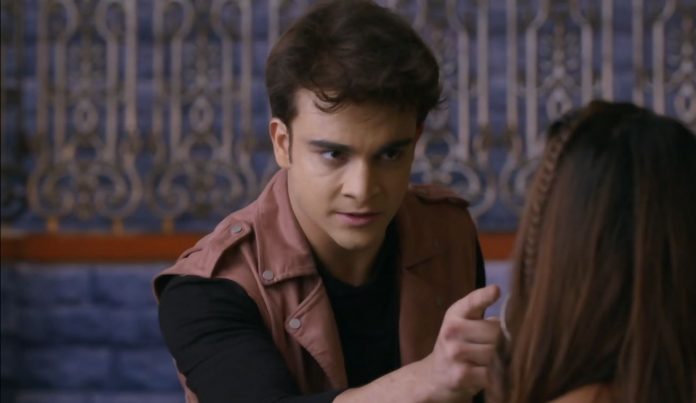 Kumkum Bhagya 12th October 2020 Written Update Ranbir rebukes Rhea Rhea berates Aaliya for keeping her away from her mother and sister. She feels Aaliya knew the truth, also the fact that Abhi wanted his wife to return. Aaliya tells that Prachi isn’t her sister. Rhea gets the pictures to show to Aaliya. She is much hurt that Aaliya has cheated her and broke her trust. She asks Aaliya why didn’t she stop her from making such a mistake when she tried to kill her own sister. She questions Aaliya. Aaliya falls in her eyes.

On the other hand, Ranbir cares for Prachi and pleases her a lot. Prachi asks him why did he show care for her in front of her family. He tells that he was helping her. She tells him that his help will give reasons to her family to tease her. Ranbir gets a call from Aryan, who informs him about Rhea’s return home. Aryan tells Ranbir that Rhea was crying a lot. Ranbir wants to confront Rhea. He tells Prachi that he needs to go home.

Prachi asks him not to involve himself in Rhea’s matter. He can’t promise her. He asks her to get well soon. Prachi sees the old family picture album. She happens to see her baby sister’s picture. She shares her feelings with her sister. She tells about her love for Ranbir. Meanwhile, Aaliya tries hard to convince Rhea that she loves her. Rhea doesn’t love Aaliya anymore. She doesn’t want Aaliya to play any more mind games with her.

She asks Aaliya why did she lie about Prachi and instigate her against more. She was bonding with Pragya, without knowing her rights on her. She feels Aaliya has distanced her from Pragya forever. Rhea tells that Pragya has much love and affection for strangers too, she gave her much love without knowing their relations. She blames Aaliya for keeping the family broken apart and filling hatred in her mind against her mother. She wants the blood relations to unite. She declares that she will unite her family, she will tell the truth to everyone about Pragya.

Aaliya wants Rhea to stay in her control. Rhea tells Aaliya that she hates her. Aaliya doesn’t want to lose to Pragya. She hates Pragya more than before. Abhi wakes up and gets pampered by the elders of the family. He feels blessed. Biji tells Abhi that Rhea wanted to meet him and tell him that Prachi is her sister. He wants Rhea to accept Prachi and treat her well. Biji wants him to bring Pragya home. Abhi shares light moments with her. He wants to meet Rhea. He misses his Dadi. Rhea cries in repentance. Ranbir meets Rhea to express his hatred towards her.

He asks her attempt to kill Prachi. He tells her that she can’t kill anyone if she dislikes her. He tells that she has lied a lot to him. He reveals that the truck driver is caught, who admitted the entire truth about her evil plotting. Rhea cries out to express her regrets. Ranbir feel he is foolish to always believe a wicked girl like her. He tells that he always liked her, he didn’t know that she started hating Prachi. He wants to hate Rhea now.

He feels Rhea cheated him and also Abhi. He adds that she isn’t loyal to anyone. Rhea tells Ranbir that she wanted to get his love. Ranbir rejects her love and also her friendship. He tells that he will always hate her all his life to teach her a lesson. He tells that Prachi was about to die, it was tough for Pragya and him to see Prachi near death.

Aaliya finds Rhea shattered. Aaliya thinks its good that Ranbir has given this shock to Rhea, who would not be able to overcome it. She is sure that Rhea won’t be going to meet Pragya now. She wants to plan something before Rhea gets stable mentally. Rhea wants to meet Pragya and tell her the truth. Ranbir finally confesses love to Prachi. Will Prachi accept his love? Keep reading.

Reviewed Rating for this particular episode Kumkum Bhagya 12th October 2020 Written Update Ranbir rebukes Rhea: 4/5
This rating is solely based on the opinion of the writer. You may post your take on the show in the comment section below.