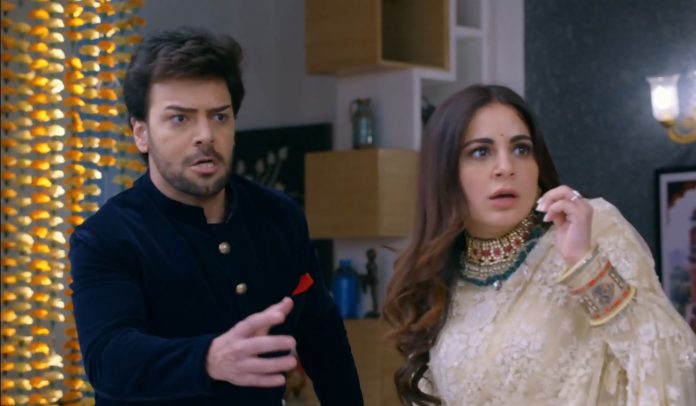 Kundali Bhagya 14th October 2020 Written Update Prithvi’s madness Prithvi tells Pawan that he wants to see Karan’s defeated face. He asks Pawan to never hurt Preeta. He tells that he can hurt Shrishti, but not Preeta. He adds that Preeta is very much delicate like glass. He wants to keep Preeta with extra care. He warns Pawan against hurting Preeta. Janki gets free from the goon’s clutches. The goon wants to inform Pawan that she has run away.

Prithvi doesn’t want Janki to remember anything, else everything will be finished. He asks Gabbar to just kill Janki if he sees her. He sends Gabbar away. Janki overhears their conversation. She stays alert. Prithvi knows that Pawan has brought Preeta for him. He tells that Janki has to be found, she may create many problems for them. He thinks Preeta will be glad to see him. He goes to help Preeta.

Preeta shouts at him. He tells her that he can’t see her hurt. He apologizes to her. Preeta tells him that his brother Pawan is psychotic. She scolds him. Prithvi asks Shrishti to relax and talk calmly. He tells Preeta that he would have never done this with her. He wants Preeta to come with him for a talk. Shrishti stops Preeta. Pawan points a gun at Shrishti. Prithvi asks Pawan not to hurt Shrishti. Janki attacks Pawan.

Prithvi attacks Janki to stop her from stabbing Pawan. Janki gets a hit on her head. She regains her lost memory. Prithvi shouts on Janki for attempting to hurt his brother. He shows his true side to Preeta. He drags Preeta with him. Preeta asks him how could he attack Janki. Prithvi tells her that Janki tried to kill Pawan, he had to faint her down to stop her, else he would have lost his brother. He tells that he loves Pawan a lot.

Preeta tells him that Pawan is harassing her, he had kidnapped her and kept her at gun point. She tells that even if Mahira manipulated him, he is wrong. Prithvi asks Preeta what did Pawan say. Preeta tells him that she was destined to marry Karan. She had clearly refused to marry Prithvi. She reminds that he had accepted her decision maturely, but Pawan isn’t agreeing to it. She tells that Pawan wants them to get married. Prithvi calls it a misunderstanding. She tells that Pawan has a misunderstanding. Prithvi tells her that she is mistaken, he didn’t accept her marriage with Karan, he still has the same wish to marry her.

He doesn’t accept Preeta and Karan’s marriage. She asks him if Pawan has said the right thing about him. She feels he is also mad like Pawan. Prithvi tells her that he won’t let her go anywhere, he will marry her and take her home. She wants to go to Karan. He reminds her that Karan abandoned her twice. He wants to marry her for love, not for revenge. She tells that Karan and her marriage was in their fate. Prithvi raises a hand on her, while she boldly stops him. Karan misses Preeta a lot. He thinks of their marriage rituals. He can’t believe that she left him for the sake of Prithvi. He finds Preeta’s sarees in the cupboard.

He gets sure that she can’t run away leaving him. He hopes she comes back. Sherlyn wants Mahira to talk to Karan. Shrishti worries for Janki. Pawan tells her that Janki isn’t dead. Shrishti asks Pawan not to insist Preeta and Prithvi’s marriage. Janki recalls her accident done by Prithvi and Sherlyn. She tells Shrishti that she has recalled everything. Preeta feels Karan was always right. She realizes her mistake of trusting Karan. Prithvi wants her to just remember his name. Sherlyn tells Mahira that Karan and Preeta are madly in love. She wants to take a step to separate them.

Reviewed Rating for this particular episode Kundali Bhagya 14th October 2020 Written Update Prithvi’s madness: 3/5
This rating is solely based on the opinion of the writer. You may post your take on the show in the comment section below.