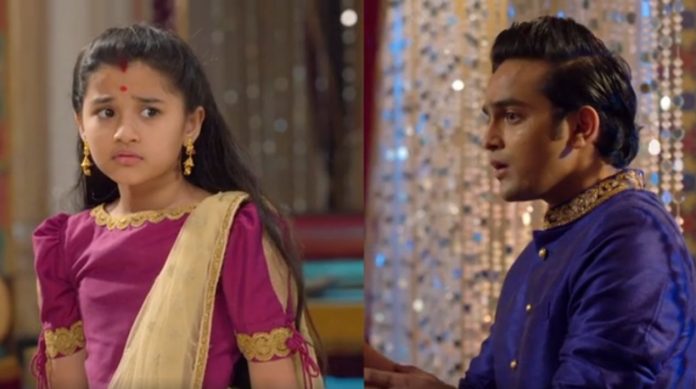 Barrister Babu 14th October 2020 Written Update Next hint for Anirudh Anirudh reaches the brothel while finding Bondita based on the sweets order made by a lady from the brothel. He follows the person who is taking the sweets to Bondita. Bondita wants to worship Durga Maa first and then have the sweets. He doesn’t know that Tara Bai has kept Bondita at the brothel by fooling her.

He feels so terrible that Bondita is stuck at such a horrible place. He tells that he will search for her in every corner of the place. His search goes on frantically, but he doesn’t reach Bondita. Anirudh learns that the sweets are taken to Hira Mandi, where Rasiya Bai works. He thinks to take Rasiya’s help in finding Bondita, since she is aware of Bondita. He looks for Rasiya and comes to the brothel.

Bondita believes that all the girls have Durga in them. She gives the sweets to everyone in the brothel as she happily celebrates the Durga puja festive. She finds one of the girls hurt and becomes the first to sympathize. She can’t see anyone in pain. Tara Bai doesn’t want anyone to support Bondita. Anirudh reaches the brothel with his wounded hand.

He doesn’t feel any pain, because he is determined to find his wife and take her home. Bondita does the aid to the girl, while Tara Bai asks her to wash off her hands to eat her favorite sweets. Bondita’s haldi falls over Anirudh’s wound just like before and cures his wound. Anirudh takes it as another sign that Bondita is around. He can’t help but think of her. Tara stops Anirudh from seeing little Bondita.

She separates them once again. Anirudh finally meets Rasiya at the brothel to take her help. She doesn’t talk to him since she felt insulted at his house. She reprimands him for being dual faced and doesn’t acting like he preaches. She tells him that he has done wrong to leave his wife and ruin her life. She is hurt that he ruined Bondita’s life. She isn’t aware that he has come to ask about Bondita.

Rasiya doesn’t want to entertain Anirudh further. She kicks him out of the brothel. Tara Bai learns that Anirudh is Bondita’s husband, who came there looking for Bondita. She makes a plan to send Anirudh away from there. She doesn’t permit him to enter the brothel again. She takes the help of the cops to send Anirudh away. She makes him wait for her, to show that she is the queen of the brothel. She performs in front of Anirudh, while he wants to ask about Bondita. Rasiya ignores Anirudh angrily, since she is much disappointed with him. He knows her anger is due to her real concern for Bondita, which is a positive sign.

Anirudh is left with no option than to kidnap Rasiya at night. He waits for Rasiya to leave the brothel. He gets a chance to kidnap her. He wants to convey the truth to her that Bondita is missing and he has come to find her. He pleads that he has come to just find his wife. He shows Bondita’s sketches to Rasiya to win her trust. He tells that he has found out that Bondita is in the brothel.

He tells her that he doesn’t care for his name, family or respect, he just cares about his missing wife, who is in deep trouble. He has promised Sumati that he will find Bondita and bring her home. Rasiya is shocked to know that. He begs her for help. How will Anirudh reach Bondita? How will Rasiya help him? Stay tuned to know more on this show.

Reviewed Rating for this particular episode Barrister Babu 14th October 2020 Written Update Next hint for Anirudh: 3/5
This rating is solely based on the opinion of the writer. You may post your take on the show in the comment section below.