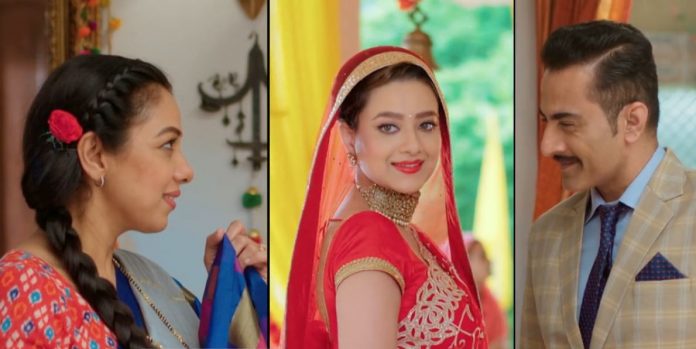 Anupama 15th October 2020 Written Update Kavya Vanraj wedding Kavya gets shameless to admit the truth to Paritosh. She tells him that she will tell the truth to Anupama and family, so that she can explain them at once. Paritosh stops her and gets tensed. She tells them that Vanraj and Anupama don’t have love in their marriage, its just a compromise.

She tells that Vanraj is with Anupama for the sake of children, Vanraj just loves her. She asks him to stop the marriage if he can. Paritosh finds her relly strange. He weeps thinking of Anupama. He makes a leave, while she calls Vanraj to inform him that Paritosh learnt the truth. Vanraj gets much worried. He asks how did Paritosh know. She tells that Nandini told him. He asks how did Nandini got to know about them.

She tells that Nandini got to see the registration slip. He tells that she could have told him to handle it. She asks him to handle it now, since everyone will know it soon. He rebukes her for ruining his family life. She didn’t think of it. She worries that he can get annoyed and break the marriage. She wants to marry him. Anupama doesn’t know Kavya’s truth. Vanraj is called for the family photo. He tries to ignore Paritosh. He is much tensed.

Paritosh stares at him angrily. Sanjay tells Vanraj that Paritosh got to know everything. Vanraj keeps his fake smile in front of the family. He tells that he will handle Paritosh. Devika stays back with Anupama and teases her about the first night. Anupama is shy. She tells that she has three children, she will not plan anything such. Devika tells that she will not leave Vanraj without getting a Nek from him. They have a fun talk.

Vanraj wonders how will he face Paritosh. Paritosh meets him. He confronts Vanraj for cheating Anupama. He tells that Vanraj was his hero, but not anymore. Vanraj admits that he has an affair with Kavya. He plays a drama. He apologizes to Kavya. He tells Paritosh that he had an arranged marriage with Anupama and didn’t find love between them, Anupama wasn’t compatible with him, he met Kavya and had an affair with her, finding her similar to himself.

Moreover, Vanraj tells that affair has ended long time back, Kavya is getting insecure and forcing him for marriage. He lies about Kavya, who is getting divorced with Anirudh. Paritosh tells that he has seen the registration slip himself. He confronts Vanraj about the marriage decision. Vanraj tells that he isn’t marrying Kavya, he loves Anupama and had the breakup with Kavya long time back. He further adds that he can’t hurt Anupama, he is already guilty and didn’t tell her the truth.

He lies that he just wants to marry Anupama again. He accepts his mistake and melts Paritosh’s heart. Paritosh forgives him seeing him regret for his mistakes. He tells that he will handle Kavya’s madness. He asks Vanraj to just keep Anupama happy. Anupama gets tea for Vanraj. She falls down and gets hurt. She doesn’t overhear their conversation. Vanraj and Paritosh worry for Anupama.

Vanraj shows fake care for Anupama, which makes Paritosh believe him. Vanraj is relieved. Later, Kavya calls Vanraj and informs him the marriage mahurat. She asks him to be there on time. Vanraj tells that he has handled Paritosh. Baa tells Vanraj that he can’t leave the home before the marriage mahurat. Vanraj gets troubled. Anupama gets another cup of tea for Vanraj. They go to the room for a talk. Vanraj romances Anupama to cheat her once again. He traps her into his sugary words. He wants to marry Kavya.

He asks Anupama to help him attend his meeting in the morning. He tells that he can’t tell his boss that he is marrying once again in this age. He emotionally blackmails Anupama and convinces her. Anupama permits him to go for the meeting. Vanraj is thankful and praises her. He thinks she is too innocent and helping him in his second marriage. Vanraj goes to marry Kavya. Anupama will soon learn Vanraj’s truth. What will she decide then? Keep reading.

Reviewed Rating for this particular episode Anupama 15th October 2020 Written Update Kavya Vanraj wedding: 3/5
This rating is solely based on the opinion of the writer. You may post your take on the show in the comment section below.