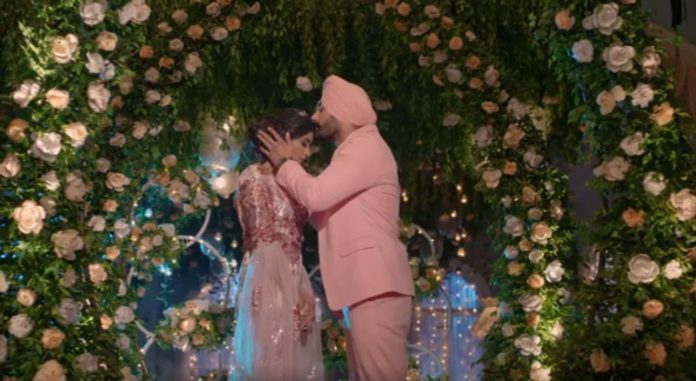 Choti Sardarni 16th October 2020 Written Update Romance twists Sarabjeet and Meher return to India to their family. Meher gets emotional on meeting her children. She apologizes to Param for not being there to help him. Sarabjeet too feels sorry that Param had to go through a lot in their absence. Param is glad to see them back and asks them about his little sister. He wants his little sister soon.

Sarabjeet promises to bring a little baby soon while teasing Meher. Sarabjeet still isn’t convinced with Vikram’s reason for following them to Serbia. He wonders if Vikram was really on his work duty. Manav lies to him well, but doesn’t win his trust. Sarabjeet doesn’t behave well, since he has seen Aditi in sorrow.

He wants to fix things after meeting Vikram and Aditi together. He thinks a direct talk will be good to sort their issues. He wants to know if there is some other woman in Vikram’s life. He invites Vikram and Aditi for the anniversary party. Manav returns home and meets Aditi. He stays distanced from her, since his heart just loves Meher. Aditi feels cheated since he has changed totally after their marriage.

The family is very happy to welcome Meher and Sarabjeet home. Meher proves the relations of heart mighty than the blood ties. Sarabjeet tells Karan that he has missed him a lot. Param doesn’t want Meher to cry now, since he is totally fine now. He asks Karan not to cry, since their mum has come. They have a happy family moment. Just like Manav unites with his mother. Seema asks him to give time to Aditi, who is part of his life.

She praises Sarabjeet who keeps Meher with so much love. She wants Manav to just focus on his marriage. She is sure that Aditi is the best life partner for him. He tells her that he has got too tired. He tells that he needs time. He makes a leave before Aditi comes. Seema tells Aditi that Vikram loves her, but is weak in expressing it. She tells that Vikram got the beautiful tiara for her. She asks Aditi to give him some time. Kulwant and her bahus get ready for the function.

Manav asks Aditi to get ready for the party. He is eager to see Meher. Aditi finds him rushing to meet Sarabjeet and Meher. She doesn’t understand the reason. Aditi knows that Meher’s lover, Manav was Vikram’s lookalike. She doesn’t know that Vikram is Manav himself. This truth doesn’t come in her mind. Manav gets a shock on arriving at Sarabjeet’s house. He finds Meher getting close to Sarabjeet. He can’t believe that she has forgotten their love and moved on with Sarabjeet.

Meher makes Param ready for the function. Param wants her to dress up Karan as well. Sarabjeet finds Meher happy and is happy too. He knows she is the best wife and best mother. He thinks he also looks handsome and will impress Meher by his looks. Meher doesn’t even notice him, being busy with her kids. Sarabjeet tries to ask Param about his look. Even Param ignores him. Sarabjeet wants someone to praise him. Meher bursts into laughter on seeing his antics. Manav wants to catch a glimpse of her.

Aditi asks Manav about her looks. Manav imagines Meher in her and gets happy. Aditi finds him smiling again and gets happy. She wants him to love her. He distances himself from Aditi. Sarabjeet asks Meher the reason for her laughter. He praises himself. She tells him that he is very cute, but not so handsome. He tells her that 100 girls used to be after him in college. She cracks a joke on him.

She tells him that she doesn’t care for him, since he isn’t a kid. He acts hurt to show that she cares for him. They have a happy time. He wants to just romance her. He tells her that he just loves her. She gets emotional seeing the thread ring on his finger. He tells her that he feels her close on seeing the thread tied by her. He feels her prayers will always protect him. She jokes on his funny behavior and common looks.

Sarabjeet tells her that she also doesn’t look so good. They have an argument. He ends up getting hurt. She gets another chance to laugh at him. She asks him to just see her when she gets ready. She turns up looking lovely. Sarabjeet doesn’t want anyone’s bad sight to catch her. He tells her that she will fall in love with herself if she sees herself with his eyes. He calls her the prettiest woman in the world. She feels she is the luckiest woman to get such a loving husband. They wish each other happy anniversary.

Sarabjeet and Meher deck up for the party and have their clothes twinning, looking perfect for their first anniversary party. Romance brews up between Sarabjeet and Meher. Everyone is happy to see the love between them. Meher feels lucky. Sarabjeet proposes her once again. Manav gets angered seeing Sarabjeet kissing Meher’s hand. He can’t tolerate Sarabjeet touching Meher. Meher wants Manav to see the truth that she moved on with Sarabjeet and accept it soon. She asks Manav to accept Aditi and move on in his life. What will Manav do now? Keep reading. Check this space if you are excited for the show’s news.

Reviewed Rating for this particular episode Choti Sardarni 16th October 2020 Written Update Romance brewing for MehRab:5/5
This rating is solely based on the opinion of the writer. You may post your own take on the show in the comment section below.