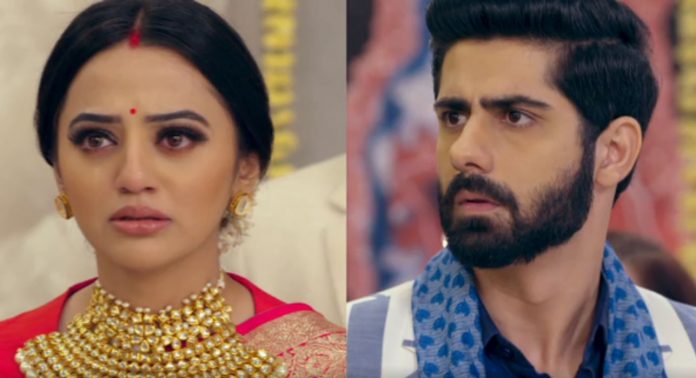 Ishq Mein Marjawan 17th October 2020 Written Update Riddhima finds murder footage Vansh is left shocked after Anupriya stabs the trident into her stomach. Anupriya tricks Vansh once again. She scares him by the thought that he will lose his mother once again. She puts Vansh in guilt after telling the very sobbing story of her past. She tells that she has always seen her lost son in him and also gave the love of her son’s share to him.

She tells that he has hurt her by doubting her, which she can never tolerate. On the top of it, when Riddhima blames her for the lies, Anupriya takes the drama ahead to get back in Vansh’s good books. She thinks Vansh will easily fall into her trap if the drama gets convincing. Vansh really falls in her words when she sheds crocodile tears and gets herself sounding too right. Vansh believes Anupriya like never before knowing she has lost her first child.

Vansh was thinking that she was really cheating him, since he never imagined that she would burn Uma’s painting. She reasons out that she had burnt the painting just to bring him out of the sorrowful zone. Vansh believes her every word, much to Riddhima’s shock. He was defending Riddhima and then changed in a moment. He gets defensive towards his mother, on knowing that Riddhima had been blackmailing Anupriya. Anupriya proves out to be cunning than Kabir.

Her instant plan makes Vansh breaks down into tears. Vansh has always regarded her a strong support. He still wants her to be a support for him. He recalls the way Riddhima had been suspecting Anupriya for the incidents in the house. Anupriya’s big swear clears her name from every blame. Anupriya tells him that there should never be any misunderstanding between them. She asks Vansh to never suspect her if he has saved her life now.

Vansh saves her from hurting herself. Anupriya mentions that she will never tolerate Vansh’s suspicion, since she has kept the promise to his dad to always love Vansh as her son. Vansh apologizes to her. Riddhima clearly understands Anupriya’s lie. She wants Vansh to understand Anupriya’s lies and find the truth. Vansh doesn’t listen a word against Anupriya from Riddhima. He doesn’t trust Riddhima.

The drama gets intense, since Vansh decides to bring out Riddhima’s truth next. Riddhima tries hard to defend herself, that she didn’t blackmail Anupriya before. She further exclaims that she had hidden Anupriya’s truth from him so that he doesn’t lose faith on his mother. Anupriya’s suicide move works in her favors. Vansh succeeds in saving Anupriya.

Later, Riddhima gets a pendrive which contains the proof of Ragini’s murder. She gets to see Ragini pleading for her life. She sees the murderer getting Ragini at the point of the gun. Ragini gets shot in the video, which gets shocking for Riddhima. Riddhima tries to see the man in the video, but just gets few details. She doesn’t realize his identity. Vansh wakes up at night and finds Riddhima missing. Riddhima stays busy with the video finding out the culprit. Vansh gets to see her spying again. Who is Ragini’s killer? Vansh or Kabir? Keep reading to know more twists and turns in the show.

Anupriya plans a big drama to mislead Vansh. She stabs herself to not to be called a stepmother again. She tells Vansh that she has always loved him as her own son. With this, she tries to end her life. The family is in shock, while Vansh gets his hand injured by the trident while saving his mum. Anupriya knew Vansh would do it. She asks Vansh why did he hurt himself. Vansh cleans the blood from the trident. He tells Anupriya that she doesn’t need to hurt herself. He goes away, leaving Anupriya and Riddhima to argue.

Anupriya doesn’t want Riddhima to fight her. She warns Riddhima to mend her ways. Vansh stays raged over Riddhima. He tells her that she can just give him pain. She tries to do the aid to his wound. He refuses to get the aid done. He feels she just hurts his heart always. Riddhima feels his pain. She accepts that she has hurt him, being his loved one. Chanchal and Aryan are relieved that they got saved once again.

Aryan tells Chanchal that they still have to be careful of Riddhima, since she can make Vansh against her. Chanchal is also afraid that Vansh will never spare them. Aryan wants her to leave the worries. He wants to keep an eye on Riddhima and her every move. Riddhima feels right on Vansh. She gets adamant to do the aid. Vansh tells her that she should trust him that he didn’t hide anything about Ragini’s matter. He wants her to stop herself from finding clues about Ragini.

He thinks she doesn’t trust him and his words. He feels short of faith as well. He tells that she would never trust him, the same way, like he will not trust her easily. He thinks she had never shared any secret with him. He knows that she is hiding a lot from him. He tells her that marriage is about getting close by hearts. He wants the suspicion to end between them. He tells that once the broken trust and hesitance ends between them, then they will have faith between them to start their relation. He wants her to trust him and not think anything against. Riddhima feels sorry. She doesn’t want Vansh to lose faith on her.

She tries to end their distance. Meanwhile, Vansh knows that many things are hidden from him. He didn’t know about Anupriya’s son. He lied to Riddhima about Sejal to find Riddhima’s secrets. He didn’t know that he will know such truth. Siya tells Vansh that its shocking for her as well, since she has heard Riddhima informing someone about Riddhima.

Siya tells him that she has heard Riddhima speaking to someone on the call, which isn’t a right thing. Vansh wants to know what’s Riddhima hiding. He thanks Siya for informing her. She has told Vansh about Anupriya’s cheat. She feels Riddhima cares for Vansh, since she got shot to save his life. She wants him to give time to Riddhima. She tells that few truths are better to stay hidden.

Reviewed Rating for this particular episode Ishq Mein Marjawan 17th October 2020 Written Update Riddhima finds murder footage:5/5 Mystery gets dragging
This rating is solely based on the opinion of the writer. You may post your own take on the show in the comment section below.