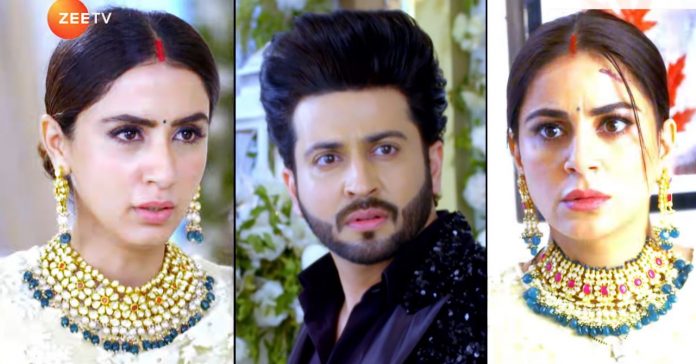 Kundali Bhagya 17th October 2020 Written Update Preeta exposes Mahira Pawan shoots at Preeta, but Janki comes in between to save Preeta. Janki and Shrishti ask Preeta to just rush away. They decide to go to Luthra house. Karan believes that Preeta will come back soon. Preeta doesn’t want her kumkum to get insulted. She wants to reach Luthra house at any cost.

Shrishti informs Sameer that Preeta got kidnapped, she is bringing him home. Sameer finds Sarla worried and tells her about Preeta’s kidnapping and rescue. Preeta, Shrishti and Janki escape and finally make it to the house. Sarla wants to see Preeta. She wonders how are her daughters. Preeta and Shrishti return to Luthra house with Janki. They tell Sarla that they are fine. Sarla is relieved to see them.

Preeta tells Sarla that Mahira got her kidnapped. Sarla is shocked. Mahira performs with Karan. She tells Karan that she is helping him just for the sake of his family. He is helpless to dance with her to show the police officer that Preeta is happy with him. Sherlyn has made this plan to bring Mahira and Karan close. Ramona makes the family realize that just Mahira can save them from defamation.

Rishabh can’t believe Karan’s desperate measures. He isn’t happy to see Mahira. Sherlyn has made the plan to help Mahira. Rishabh suspects Sherlyn seeing her cunning smile. He wants Sherlyn to change herself. He doesn’t know why Sherlyn supports Mahira for the wrong things. He wants her to respect Preeta, who is Karan’s wife now. Kritika tells that Preeta can’t be right always. She asks him why can’t he see Preeta’s flaws.

Rishabh wants everyone’s misunderstanding to end. Mahira tells Karan that he can’t love Preeta, who is harming his name and reputation by running away. Karan reminds her that she isn’t Preeta, she has just taken Preeta’s place for some time. Sarla is proud that Preeta is her daughter. She learns that Prithvi was forcibly marrying Preeta, but Janki and Shrishti saved her.

She is glad that Preeta has defeated Prithvi, Mahira and Pawan. She wants everyone to have a great daughter like Preeta. She knew that Preeta can’t leave the reception on her own. She tells that she has scolded Rakhi for not ousting Mahira. Preeta asks her why did she blame Rakhi. Sarla tells that Rakhi let Mahira stay in the house and spread her poison. She reveals what Mahira has done there in the party. Shrishti didn’t see an evil girl like Mahira. Sarla tells them that Mahira lied to everyone that Preeta has eloped with Prithvi. Preeta doesn’t want Luthra family to get defamed.

She tells Sarla that Luthra family is her family now, she will handle the police and also evil Sherlyn and Mahira. She wants the police to punish Mahira who ruined her reception. Sarla encourages her to fight Mahira. Shrishti asks her to slap Mahira. Sarla further reveals about Mahira producing the fake letter to defame Preeta. Janki tells Preeta that they shall expose Mahira’s truth and punish her.

Preeta tells them that she will expose Mahira after setting things right. She had promised Rakhi that she will not spoil the reception. She wants to take her place back in the family and maintain the prestige. She tells Sarla that she will make it clear to Mahira that none can harm her family. Sarla takes Preeta inside the house. Sameer, Shrishti and Janki support them. Rishabh gets helpless to dance with Sherlyn. Shrishti and Sameer make a plan to send Mahira away from Karan, so that Preeta takes her place.

Sherlyn wonders what is Shrishti planning. Sanjana and Ramona find Sarla and Janki back. Janki keeps the police officer engaged so that Preeta can take her place on the dance floor. Sameer drops the juice on the dance floor and makes Mahira fall down. He thinks Mahira will learn a good lesson. Karan apologizes to Mahira. He tells that he didn’t make her fall. Mahira sees Shrishti and understands her plan.

Mahira goes to clean her clothes. Sherlyn wants to know what is Shrishti trying to do. Shrishti and Sameer distract Mahira and run away. Preeta made the plan with them to lock Mahira in the guest room. Furthermore, Prithvi is heartbroken once again that Preeta escaped. Pawan tries to end his sorrow. Prithvi knows Pawan loves him a lot and can do anything for him. He knows Pawan is also angry. He doesn’t want Pawan to worry for him. He is angry on Preeta now.

Reviewed Rating for this particular episode Kundali Bhagya 17th October 2020 Written Update Preeta exposes Mahira:5/5
This rating is solely based on the opinion of the writer. You may post your own take on the show in the comment section below.