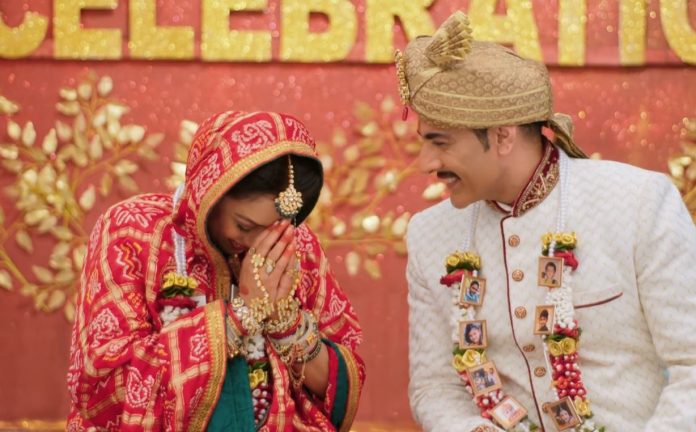 Anupama 17th October 2020 Written Update Twists in wedding Kavya gets mad to get Vanraj in her life. She wants to marry him at any cost. She can’t see him marrying Anupama. She wants to expose their relation to everyone so that she gets Vanraj. She is much upset that Vanraj didn’t come to the temple to marry her. She has been waiting for him for hours. She decides to go to his home and see him. Vanraj is worried that he isn’t able to marry Kavya. He messages her that he can’t come to the temple, he will marry her the next time. She faints in shock.

Anirudh reaches her and shoulders support. She gets angry on seeing him. She knows that Nandini has informed him and called him at the temple. She doesn’t want his support. He asks her to see the reality and accept it. He tells that Vanraj is going to marry Anupama for the second time, he isn’t able to marry Kavya for the first time. He tells that she will never be able to take Anupama’s place. Kavya doesn’t want to hear it.

He tells her that Vanraj is fooling her, she will be making a joke of herself, she is decked up as a bride and Vanraj is nowhere. He explains her that Vanraj will never accept her. He asks her to give him a chance, since they aren’t divorced yet. He knows that she still have love for him. He tells that he will never cheat her ever, even if they may have fights. He proposes her for marriage. He tells her that they should give a chance to their marriage.

She doesn’t respond to him. Vanraj and Anupama arrive in the mandap to get married. Anupama is impressed to see her groom. They both compliment each other. Baa wants them to exchange the garlands. The children make it very special. They get Anupama and Vanraj’s pictures in the garland to show the journey of their 25 years of marriage.

Bapu ji tells them that the beautiful moments got captured in the pictures. He wanted to present those moments to them. Anupama happily cries. She feels blessed to get such a family. She tells that she is lucky to get love from her mum and Baa as well. Vanraj and Anupama have fun while exchanging the garlands. Rakhi finds their drama tough to digest.

She tolerates the boring drama. Nandini tells Paritosh that she has sent Anirudh to handle Kavya. She asks him not to worry. Vanraj shows respect for Anupama’s mum. He doesn’t want her to repeat any ritual that makes her touch his feet. He tells that he has become her son now. Anupama is very happy to see him bonding with her family.

Vanraj is terrified to imagine Kavya coming home and asking him to marry him. He wants to get her reply. Anupama asks him why didn’t Kavya come to attend the marriage. She is very happy to experience her life’s big moment again. Vanraj asks her not to cry. He thanks her for bringing so much happiness in his life. Kavya gets strong to handle herself. She tells that she will expose Vanraj’s truth. She wants Vanraj to choose either of Anupama and her. She leaves to meet him. Anirudh fails to stop her. He tries to inform Nandini about Kavya’s rage. He fears that Kavya will be ruining Anupama’s happiness on her special day. How will Vanraj handle Kavya now? Keep reading.

Reviewed Rating for this particular episode Anupama 17th October 2020 Written Update Twists in wedding:4/5
This rating is solely based on the opinion of the writer. You may post your own take on the show in the comment section below.