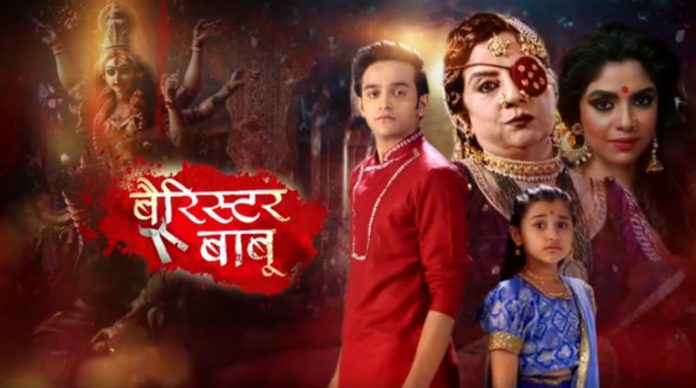 Barrister Babu 16th October 2020 Written Update Truth strikes Bondita Bondita prepares for the Durga puja. She has much belief in the puja. She learns about Tara Bai’s truth in this episode. She finds Haseena captive and locked in a room. Tara Bai had lied to her that she had sent Haseena to her home. Haseena cries and tells Bondita that Tara Bai is a cruel woman, she will never send any girl to home. She asks Bondita to run away if she can, else Tara Bai will ruin her life. Bondita gets a huge shock on knowing this. She wants to get freedom for Haseena as well.

Bondita tells that she has to go to meet Gandhi ji and take him to her village, so that Sumati gets saved from the villagers. On the other hand, Anirudh searches for Bondita. He thinks he has got Bondita’s letter once again by the twist of fate. Anirudh keeps the letter to dry so that he can read it well. He wants to know what did Bondita write to him. He misses her a lot. Bondita has anger on Anirudh that he got engaged to Saudamini.

Sampoorna feels sorry that Saurabh has to tolerate all that because of him. Trilochan insults Saurabh and fires him from the job. Saurabh and Sampoorna get thrown out of the house in Anirudh’s absence. Binoy feels Bondita has ruined Anirudh’s life, he has gone to find her by leaving the family behind. He vents out his anger. Moreover, Bondita doesn’t like the lies told to her by the girls. She can’t understand why Tara Bai has caged her. Haseena tells her that the place is so bad that they can’t imagine. She adds that Bondita will never be taken to Gandhi ji. Bondita gets afraid to know this.

Saudamini reaches Anirudh to bring big twists. She doesn’t want him to find Bondita. She plays an emotional drama to take him back home. Anirudh is surprised to see her. He refuses to return home. He tells her that he has promised Sumati that he will not go to his home until he finds Bondita and takes her home. She insists him to think of his family who is crying for him. Anirudh tells that he will not go until he takes Bondita with him. Saudamini decides to stay back with Anirudh to help him find Bondita.

She wishes he never finds his wife. She tricks him to believe her noble intentions. She doesn’t want to leave him alone. She thinks once they stay together, he will forget Bondita. Bondita gains strength from Anirudh’s speech for freedom. She wants to help the caged girls in the brothel.

She declares a fight to break out Tara Bai’s cage to get freedom. Anirudh rechecks the letter and finds Bondita’s handwriting. He gets sure that she has sent the letter for him. He gets hopeful of finding her. Bondita doesn’t get scared of Tara Bai. She decides to initiate a rebellious battle. She wishes she could have got Anirudh to support her.She remembers all of his teachings. She thinks once she starts acting on his teachings, she will find a way to achieve freedom. She wants to defeat the evil Tara Bai.

Anirudh tells Saudamini that very soon he will be reaching Bondita. Saudamini gets insecure to lose him to a little girl. Saudamini tries to use her charm. She hurts herself to get his attention, but Anirudh doesn’t see her. He just thinks of rescuing Bondita. He tells her that he now knows Bondita is close to him. Anirudh decides to barge into the brothel once again and find Bondita. Will Anirudh be able to find Bondita this time? Keep reading.

Reviewed Rating for this particular episode Barrister Babu 16th October 2020 Written Update Truth strikes Bondita:3/5
This rating is solely based on the opinion of the writer. You may post your own take on the show in the comment section below.