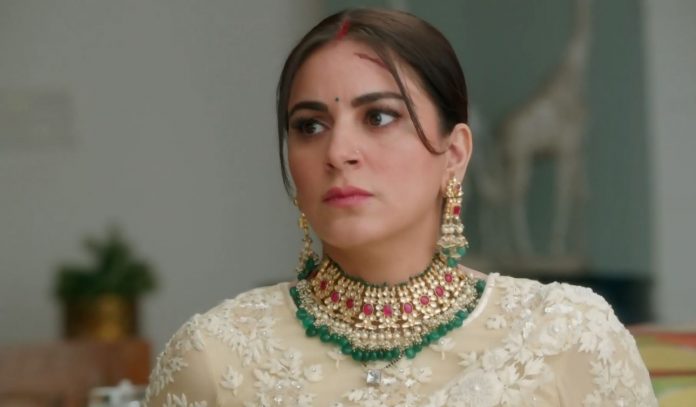 Kundali Bhagya 19th October 2020 Written Update Preeta stunning reply Preeta proves that Mahira got drunk. The guest tells that she knew Mahira isn’t Karan’s wife. She compares Mahira with Preeta. Mahira gets upset on hearing the taunts from Preeta. She creates a scene. Preeta handles the situation well. She tells that they shall forget everything and move on with the party. The lady praises Preeta for having a big heart for sparing Mahira, her Sautan. Janki tells that Sarla has raised Preeta with values.

Shrishti doesn’t want anyone to take an advantage of her good sister. Sarla tells that Preeta doesn’t need Shrishti, she can take care of herself on her own. Rishabh wants to know where was Preeta. Shrishti tells that she didn’t know anything. Sameer announces Karan and Preeta’s dance performance. He wants them to dance. Preeta gets shy. Karan is happy that she is back. Sherlyn and Ramona take Mahira aside and explain her that she is becoming more wrong in front of Luthra family. Sherlyn wants Mahira not to tell anything, else the family won’t trust her.

Ramona asks Mahira to change her dress and get sober. She feels suffocated. She goes to get some fresh air. Sherlyn worries for Mahira. Karan and Preeta come close while dancing romantically. Karan asks Preeta about her praising. Preeta tells that he is honest and handsome too. They look adorable together. Sameer asks Shrishti for dance. Kareena gets angry to see Sameer with Shrishti. Sanjana alerts Kareena about Shrishti’s move to woo Sameer. She asks if Shrishti is also planning to rule over the family. Kareena doesn’t want it happen.

Rakhi takes Bani’s permission to conduct the Mu dikhai rasam again. Rakhi tells Bani that they will ask Preeta about her disappearance. She tells that guests want the Mu dikhai rasam to happen again. She tells that they will plan the function again. Bani agrees to her wish. Kareena overhears them. Kareena asks Bani why did she agree. Bani tells that she really felt Rakhi is right. Karan and Preeta continue to dance and get close. Everyone applauds for them. Sherlyn wants to know if Mahira fainted in the washroom.

She is angered that Preeta made a comeback and defeated her. She doesn’t know what to do. Sanjana hears her saying about Pawan, who kidnapped Preeta. Sarla wants to help Preeta somehow. Sanjana asks Sherlyn to stay away from Mahira. She tells that Pawan is a psycho, just like Mahira. She doesn’t want Sherlyn to fall into trouble. Sherlyn tells that she loves Prithvi a lot, she can never live without him. Sanjana is ashamed of her. She wants Sherlyn to keep her marriage with Rishabh. She tells that Mahira is really mad, she will ruin her life as well. Ramona gets to hear Sanjana’s words against her daughter. She confronts Sanjana. Karan tells Preeta that he missed her a lot.

Reviewed Rating for this particular episode Kundali Bhagya 19th October 2020 Written Update Preeta stunning reply:3/5
This rating is solely based on the opinion of the writer. You may post your own take on the show in the comment section below.