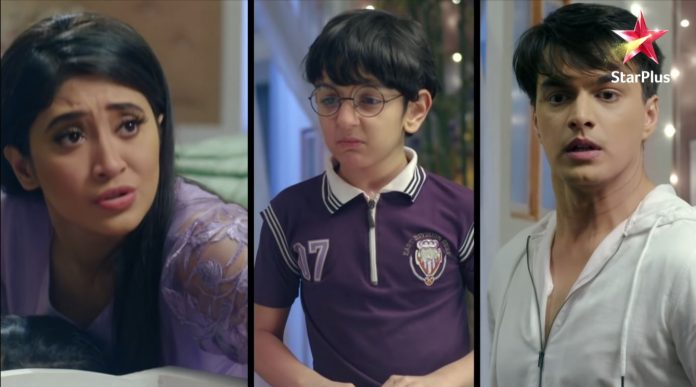 Yeh Rishta Kya Kehlata Hai 19th October 2020 Kairav is insecure Kartik and Naira relive their parenthood. Kartik is much tensed that the baby was awake all the night and kept crying. He thinks she has some problem. Naira tells him that babies usually cry at night and sleep in the morning. She doesn’t want him to talk about doctors all the time. She asks him to talk to Kairav about Krishna’s adoption. Kairav is shell shocked to know that Kartik wants to adopt Krishna. He is against it.

He reaches Naira to tell her that he doesn’t want any sister. Naira tries to console the baby. She fails to hear him out. He gets happy that she has heard him and agreed as well. Naira misses to see anything from him. Kairav informs Vansh that Naira has promised that she will not adopt Krishna. He gets happy. Vansh tells that everything got fine for him. Kairav is happy that his parents are so understanding.

Krishna gets ready for Kirti’s anniversary party and goes with the family. She gets glad to meet Singhanias. Goenkas get a good welcome. They wait for Naksh and Kirti’s return so that they throw a big surprise. Naksh and Kirti’s surprise party arrangements are done. Kartik and Naira have arranged everything so soon. Goenkas likes the arrangements. Bhabhimaa/Kaveri and Devyaani welcome them. The family is mistaken that Kairav is with Kartik and Naira.

Kairav waits for his parents. Kartik and Naira don’t realize that Kairav is at home. They miss to see him. They get to meet the NGO manager, who insists them to sign the adoption process. He tells them that they may lose Krishna to some other family if they take some time to think. Kartik and Naira don’t want to lose Krishna. They decide to sign the papers. They think it will be easy to explain Kairav and family.

Moreover, Kairav happens to see them and overhears their conversation. He cries that they didn’t keep his wish and chose Krishna. He stays upset, while Kartik and Naira are happy to get another daughter. They leave from the house to meet Singhanias. Kairav gets locked inside the house. They fail to hear him shouting. Kairav wonders why didn’t they see him. He feels ignored. He thinks they don’t love him now. He fails to reach them. Kartik and Naira reach Singhania house and get the surprise meant for Naksh and Kirti.

The family realizes that Naksh and Kirti are still to come. Kairav tries to contact the family. Kartik and Naira have a dream of Kairav and Krishna happily bonding. They wish their dream comes true. They want Kairav to accept Krishna as his elder sister. The family gets mistaken that Kairav is playing with kids. They don’t realize that they left Kairav alone at home. Naksh and Kirti arrive home, being ignorant of the family’s presence.

They discuss about their divorce, which gets overheard about the family. The entire family gets a huge shock to know about Naksh and Kirti’s mutual divorce. Krish is the one who is most affected. Krish’s custody becomes a matter of argument. Kairav gets insecure of Krishna further. He is upset that Kartik and Naira love Krishna more than him. Will Naksh and Kirti get divorced or not? Keep reading.

Reviewed Rating for this particular episode Yeh Rishta Kya Kehlata Hai 19th October 2020 Kairav is insecure:5/5
This rating is solely based on the opinion of the writer. You may post your own take on the show in the comment section below.