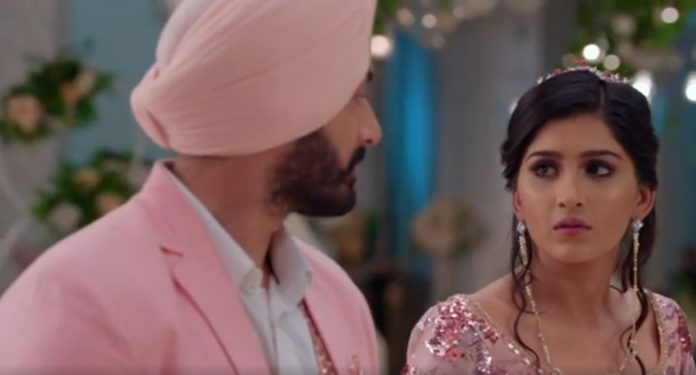 Choti Sardarni 20th October 2020 Written Update Sarabjeet in danger Sarabjeet is much angry when Bittu and Rana admit their crimes themselves. He warns them to admit their crimes in front of the police and get arrested. He threatens that their punishment will get double if they mislead the police. They get worried that they will be going to jail. Sarabjeet is hell bent to get justice for Manav. Param gets stubborn that he wants the gun.

Sarabjeet explains that the gun isn’t a toy gun. Bittu and Rana think of finding a solution since the night is long. Sarabjeet tells Robby that the gun still functions well. Meher takes Param to show some new toys. Robby tells that the gun is still in working condition. He gets upset recalling the way Sarabjeet insulted him. He thinks of taking the gun. Meher meets Jagga and asks the matter. He looks tensed. She gives the toys to Param and sends him away. Jagga requests Meher to forgive Kulwant and not send her to jail.

Kulwant wants to change the game entirely by planning something unexpected. She learns about the gun on hearing Param demanding it. She gets an idea and keeps it a secret. Sarabjeet attends his guests. Manav congratulates him for his first anniversary. He asks for a piece of cake. He gets too drunk. He gets support from Sarabjeet. Manav gets close to tell the truth to Sarabjeet that he is Manav, not Vikram. Surya stops him from revealing anything.

Meher calls Sarabjeet to tell him about Jagga’s warning. Manav gets shattered recalling Meher’s relation with Sarabjeet. He loses his senses. He tells that once Sarab’s name is removed from Meher’s name, then she will be of him. He vents anger and stabs Sarab’s name on the cake. Surya learns that Manav had given his life for Meher. Manav tells that he will not spare Sarabjeet who is coming between Meher and him. He gets to see the gun. An idea strikes him as well. He collapses down. Surya and Seema take care of him. Aditi wants to know what happened to him. Meher also turns worried for him. Manav asks for Meher’s hand.

Aditi asks him to drink water. Manav sinks in depression. Sarabjeet tells Meher that Vikram is worried for some reason. Meher asks Aditi to take Vikram home. Manav has no plans to leave. Robby tells them about the night curfew. He tells that Vikram’s family can’t leave at this time. Sarabjeet asks Kulwant and Vikram’s families to stay back.

He shows his care and respect for Kulwant, but wants her arrest. Kulwant doesn’t think he cares for her. Sarabjeet wants her to take rest at night so that she can surrender to police in the morning. Manav goes mad seeing Sarabjeet and Meher holding hands. He wants to separate them so that he gets Meher back. Sarabjeet falls in big danger, since he gets many enemies in the form of Robby, Jagga, Bittu, Rana, Kulwant and Manav. Manav doesn’t let Meher get away. He calls her by her nickname and makes her nervous. Kulwant doesn’t want Manav to admit the truth in drunken state, which could ruin Meher’s marriage. Manav wants to ask Sarabjeet for his love.

Reviewed Rating for this particular episode Choti Sardarni 20th October 2020 Written Update Sarabjeet in danger:5/5 Too thrilling episode
This rating is solely based on the opinion of the writer. You may post your own take on the show in the comment section below.