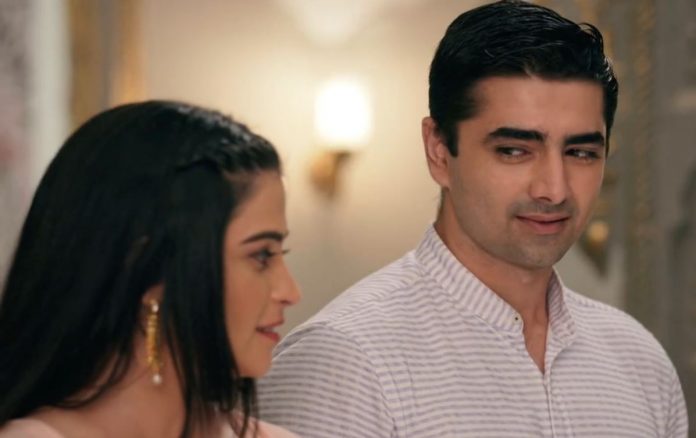 Yeh Rishta Naksh Kirti divorce twists 20th October 2020 Update Kairav is left alone at home and falls in big danger while he tries to seek help from the guard. Kartik and Naira ask Naksh about the divorce talks. Naira tells that she has come to give an anniversary surprise. She asks Naksh if he has planned this prank to shock them. She tells the family that its surely some prank, since Naksh and Kirti are the perfect life partners. She asks Naksh to never joke like that.

Naksh and Kirti reveal that nothing is okay in their marriage, things just got worse after Aditya claimed Krish. Naksh tells that he had been pretending happy with Kirti just for Naira’s sake. He didn’t wish to give tension to Naira in her pregnancy. He tells that it has been tough for him to tolerate the relation. Kirti tells that they had issues since months.

She tells that Naksh doesn’t trust her, since Aditya came back into their lives. The family worries that Naksh doesn’t have faith on his wife. They ask Naksh if he believes that Aditya is Krish’s father. Naksh tells them that Krish is his son, he will never doubt Kirti for the affair, but she had been lying to him a lot and broke his trust. He reveals that Kirti has lied to him about paying the blackmailing Aditya.

He tells that he had always sent money to Kirti, which she paid to Aditya. He tells that marriage breaks when trust ends. The family is shocked to know this. Naira tells Naksh that he shouldn’t believe Aditya. She asks him not to spoil his relationship. Kartik angrily vents anger on Naksh. Naksh breaks his silence. He tells them that Kirti has always been wrong, she has not trusted him and hurt him a lot.

Kartik controls his rage, on knowing Kirti’s mistake. Naksh counts Kirti’s mistakes. He tells that she should have trusted him and shared the matter with him. He fears that he could have lost Krish if Kirti kept the matter hidden. Kirti accepts her mistake. Kartik and Naira ask him to forgive Kirti and keep the marriage. Naksh tells that things got too spoiled and nothing can get fine now. He asks Kirti not to blame him.

He blames Kirti. Krish prepares a lovely song for them. He reaches them to wish on anniversary. Naksh refuses to accept Kirti back in his life. Kartik and Naira ask Naksh not to ruin Krish’s life. They explain that their decision will make them regret later. They ask Kirti to think of Krish. Naksh tells that its not easy for him to forgive Kirti. Dadi defends Kirti and stops her from apologizing to Naksh. She decides to take Kirti and Krish home. She blames Naksh, which makes Devyaani and Bhabhimaa take a stand for Naksh.

Dadi feels Naksh isn’t clean-hearted, he didn’t trust Kirti well, he always had a weak relation with Kirti. She feels Aditya was better than Naksh. She hurts his sentiments further by comparing him with Aditya. Devyaani accuses Kirti, since Kirti has asked for the divorce first. Dadi tells that Kirti won’t be related to Singhanias now. Krish overhears everything. He cries on knowing that his parents are getting divorced. They don’t want Krish to suffer. The family asks Krish whom will he choose between his mum and dad.

Krish wants to be with both his parents. Krish feels horrible while Kirti asks him to come along. Naksh doesn’t want to trouble anyone. He lets Krish leave with Kirti. Kartik and Naira soon learn that Kairav didn’t come to Singhania house, he is still locked at Goenka house. They worriedly rush to home to find him. They reach home and find Kairav in danger. Will they be able to save Kairav? Keep reading.

Reviewed Rating for this particular episode Yeh Rishta Naksh Kirti divorce twists 20th October 2020 Update:3/5
This rating is solely based on the opinion of the writer. You may post your own take on the show in the comment section below.