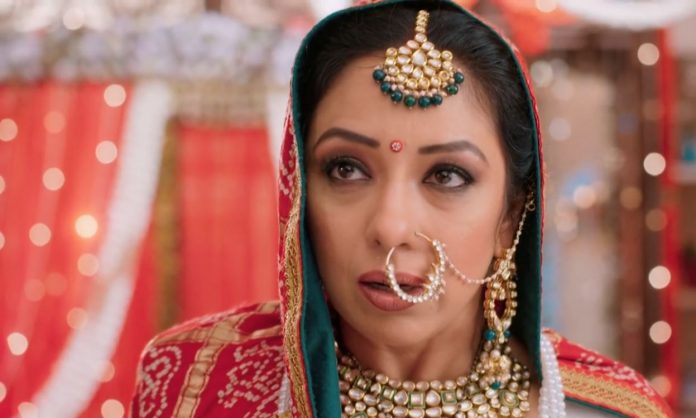 Anupama 21st October 2020 Written Update Disaster strikes Anupama Anupama cries on the bad omen. Bapu ji gets the right meaning from the Gathbandhan breaking. He wants her to learn to live as Anupama, step ahead of Vanraj, since she has given 25 years to the family. He doesn’t want her to lose her identity. He cheers up Anupama. Anupama tells that she will never leave Vanraj’s hand. She holds his hand and enters the house.

Kavya holds his hand, which makes him furious. Vanraj makes an excuse of backache and goes away. Baa takes Anupama for the puja. Anupama asks Devika to take her to room so that she can apply the balm to Vanraj’s back. Devika agrees to help her. Vanraj enters his room. He is shocked to see Kavya with the nuptial chain. He apologizes to her. He wants her to leave before anyone comes. Rakhi gives best wishes to Anupama. She tells that Vanraj should focus more on her than Kavya.

She tells that Kavya is part of his work life. Kavya confronts Vanraj for not coming to the temple. She asks him to acknowledge the pain given to her. She asks why didn’t he come when she planned their marriage. Vanraj tells her that he can’t tell everyone the reason reason for leaving the house. He tells how Sanjay trapped him at home.

She asks him why didn’t he marry her before marrying Anupama. She is much upset with him. She thinks she always wanted him, but he didn’t keep her heart. She feels he didn’t give her any rights, but cheated her. He wants her to leave from his house. She goes mad in anger. She tells Vanraj that he can never keep her hidden from the family. Vanraj is terrified. Paritosh, Nandini and Sanjay are much tensed that Kavya is nowhere.

They look for Kavya. Samar praises Anupama’s smile. He wants her to be happy. Vanraj tells Kavya that he loves her, but he couldn’t come. She asks him to see that she had come as his bride. She wants him to put the nuptial chain. She feels terrible that everyone had laughed on her. She threatens him that she will tell the truth to Anupama. Vanraj exclaims that he was going to come, but couldn’t.

Kavya thinks Anirudh was right about him, since Vanraj will never marry her. She tells that she will become his only wife. She asks him to decide it, if he is of her or Anupama. She asks him to choose either Anupama or her. Anupama gets busy in work. Devika asks her to stay out of kitchen. She tells that she will manage everything. She asks Anupama to just go to Vanraj. Kavya asks Vanraj to tell everyone that he loves her.

He tells her that he will tell the truth to everyone, but they won’t be able to stay together. He asks her to wait for the right time. He tells that even if he divorces Anupama, Anirudh will never divorce Kavya. He asks her not to lose patience and think of their relation. He wants her to know the truth. He asks her to leave the madness. He asks Kavya to trust him, he wanted to just marry her, he loves her a lot. Kavya unlocks the door so that they get seen by someone. She wants their truth to come out so that Vanraj no longer keeps their relation a secret.

Vanraj convinces Kavya. She apologizes to him. Vanraj and Kavya confess love to each other. Anupama feels very lucky to have a husband like Vanraj. She is shell shocked to see Vanraj and Kavya hugging. She gets to her his love confession for Kavya. All her dreams start to shatter with this shocking sight. She faints down seeing them close. Vanraj gets a huge shock to see Anupama unconscious. Vanraj checks Anupama’s condition. Kavya runs out of the house. Rakhi feels happy seeing the high drama in Anupama’s life.

Reviewed Rating for this particular episode Anupama 21st October 2020 Written Update Disaster strikes Anupama:5/5
This rating is solely based on the opinion of the writer. You may post your own take on the show in the comment section below.