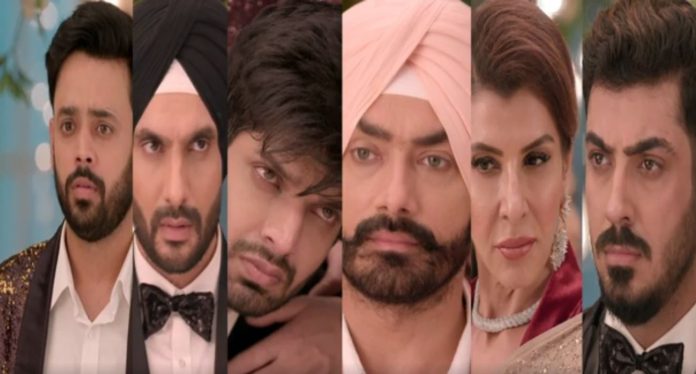 Choti Sardarni 21st October 2020 Written Update Sarabjeet gets shot Meher gets speechless with Manav’s bold way to ask for his love. Manav tells more about his love, his life. He can’t live without Meher. Nobody understands his words. Robby tells that Vikram is too drunk and saying such a thing. Manav asks him if he knows the meaning of love. Robby tells that he had a love marriage with Harleen. Manav makes an indirect confession of his love. Sarabjeet tries to pacify Vikram. Meher feels bad seeing Manav pleading Sarabjeet for his love.

Sarabjeet doesn’t know what Manav means and is about to promise him that he will give his love to him. Meher stops Sarabjeet from making any promise when he isn’t aware of the truth. She doesn’t let him promise Manav. She tells that Vikram is too drunk. Sarabjeet doesn’t understand anything. Kulwant promises to deal with the problem.

Bittu and Rana get ready to commit another crime for the sake of their future. Jagga wants to commit the crime to save his mother. Manav has his own personal motives. Sarabjeet shelters all the evil intentioned people at his house. Meher gets worried with the black out at home. Someone reaches Sarabjeet to kill him with his ancestral gun. It will be a big mystery to find out the real culprit behind the attack on Sarabjeet. Who will be the culprit behind Sarabjeet’s attack? Keep reading.

Manav demands his family to get Meher for him. They don’t get to see Meher when he signs towards her. They wonder why is Vikram behaving so strange and eating Gobi parathas so much. Aditi knows that he can’t be in pain just for the sake of food. She wants to know what’s the matter. Meher tells Kulwant that she is also in pain to see her mum worried. She knows her pain, but calls her wrong. She tells that a crime can’t be forgiven. She tells that she isn’t happy to send her mum to jail.

She can’t forget how Kulwant had tried to kill Manav. She wants to accept Sarabjeet’s decision. Kulwant wants her to do anything. She tells that none can harm her. Meher warns her against doing anything wrong. She tells that the entire family has to pay a price for one’s mistake. Meanwhile, Harleen learns that Robby is going to gamble again. She reminds him Sarabjeet’s warning. She reprimands him and threatens of telling Sarabjeet about his bad deed. Robby gets upset that he always scares him of Sarabjeet.

He is enough of the humiliation. He wants to become the owner of the house. Aditi doubts that someone is in Vikram’s life. She shares her doubt with Seema. Seema asks her not to worry. Meher tells them that Sarabjeet will never let Aditi’s family break. She doesn’t want the relations to spoil. Jagga informs Amrita that he will do anything to save his mother. He turns too angry. Bittu and Rana are scared of their arrest. They take Harleen’s permission to sleep in the room next to Sarabjeet’s room. Harleen agrees to them, unaware of their plan.

Meher is much upset to see her mother going to jail. Meher tells Sarabjeet that Kulwant had undergone many hardships to raise them. She didn’t wish Kulwant made such a mistake. Sarabjeet pacifies her. He tells her that they are rectifying Kulwant’s mistake by getting justice for Manav. He shares his tension regarding Vikram’s strange behavior. He asks her opinion on the matter. Meher doesn’t want to hide the fact that Vikram is Manav.

She wants to tell him the truth once everyone returns home. He tells her that he always wants to see her smiling. At night, the evil people conspirre against Sarabjeet. One of them gets the gun from the wall and reaches Sarabjeet’s room to kill him. It turns out to be Manav, who wants Sarabjeet dead. Manav sees Karan there. Karan makes him change his mind. Manav doesn’t want to commit a crime, on seeing his son, who awakens his conscience. Manav feels connected to his son.

He is mistaken that Karan is Sarabjeet and Meher’s son. Sarabjeet wakes up and sees an intruder in the room. He finds Manav with Karan. He angrily catches hold of him and bashes him up. Meher gets to hear the sound. She finds Sarabjeet attacking someone. She asks him about the intruder.

Manav doesn’t want his face to be seen. He hits Sarabjeet and points the gun at him in defense. Sarabjeet gets about to hit a glass on Manav’s head. Meher stops Sarabjeet from taking such a step. She misleads Manav and catches him. Manav can never hurt her. He continues to fight Sarabjeet. Meher calls the entire family there to save Sarabjeet’s life. Param wakes up and gets scared. Meher protects her sons. A gun shot brings a shock for the family. Sarabjeet gets shot by someone. Will Sarabjeet die?

Rohan gets emotional that Heer will be getting married to Virat. Soham questions Heer over her truth. Harak Singh lectures him. He tells that he has accepted Rohan as his own blood. He respects Rohan. He asks Soham to know his own blood line first. Soham questions Rohan’s relations with them, which breaks down Rohan. Harak takes a stand for Rohan. Shanno and Soham further insult Rohan. Heer supports her brother. She tells them that Soumya didn’t had any blood ties with them, she still kept the family united. She is proud that Rohan has followed Soumya’s teachings always.

She tells Soham that relation of hearts unites them than the blood ties. She tells that she is also not a part of the family if Rohan isn’t a part. She wants him to get equal rights on the family as her. She doesn’t want anyone to hurt Rohan’s heart. She sings his praise, seeing him as a selfless figure as Soumya. Rohan gets emotional. Virat wants to inform his family that Nutan died because of him, he will go to kinners world to repent. He breaks this news to his family. Gurvinder is shocked to know that Heer is a kinner.

Reviewed Rating for this particular episode Choti Sardarni 21st October 2020 Written Update Sarabjeet gets shot:5/5
This rating is solely based on the opinion of the writer. You may post your own take on the show in the comment section below.