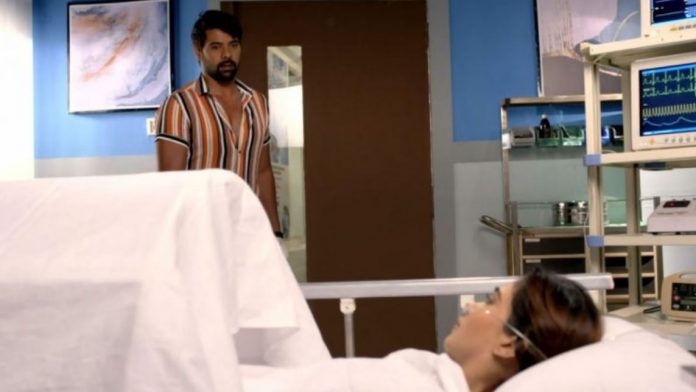 Kumkum Bhagya 22nd October 2020 Written Update Abhi meets Rhea Pragya calls up Prachi to know if Ranbir is her choice. Prachi gets her call, while Shahana asks Prachi not to tell Pragya about Rhea. She asks Prachi to wait until Pragya comes home. Prachi doesn’t tell Pragya about Rhea’s condition. She doesn’t want Pragya to get disturbed on knowing the bad news. Its a happy day for Prachi, and a sad one for Rhea. Pragya asks Prachi if she loves Ranbir.

Prachi tells her that she has always loved Ranbir, she is happy that the marriage is getting fixed. She asks Pragya not to think anything. Pragya is glad to know Prachi’s consent. Pragya promises Prachi. She tells Prachi that Ranbir will surely marry Prachi. She wants to make Ranbir her son-in-law. She looks forward to meet Ranbir and his family. She tells Sarita that her doubt got cleared now. On the other hand, Abhi learns that Rhea got conscious. He wants to see her first. He tells the family that he wants to meet his daughter first.

He goes to see Rhea. He can’t see her in such a bad condition. He cries a lot and feels sorry. He thinks he can’t live without Rhea. He thinks what will he answer Pragya when she learns about Rhea’s suicide attempt.

Rhea also cries on seeing Abhi. She didn’t wish to hurt him. She feels sorry. She tells that she has hurt him a lot. She is upset that she took the step because of Ranbir’s rejection and didn’t think of Abhi. She tells him that she loves Ranbir a lot, but Prachi has snatched Ranbir from her. She gets weak while talking to him. The emotional strain makes her faint down. Abhi rushes to call the doctor.

The family is worried for Rhea. They tell Aaliya that Abhi can’t hear any blames on himself, since he has always loved Rhea. They don’t want Aaliya to speak bad things to Abhi and hurt him, when he is already upset because of Rhea. Aaliya doesn’t understand them. She is angry that Abhi has never loved Rhea. She tells that she has always done everything for Rhea, which Abhi could have done as well, but Abhi just thought for Prachi’s future. She supports Rhea totally.

The doctor informs them about Rhea is conscious now, they can meet her. Aaliya thinks of meeting Rhea. She wants to brainwash her against Prachi. She meets Rhea to tell her that she has made a plan against Prachi, which will make Ranbir hate her. She tells her that Abhi and Ranbir will not love Prachi again, they will just love Rhea. Rhea wants to know what did she do.

On the other hand, Pallavi angrily slaps Ranbir on hearing his love for Prachi. Vikram calms down Pallavi. He knows she is in much stress, since they have given a promise to Abhi about the alliance between Ranbir and Rhea. He asks Ranbir to stop arguing with Pallavi. Pallavi tells Ranbir that Rhea has committed suicide because of Prachi and this time even Abhi won’t forgive Prachi. She asks him to forget Prachi. Ranbir still defends Prachi who isn’t at any fault.

Pallavi blames Prachi for breaking her family and snatching her loving son. Vikram asks Ranbir not to anger Pallavi more. Pallavi drags Ranbir to the ICU and makes him see Rhea’s condition. Ranbir gets emotional to see Rhea in a bad state. He gets too upset and feels guilty. He wishes that he didn’t hurt her heart by scolding her too much.

Reviewed Rating for this particular episode Kumkum Bhagya 22nd October 2020 Written Update Abhi meets Rhea:2/5
This rating is solely based on the opinion of the writer. You may post your own take on the show in the comment section below.