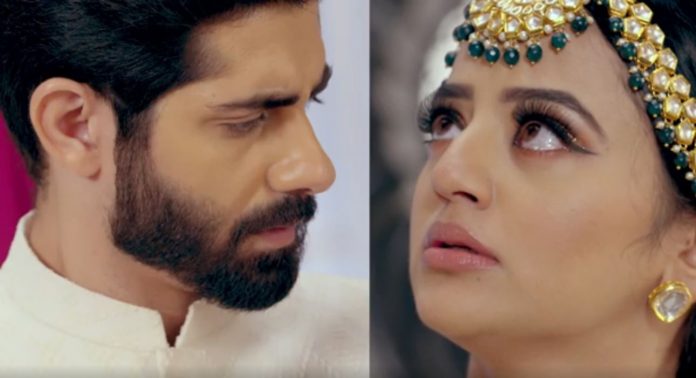 Ishq Mein Marjawan 21st October 2020 Pinjara Upcoming Riddhima is much relieved and happy that Vansh came in the nick of time and saved her. She finds Vansh holding the lamp in right hand and supporting her by his left hand. Ishani makes her realize that Vansh can work with both his hands with much precision. Riddhima gets a sudden realization that Vansh is ambidextrous. She is shocked to know that he can do any normal work with his left hand too.

This makes her realize that he maybe Ragini’s killer. Vansh has saved her from the terrible fall, but he falls in her eyes. She gets a doubt on him, but still doesn’t let it break her trust. She explains her heart that she has to trust Vansh in order to make their marriage work. She finds Vansh’s goodness. She wants to believe that he is a good person.

Riddhima falls for Vansh even more thinking of his concern. Riddhima gets thinking to confess love to Vansh. She is much shocked when she gets a picture of Vansh pointing a gun at Ragini. She feels cheated by Vansh. She gets heartbroken that her love has cheated her. Fate plays a bad game with Riddhima. How will she deal with this heartbreak? Keep reading.

Reviewed Rating for this particular episode Ishq Mein Marjawan 21st October 2020 Upcoming:3/5
This rating is solely based on the opinion of the writer. You may post your own take on the show in the comment section below.

Pinjara Upcoming:
Omkar asks Mayura for Agnipariksha to test her character. He wants her to prove her loyalty towards him. Mayura tells Omkar that he worships Durga as a Devi and on the other side, he insults Durga’s avatar. She asks him how can he ask her for Agnipariksha. She tells Omkar that she has loved him, but he has stained her character. She feels he has stained the pure relation of marriage. She accuses him in anger. A huge rift forms in their relationship.

Rohan has started a garment business. He tells Kaku that he didn’t find tailors yet. Kaku tells him that its first day of Navratri. She wants him to pray for his business. She decks up a temple. She calls Rohan and Cheenu to pray. Cheenu is surprised and praises Kaku for the lovely decorations. She tells Rohan about the folk dance. Rohan tells that he knows about Garba dance.

Kaku asks Rohan didn’t he tell Cheenu about their culture. She tells the story behind the folk dance. She shows the diya, which is called Garbi. She tells that Garbi word came from the word womb. She tells that the pot is like Durga Maa’s womb and the diya is the lives of all the human kind. She tells that Devi Maa protects the human life in her womb. Cheenu likes the story and praises Kaku once again. Kaku prays that the happiness always stays in their lives.

Mukund compels Renuka to speak to Navya about a child. He threatens to send Renuka to her Maayka if his sister doesn’t come home. Navya finds Adi much worried. She asks him about paying the money to Alok. She tells that seven lakhs payment will leave their account empty. Adi doesn’t answer her anything.