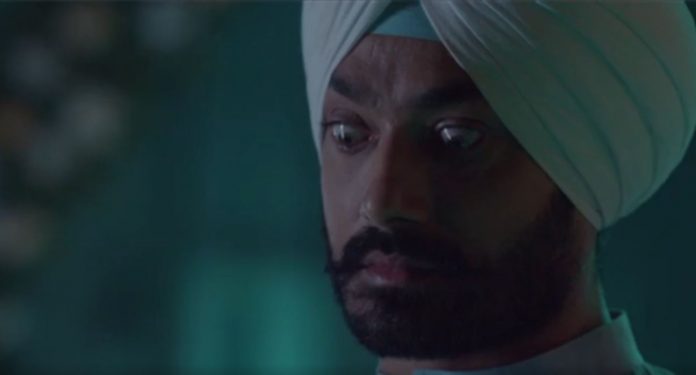 Choti Sardarni 22nd October 2020 Written Update Mystery killer shoots Sarab A major shock for Meher is coming. She finds Sarabjeet in danger. She doesn’t know that the attacker is Manav. Manav has turned so mad for Meher, that he didn’t realize that he is harming a noble person, Sarabjeet. Sarabjeet was ready to return Manav his love, unaware that the latter is asking for Meher.

Sarabjeet would have sacrificed his love as well if he knew that Vikram is Manav. Sarabjeet and Manav get into an intense fight. Manav drops the idea of killing Sarabjeet, after seeing Karan. He doesn’t feel to turn Param and Karan upset by killing their dad. Manav fights Sarabjeet in defense, when he fears of getting caught and exposed in front of Meher. He doesn’t want Sarabjeet and Meher to know that he is the attacker.

He knows it will be hard to explain Meher that he had come with an evil intention, but later changed his mind. Meher prays for Sarabjeet, seeing him strongly fighting the enemy. She isn’t aware of the enemies at home. Kulwant and her three sons are also after Sarabjeet’s life. Meher calls Harleen and Aditi for help. Harleen and Aditi realize that their husbands aren’t in the rooms. They wonders where did they go.

Robby comes there to see after hearing the gun shot. The family is terrified to hear the gun shot. Sarabjeet mysteriously gets shot by someone, while Manav is far away from him. Someone takes an advantage of Manav pointing the gun at Sarabjeet. The anonymous culprit gets away after committing the crime, while Manav gets accused. Sarabjeet gets shot on his chest, which brings the huge shock for Meher. The family reaches there one by one, only to find Sarabjeet lying in a pool of blood.

Meher is speechless to see the masked man Manav shooting Sarabjeet. She asks them to catch the masked man. Manav fears the happening to snatch Meher from him forever. Did Manav really make the mistake to shoot Sarab? Will Manav rush away to save himself from getting exposed? Or will Manav show up his face and try to save Sarabjeet from the danger? Keep reading to know more about the forthcoming episode.

Sarabjeet and Manav have a fight. Meher calls for the security. She runs to help Sarabjeet. She falls down and gets hurt. Kulwant asks who shot the gun. Bittu tells that the sound came from upstairs. Harleen wants to find out what’s happening. Aditi goes with her to check the fuse. Kulwant asks Jagga from where is he coming. Jagga tells that he also went to see after hearing the gunshot. Kulwant asks them to spread and find out the thief. Aditi collides with Seema. She asks Seema to find Vikram.

Seema rushes away when Adiit tells about some thieves entering the house. Harleen and Aditi check the fuse. Sarabjeet doesn’t let Manav run away. Their fight continues. Manav gets beaten up. Kulwant and her sons try to reach Sarabjeet. Meher too rushes to save Sarabjeet. Sarabjeet tries to remove Manav’s mask and see his face. Manav pushes him away to save his identity from getting exposed. Meher reaches them in a hurt state. Sarabjeet worries for her, while Manav gets away.

Sarabjeet is shocked to see the gun pointed at him. Soon, he gets shot in front of Meher. Meher is shattered seeing her husband shot, while Manav too is stunned. It seems that Kulwant and her sons are away from Sarabjeet. Even Robby isn’t present at the gunshot site. Sarabjeet and Meher have tears in their eyes, thinking its the last moment of their togetherness. Their pain flows out. Sarabjeet falls down, much to Meher’s shock. Meher breaks down at such a sight. Harleen and Aditi restore the power and hear Meher’s scream.

They rush to see. The entire family reaches Sarabjeet to help him. They want to know the killer. Harleen and Aditi cry for their brother. Sarabjeet just sees Meher. Manav stands shocked. He gets blamed for the murder. Aditi catches the masked man and scolds him for killing her brother. She unmasks him and is shocked to see Vikram. The family gets to see Vikram as the masked man. They didn’t know that Vikram can ever shoot Sarabjeet. Aditi asks Vikram why did he shoot Sarabjeet. Manav gets blamed, while the culprit is someone else.

Aditi asks Vikram why did he attempt the murder. She asks the reason for his enmity. Manav is in shock seeing Sarabjeet’s state. Meher knows Vikram is Manav, he has a motive as well. The family tries to call for help. Kulwant hides from them. She is the one who shot Sarabjeet. Harleen doesn’t want to spare Vikram. She faints down in shock. Meher asks the guards to take Sarabjeet to the hospital. Jagga tells that ambulance can’t come in the night curfew. Manav tells them that he didn’t shoot Sarabjeet. Kulwant and Jagga sign each other, which proves that either of them had shot Sarabjeet. Seema can’t accept that her son can kill someone. Sarabjeet asks Meher to look after the family. He tells that their journey has come to an end. Meher cries for him.

Manav gets into the car and drives away to take Sarabjeet to the hospital. Meher suspects Manav’s intentions and follows him. The family also follows Meher and Manav. Manav hears Sarabjeet taking Meher’s name in semi-conscious state. Aditi tells Robby that Sarabjeet has less time. She asks him to drive fast. Seema doesn’t want her son to get blamed. She asks Surya to help Vikram. She calls Vikram. Surya asks her to take medicines. Manav gets stopped at the check post. He uses his CBI post to get rid of the police check.

He rushes away with Sarabjeet. Meher and the family get blocked. Aditi takes the help of DGP to cross the check post. Meher thinks to kill Manav if anything happens to Sarabjeet. She learns that Manav has admitted Sarabjeet at the hospital. Meher informs the same to Aditi. The family rushes to the hospital to see Sarabjeet. Manav saves Sarabjeet’s life by taking him to the hospital in time. The doctor tells that Sarabjeet is critical, his survival chance is less. Aditi scolds him. She wants to treat her brother and save his life. She asks Meher to stay out and trust her. Meher prays for Sarabjeet’s life. Manav meets her. She is angered to see him. She blames him for shooting Sarabjeet. He can’t see her suspecting him for such a crime.

Reviewed Rating for this particular episode Choti Sardarni 22nd October 2020 Written Update Mystery killer shoots Sarab:5/5
This rating is solely based on the opinion of the writer. You may post your own take on the show in the comment section below.