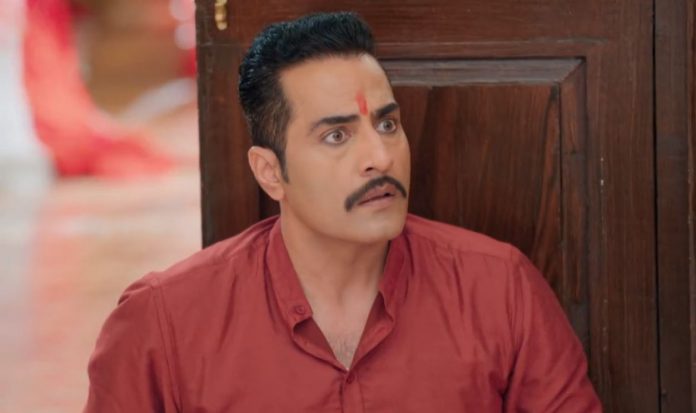 Anupama 23rd October 2020 Written Update Vanraj in shock Vanraj gets worried, imagining Anupama all around him and questioning him on the deceive. Nandini finds Samar crying. He tells her that he can’t see his mum unconscious. He doesn’t want to see her hurt. He wants to glorify her. He tells Nandini that his mum never stops working, she works round the clock, all the troubles are in her fate. Nandini pacifies him.

She tells him that Anupama would be fine now. She doesn’t want him to hurt Anupama by acting weak. She asks him to make prayers and wait for miracles. She doubts that Kavya is behind the matter. Paritosh asks Vanraj to have milk and not take stress. He wants Vanraj to share the matter if there is anything to say. Vanraj had lied to him before. He asks Vanraj what had happened that Anupama fainted.

Vanraj doesn’t think anyone will believe him. Paritosh tells that he will believe him. Vanraj tells him that Kavya was already in the room, she was so angry that she wanted to ruin him, he tried to convince her a lot, but he failed. He tells that Anupama had seen Kavya and him in a compromising position, but it was just a misunderstanding. He tells that Anupama fainted on seeing them together, but the truth was something else.

He fools Paritosh by putting all the blame on Kavya. Kavya wants to know about Anupama. She asks Nandini about Anupama’s condition. Kavya demands an answer about Anupama’s unconscious state. Kavya worries further. Paritosh trusts Vanraj. He doesn’t want to scold Kavya. He tells that Kavya should be away from him now. He knows Anupama has misunderstood Vanraj. He asks Vanraj to explain the situation to Anupama. He tells that Anupama trusts him like God. He wants him to tell the truth to Anupama. Vanraj is glad to hear this. He hopes that he wins back her trust. Vanraj worries that Anupama has told everything to Devika.

Kavya worries that Vanraj may be questioned by the family. She calls him to ask, but he doesn’t answer. She hopes everything is okay at his place. Vanraj goes to meet Anupama. He doesn’t want her to tell anything to Devika. Devika understands everything on seeing Kavya’s earring. She wants an answer from him. Anupama gets conscious. Her violent reaction gets unexpected. She pushes away Vanraj in a way that it leaves Vanraj and Devika shocked. Vanraj and Kavya’s affair gets known to Anupama now. She feels cheated by him. She can’t believe that he broke her trust of 25 years.

She always trusted him when Devika and Anirudh tried to alert her about Vanraj’s cheat. She never thought that he will cheat her this way in return of her true love and dedication. She feels disgusting to see Vanraj.

She doesn’t want him to touch her. She wants to run out of the room. Devika stops her. Anupama goes mad in anger on seeing Vanraj, which reminds her of his deceive. She runs crazily, pushing Devika away. Vanraj gets scared seeing her reaction. Devika alerts the family to come and stop Anupama, who goes uncontrollable. The family is shocked to see Anupama’s immense pain. They just saw her smiling until she went to Vanraj. They want to know what had happened that she has shattered so badly.

Vanraj stands shocked to see Anupama so broken. Samar wants to know the matter. Sanjay understands that Vanraj has shattered her trust. The way she reacts and avoids the sight of Vanraj proves it all to Sanjay. Vanraj falls in Anupama’s eyes. Paritosh and Devika also understand that Anupama is badly hurt and heartbroken. Anupama doesn’t want to go to her room. She goes so hyper that everyone panics seeing her. Her condition makes everyone teary eyed. Pakhi requests Anupama to come with her to her room.

Anupama hugs Samar to block the sight of Samar. Baa and Bapu ji get worried. They want an answer from Vanraj. Anupama’s mother and brother get terrified to see her unexpected condition. They didn’t know her life’s best day will turn out to be so horrible. Pakhi finally puts Anupama to rest by singing a lullaby for her. The children take care of Anupama and shed tears. They want Anupama to break her silence and share her pain. Devika confronts Vanraj and Kavya. Devika threatens to send them to jail. Anupama decides to end her marriage with Vanraj.

Reviewed Rating for this particular episode Anupama 23rd October 2020 Written Update Vanraj in shock:4/5
This rating is solely based on the opinion of the writer. You may post your own take on the show in the comment section below.