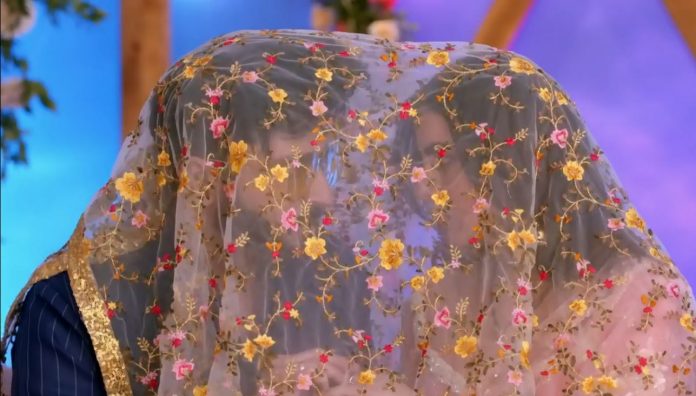 Kundali Bhagya 29th October 2020 Written Update Preeta Karan’s Mu Dikhai Nimmi likes Preeta’s values. She tells Rakhi that she has really liked Karan’s choice Preeta. She tells that the marriage has happened with the right life partner, even if the marriage happened in a wrong way. She tells that its called Kundali Bhagya that fate united them. Karan is pleased to hear good things from her. Rakhi also agrees that Preeta is a nice girl. Sarla gets unwell. Shrishti and Janki take care of her. She doesn’t want them to worry.

Sameer overhears Preeta and Shrishti’s conversation. Shrishti tells that she wants to come, but she can’t come. She apologizes to Preeta. Sameer encourages Preeta. She gets upset that none is coming from her family. She wishes Shrishti could come. He tells that he will update her family on a video call. She thanks him. Meanwhile, Sherlyn informs Sanjana about Preeta’s warning. She tells that Rakhi is feeling guilty, she had made Mahira leave the house.

Sanjana can’t believe the happenings. Sherlyn gets irritated. Sanjana tells that Mahira had to get punished some day. She doesn’t want Luthras to know about Sherlyn’s mistakes. Sherlyn isn’t scared of anything. Sherlyn tells her that Preeta hates Mahira, Sarla has helped Preeta in her plans, knowing Mahira will be a problem for Preeta. She asks Sanjana to help her, knowing Preeta is a problem for her. She asks her to plan any emotional drama to help her.

She reveals that Preeta has insulted her, she can’t talk to her badly, she is getting confident because of support. Sanjana wants her to stop it. She assures that she will support her daughter. Sherlyn wants to know what will she do. Sanjana tells that she will foil Preeta’s Mu dikhai so that the guests dislike her. She reveals her plans to Sherlyn. She tells that she will have courage to work out her plan. Sherlyn gets glad to know her plans.

The Luthras welcome the guests. Nimmi asks Rakhi if Kareena is still the same. Rakhi praises Kareena. Kareena waits for Preeta. Bani asks Kareena to forget their family fights. Kareena and Nimmi get into an argument over the past. Rishabh smiles watching them sweet bonding, as they are pretending it all. Karan meets his brothers Rishabh and Sameer. He wants Rishabh to care for him. Rishabh tells that he can’t disturb Karan now, since he is married to Preeta. Preeta comes for the function. Bani wants Kareena to come for the ritual.

Rakhi tells them that its Preeta’s Mu dikhai, she wants the eldest member Bani to do the ritual. Rano suggests that Karan can do the ritual and they can see Preeta’s face at once. Rakhi and Bani ask Karan to lift the veil and show Preeta’s face to them. Rakhi explains him the rituals. Nimmi asks Karan to gift something to his wife at the time of Mu dikhai. Karan tells that he has already given his house to Preeta. Rakhi gets a gift on his behalf. Karan lifts Preeta’s veil and gets under it, shocking the onlookers. They have a cute moment.

He tells that he wanted to talk to her. He feels she talks so sweetly that everyone likes her. He admits that he also cares for her. She gets glad to hear this. He tells her that she shouldn’t get emotional, he doesn’t like her, since she is troubling him a lot. He doesn’t want everyone to treat her like a VIP. He wants to have things his way. She asks him to get out of the veil since everyone is watching them. She asks him not to blame her for his mistakes.

She defends that she isn’t at fault. The guests laugh at them. He tells that Rakhi got the ring for her. Nimmi tells that Karan and Preeta are romancing in front of everyone. Rano tells that they don’t care for the open romance. Kareena gets embarrassed and blames Preeta. Bani tells that Karan has gone inside the veil on his own. Rishabh thinks Karan is at fault to embarrass the elders. Karan makes Preeta wear the ring. She gets happy.

Reviewed Rating for this particular episode Kundali Bhagya 29th October 2020 Written Update Preeta Karan’s Mu Dikhai:5/5
This rating is solely based on the opinion of the writer. You may post your own take on the show in the comment section below.