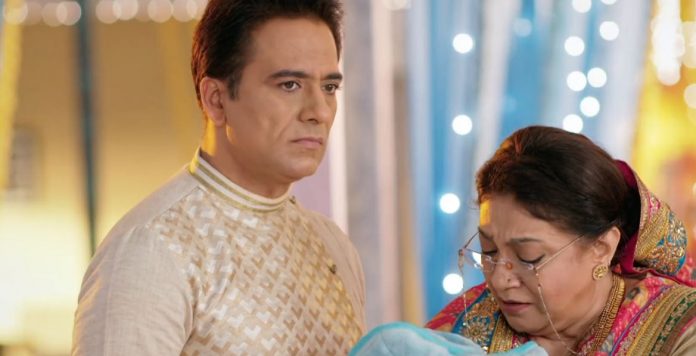 Yeh Rishta 30th October 2020 Written Update Akshara falls in danger Manish announces the characters of the kids in the Ram Leela. Everyone is excited to see the skit. The kids perform well. Kairav has stage fear, unlike Krishna. She is confident in the act, but her hair get loose after the pins fall. She gets uncomfortable after the hair disaster. Kartik asks Naira why didn’t she fix the pins well. Naira tells that she doesn’t know how it happened. She asks the kids to focus on the play.

The family enjoys the skit which turns funny with some bloopers. Kairav refuses to go on the stage. He thinks he will also lose his prop or fall on the stage. He gets adamant. Kartik and Naira ask him not to worry for the result and just enjoy the skit. Kairav goes on the stage after they explain him. He gets freezed and forgets his dialogues for a while. The family waits for him to say something. Kairav gets into Raavan act. The family laughs on hearing his Raavan laugh.

Kairav acts the kidnapping scene of Sita. Krishna acts as Sita. Kairav and Krishna enact the fight. Kairav forgets the lines once again. Krishna wants him to say the lines. Kairav falls down on the stage. He feels everyone is making fun of him. The family can’t stop laughing seeing the skit. The story progresses in the same way. The skit ends with Ram and Raavan’s fight. Kairav makes many mistakes. He has all attention on Krishna.

He wants Krishna to get away form their lives. Kartik and Naira don’t realize Kairav’s problem. The skit gets praised by the guests and family. Kairav goes to stop Krishna. The family blesses the kids for their amazing performances. They give full ratings to the play. Naksh and Kirti take care of Krish. They get praised for Krish’s inclination towards his culture. Naksh gives the credit to Kirti for Krish’s good upbringing. They have a moment. Kairav complains to Kartik and Naira about Krishna. They don’t think Krishna will hurt the baby. Dadi asks Kairav to not worry.

She listens to him. She asks Krishna not to pick the baby. Kairav tells Krish and Vansh that he doesn’t like to see Krishna with his sister. He gets an evil idea on his mind. He takes the baby with him and hides her in a carton. He wants Krishna to get questioned and blamed. Akshara falls in big problem when the carton gets loaded in the truck. The baby is taken away from the house.

Reviewed Rating for this particular episode Yeh Rishta 30th October 2020 Written Update Akshara falls in danger:3/5
This rating is solely based on the opinion of the writer. You may post your own take on the show in the comment section below.