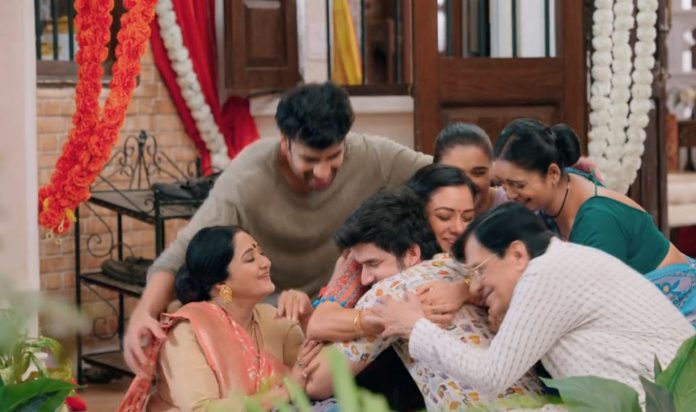 Anupama 31st October 2020 Written Update Anupama warns Vanraj Anupama’s self esteem is much hurt. Vanraj’s male ego is hurt. He doesn’t care for Anupama, but cares for his own ego. He is hurt after Samar thrashed him verbally. He can’t tolerate that his son has lectured him and ended ties with him. Samar encourages his mum. Anupama tells him that if she moves on, then much will be left behind. He asks her what will she do now, if she will forgive Vanraj.

She tells that she will never forgive Vanraj for the big cheat. She doesn’t want to punish the family for Vanraj’s cheat. She tells him that she can’t punish the elders by revealing the ugly truth of Vanraj’s affair. She asks Samar to imagine how the family will break down. He asks her to think of herself. She tells that she doesn’t want to think of herself, but her family. She adds that Vanraj will himself tell his truth to his family.

She just wants the elders to be happy and healthy. She wants Kinjal and Paritosh’s marriage to go well. She blesses all her children. He tells her that he will always be with her in every decision. He asks her how did she feel when she learnt that Paritosh has hidden the truth from her. She tells that even Nandini and Sanjay had hid the truth for a reason that she doesn’t get hurt. She still feels bad.

Samar is shocked to know that Nandini already knew this and hid it from him. He goes to confront Nandini. He hurts Nandini and vents anger on her. He confronts her for hiding about his mum’s life. She tells him that she didn’t tell him anything as he is close to his mother. He doesn’t want any explanation. He gets angered at her and tells that he hates her, he isn’t happy to see her. He doesn’t listen to her.

He asks her to never meet him or his family now. She gets upset. Devika tells Anupama that she has some important work. Baa asks her to finish her work well and come after few days. Devika tells that she likes to come to meet them. Samar asks her to take Anupama along. Devika likes the idea and asks Anupama to accompany. Baa tells that Vanraj would be coming home, he would be upset if he doesn’t see Anupama. Vanraj arrives home. Anupama doesn’t get water for him like always. Baa asks Anupama to ask Vanraj if she can go out.

Anupama doesn’t listen. She wants to go with Devika. Vanraj sees Anupama’s reaction. Anupama tells that she will make food for the family and then go. Vanraj wants Devika to stop coming to his house. She tells that the house belongs to his dad, she isn’t scared of him. He insults her for being a divorcee. He blames Devika for ruining Anupama’s life and breaking her family. Devika isn’t hurt by his words.

Devika tells that Kavya is also like her, she is also getting divorced, Kavya already has an affair. She asks him to compare her with Kavya. She wants him to look at his mistakes first. Devika and Anupama get ready to go out. Vanraj stops Anupama and reminds her house duties. She tells him that she is going against him, she knows her duties and he doesn’t need to teach her anything. She scolds him back and leaves.

Vanraj is left frustrated. Meanwhile, Rakhi tries to know from Kinjal about Vanraj and Kavya’s affair. Kinjal is much stressed. Rakhi asks her not to hide anything. Kinjal doesn’t want Rakhi to interfere in other’s matter. Rakhi understands that her doubt was right. Kinjal’s angry reaction proves it all to her. Anupama and Devika enjoy their outing. Anupama wants to go home, since her family needs her. Devika asks her to enjoy her own time. Vanraj waits for Anupama. Anupama returns home. Vanraj tries to belittle her.

She asks her to stay with Devika. He ousts Anupama from the house. Anupama asks him to open the door, else he will be exposed. He gets worried seeing the elders. He opens the door for Anupama. Anupama hands over the fallen name plate to him. Nandini apologizes to Anupama. She tells that she had tried hard and stopped Vanraj and Kavya’s marriage. Anupama learns that Kavya wanted to marry Vanraj. She goes to confront Kavya.

Reviewed Rating for this particular episode Anupama 31st October 2020 Written Update Anupama warns Vanraj:5/5
This rating is solely based on the opinion of the writer. You may post your own take on the show in the comment section below.