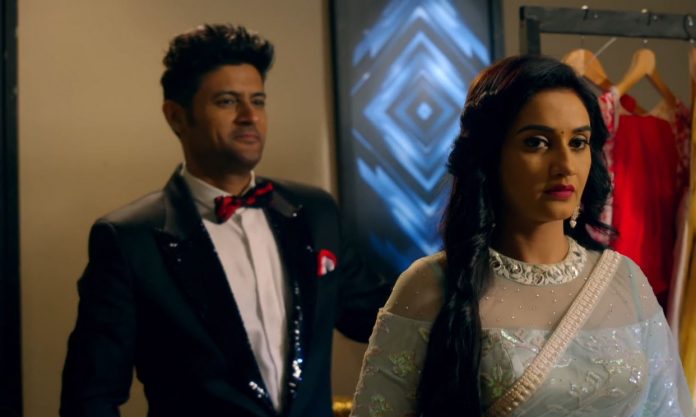 Shaadi Mubarak 31st October 2020 Written Update KT stands for Preeti Chanda and Rati plan to ruin Preeti’s career. They want Preeti to lose KT’s trust also. KT learns Rati’s plans. He rushes to stop Preeti from consuming the alcohol. He sees Preeti drinking the mocktail. He finds her getting shaken and thinks its cocktail. Tia stops KT from going to Preeti. He gets stuck on the dance floor. He wants to stop Preeti, but fails because of Tia. He takes Preeti aside and tries to end her hangover by offering the lemon juice.

Preeti tells that she just has a normal headache due to the noise. She asks him not to worry, she didn’t take any hard drinks. He tells her that Chanda had spiked her drink, he had heard Rati saying that. He adds that its Chanda’s conspiracy to ruin their company’s image. He tells that Chanda and Rati want to insult her.

Aryan is much upset with Preeti. Preeti defends herself. Aryan tells Preeti that her dad will surely be upset with him. He tells that they won’t be able to manage the marriage. He refuses to give them the wedding contract. He blasts anger on KT and Preeti. Aryan’s dad surprisingly clears Preeti’s name. He tells Aryan that he had broke his fast for the sake of his son’s happiness. Preeti finds it strange that Aryan’s dad changes his words.

KT tells that Aryan’s dad is saying the truth, he left his fast for the sake of his son. Aryan feels sorry to blame KT and Preeti. He tells KT that he will be giving the wedding contract to Shaadi Mubarak. KT and Preeti are overwhelmed. KT is glad that they have won. Chanda’s plans have failed. She wants to leave from the party. KT corners Chanda and Rati. He scolds them for their cheap tactics to steal their ideas and target Preeti.

He calls Chanda insecure of Preeti’s talent. Chanda insults Preeti further. She doesn’t think Preeti holds anything that can draw her insecure. Chanda tells him that she pities Preeti who has no respect in her own family. KT asks Chanda to just have a healthy competition with them. Preeti answers Chanda’s taunts well. She finds Chanda having zero values. She praises her own values. She tells that she lives with her daughter by her own choice.

She has her own fight with herself to earn a self esteem. She wants to take a stand for herself. KT is impressed with Preeti’s speech. KT orders Chanda and Rati to apologize to Preeti. He threatens of calling the police. Chanda refuses to bend down. Rati asks Chanda to apologize without thinking of her self respect, else they will be losing their name. Rati doesn’t want the matter to get known to everyone. Chanda apologizes to Preeti unwillingly.

KT makes Chanda and Rati make a proper apology. He takes a stand for Preeti. Preeti is much pleased to see KT supporting her. Tarun and Rati target Priyanka. They try to break Priyanka’s engagement with Amit. They defame Priyanka by staining her character. They embarrass Kusum as well. Kusum gets helpless to apologize to Amit and his family. Preeti defends Kusum and Priyanka. She slaps Tarun. She is ashamed of his immoral act to ruin a girl’s life. Will Tarun learn from his mistakes? Keep reading.

Reviewed Rating for this particular episode Shaadi Mubarak 31st October 2020 Written Update KT stands for Preeti:5/5
This rating is solely based on the opinion of the writer. You may post your own take on the show in the comment section below.