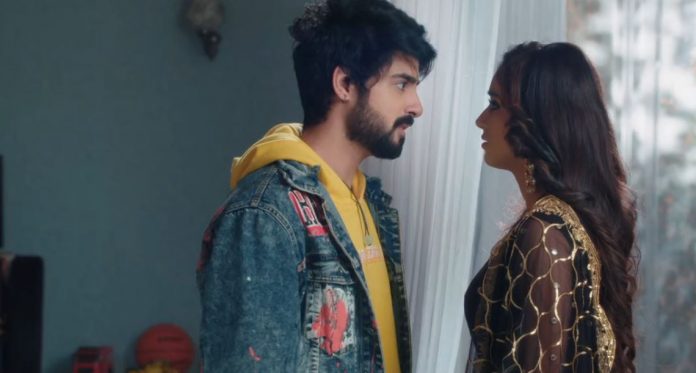 Yeh Hai Chahatein 31st October 2020 Written Update Rudra accuses Prisha Rudra insults Prisha by staining her character. Prisha doesn’t want to tolerate anything rubbish against her character. She warns him against maligning her image. She feels sorry that he has such image of her in his eyes. She tells that she didn’t go to meet Yuvraj. She blames him for his bad thinking. She tells that society’s thinking is filthy for a woman.

Balraj asks Inspector to search the house if he wants. Inspector shows the picture of the earring. Mishka tells that the earring doesn’t belong to her. She is glad to get saved. Its actually Sharda’s earring. Inspector asks Sharda to come with the police for interrogation. Rudra and Balraj stop the police from taking Sharda. They defend Sharda. They tell that such earring can be bought by anyone in the city. Sharda shows the other earring.

Prisha is worried for Sharda. Saransh takes Prisha to Rudra. Rudra joins the online class and drinks. Prisha stops Rudra from drinking in front of the entire class. Rudra asks her to stop dominating him. She tells that Saransh has seen him, he will learn bad things from him. She asks him to think of Saransh. Prisha gets the principal’s call. She asks Rudra to answer the call and tell that he doesn’t care for Saransh.

Rudra gets suspended from the school authorities. Prisha tries to defend Rudra. She gets to hear a lot from the principal. She pleads and gets a final chance for Rudra. Principal suspends him for two weeks. Rudra blames Prisha for having an affair with Yuvraj. He tells that she is the reason for his sorrow. She clears that she had gone to meet Neerja and Rahul. She wants Yuvraj to tell him the truth.

Yuvraj doesn’t answer her calls. Rudra blames her for planning everything. He calls her a bad character girl. Prisha can’t tolerate it more. She takes him to the hospital to show Neerja. Yuvraj meets Prisha again to defame her. He wants to separate Rudra and Prisha. Prisha expects Rahul to tell the truth to Rudra and clear his misunderstanding.

Reviewed Rating for this particular episode Yeh Hai Chahatein 31st October 2020 Written Update Rudra accuses Prisha:5/5
This rating is solely based on the opinion of the writer. You may post your own take on the show in the comment section below.