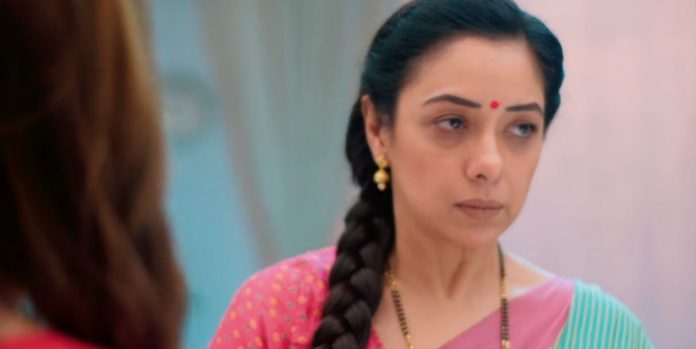 Anupama learns about Samar’s dance classes. She is very happy that his dream is getting fulfilled. She blesses him to be much successful. She asks him to move on. He asks her to take a step and teach classical dance to the kids in his dance classes. She tells that she doesn’t know anything. She asks him to ask Nandini. He gets upset. She tells him that he shouldn’t be upset with Nandini, she is a good person, who supported them instead Kavya.

She knows that not everyone can tell the truth to the dear ones. She tells that Nandini didn’t wish to hurt her with the truth, because she cares for him. Samar understands it. Anupama dances to cheer him up. She tells that she gets happiness when she dances. She wants to go and prepare a tiffin for Vanraj. Paritosh and Vanraj are in the park. Vanraj is in stress over Kavya’s matter. Paritosh asks him not to worry about Anupama and give her some time.

Vanraj wants him to support. Paritosh tells that everything will get fine soon. Anupama finds Baa making the food. Baa tells that Vanraj asked her to prepare the food for him. Anupama calls Jhilmil to find out why she didn’t come for work. Jhilmil tells that Vanraj called her and asked her not to come, since the family planned an outing for few days. Anupama realizes that Vanraj lied for a purpose.

Vanraj meets Anupama and gives her strange looks to show that she isn’t the only one who can handle her work. He asks Baa to make tea for him. He wants to defeat Anupama. Anupama wants Baa to take rest. She goes to make tea. Vanraj tries to insult Anupama by showing her right place. He tells her that her identity is just because of him. He adds that she is his wife, nothing else. He asks her to get the tiffin and tea fast else he will get late for office.

He laughs at her. She tells that she lost the job because of her family issues. She is sure that she is capable, confident and talented to earn the money. Vanraj asks her to make food and earn money, since she can just do this work. He thinks she was playing a game with him, now he will show her how to play the game right. He wants to take revenge on her. Anupama gets confident to find a job and make her own identity. She boosts her morale. She thinks she can really do something. She doesn’t know how to make a start. Samar meets Nandini.

Samar patches up with Nandini. They forget their fight. Meanwhile, Vanraj meets Kavya. He is in a bad mood because of Anupama. He complains about Anupama. Kavya tells that Anupama won’t divorce him. Vanraj tells that Anupama is a puppet in his hands, he will control her, he will not let her do the wishful. She tells that he can’t lose to a woman, he can never tolerate it. Vanraj takes the tiffin to have food. He gets a note inside. They don’t see any food inside. He is angry on reading Anupama’s note. Anupama doesn’t care for Vanraj and Kavya’s relation. Anupama wants to become an independent woman. She begins her journey to achieve her new identity.

Reviewed Rating for this particular episode Anupama 4th November 2020 Written Update Vanraj demeans Anupama:4/5
This rating is solely based on the opinion of the writer. You may post your own take on the show in the comment section below.