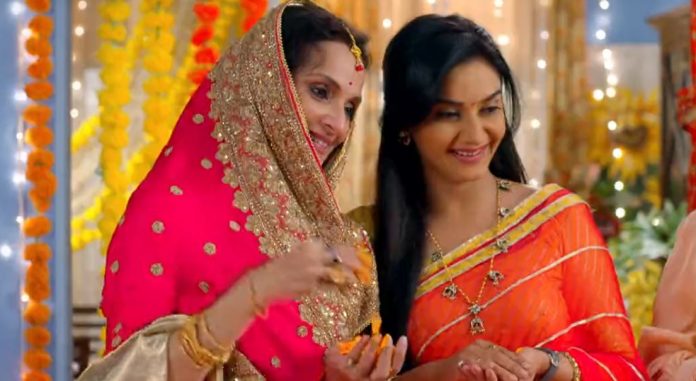 Shaadi Mubarak 4th November 2020 Written Update Good news for Preeti Kusum and Preeti are celebrating Diwali. KT uses to celebrate Diwali with much fun always, but he is much upset this time. He wants to get work for the company so that Preeti doesn’t leave Shaadi Mubarak. He wants something to happen that Preeti stays back with him. He gets a good news on the call.

He gets too happy and wishes his family happy Diwali with a smile. Neelima finds his smile and happiness back. She wishes that he always stay happy. Buasa and Phupa ji come home to meet Preeti. Kusum thinks Tarun has sent them again to complain about Preeti. Preeti tells that she has called Buasa home. Rati also learns about the relatives’ arrival. She tells Tarun that Preeti would have called them to take help.

She asks him to stop the relatives from shouldering Preeti. Tarun thinks Preeti is trying hard to not return home. Preeti tells Buasa about Tarun’s mean act against her. She reveals that Tarun and Rati were ruining Priyanka’s alliance. She doesn’t want to forgive Tarun. She tells Buasa that she doesn’t want to go to Tarun’s house.

Further, Tarun meets them and overhears the talks. He tells Buasa that Preeti is clever and called her home with a motive. He tells that Preeti doesn’t want to return to his house now, since she got habitual to have fun now. He adds that she has lost her way now. Buasa angrily slaps him. She asks him not to talk such cheap things about his mother. She tells that Preeti made them proud by having a fight for her self esteem.

She wants Preeti to live as she wants, since its her life. Preeti gets glad. KT makes an entry playing the dhol. He dances with Kusum’s daughters. He tells Preeti that he is celebrating her success. Preeti tells that she has lost the challenge. Rati asks KT how did Preeti win. KT asks them to search about Preeti Jindal on the internet. He reveals that Preeti has become famous, her perception about Aryan Mantri’s wedding is trending on the social media, she has earned many followers, she is being appreciated.

Kusum tells that Preeti has got famous, she has succeeded and passed Tarun’s challenge. She tells Tarun that Preeti completed his challenge. Preeti is much happy that KT got the good news on time. She ousts Tarun and Rati. Preeti and KT get together and appreciate each other.

KT tells Preeti that her thoughts are pure, she will always do well. Preeti is hesitant to shake hands with him in front of the elders. Buasa asks her to shake hands and not be hesitant, she has to match with the world. She gives a wedding contract to Preeti. She tells that its her 50th wedding anniversary, her children want her to get remarried to her husband. She asks Preeti to manage her wedding. Preeti doesn’t want to accept money. Buasa tells that its her work now, not any duty. Buasa blesses Preeti and KT for their first ever wedding contract. Preeti is afraid that people can’t understand KT and her partnership. Preeti is surprised when she meets KT in the village.

Reviewed Rating for this particular episode Shaadi Mubarak 4th November 2020 Written Update Good news for Preeti:4/5
This rating is solely based on the opinion of the writer. You may post your own take on the show in the comment section below.