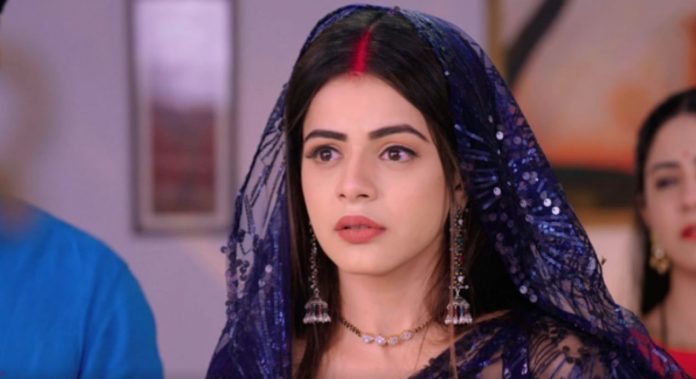 Shakti 4th November 2020 Written Update Heer’s first Karwachauth Preeto wants to stay in Heer’s room to calm her heart. She is stressed. She falls down on the stairs and gets hurt. Harak gets worried for Preeto. He reaches her in time. She insists him that she will talk to Virat. She asks Virat about Heer. Virat tells her that Heer is fine. He doesn’t want her to worry. Preeto’s tensions don’t end. Daljeet returns home after solving a big case.

Everyone congratulates him. Daljeet apologizes for not attending Virat’s marriage. Parmeet tells that Heer is sleeping till late. She taunts Virat. She wants Virat to explain the house rules to Heer. Heer apologizes to Parmeet. Parmeet gets rude towards her. She throws water at her face to break her sleepiness. Virat takes a stand for Heer. Parmeet asks Heer to not sleep late again. She wants Gurvinder to teach the rules to Heer. Virat doesn’t want Heer to take stress.

He tells her that Parmeet will understand that she is new in the family. He gets into a moment with Heer. He helps Heer in getting ready. He likes her pretty face and wants her to be smiling always. Heer knows that he loves her a lot. The kinners come home to bless the newly weds. Mallika tells that she has come to meet Heer and take the Nek shagun from them.

Sant tells her that he will give the Nek. He asks them to stand at the door. Heer tells them that she has an old bond with the kinners. Parmeet warns Heer to not keep any terms with the kinners. She reprimands Heer. She wants Heer to take her guests outside the house. She wants Heer to keep her respect. Virat surprisingly takes a stand for kinners. He tells that kinners are also humans. He tells that Nutan was a kinner, who saved his life.

He wants his family to treat kinners well. Heer tells that kinners used to visit her house as well. Sant tells that Soumya was a kinner, but there is no kinner in his house. He doesn’t want the society to ruin their respect. Parmeet tells that Harak doesn’t care if the society insults his family. She wants to keep her pride in the society. She insults Mallika and others. She tells that she is the owner of the house and her decision will be final.

Heer tells that she will go out and meet the kinners. Sant asks Heer why is she going against their wish. He asks her to end her terms with the kinners. Virat supports Heer. Virat and Heer take blessings from Mallika. Heer obeys her in-laws. She asks Mallika to leave. She wants the kinners to go away. She also steps out of the house along with them. She hugs Mallika. She feels mother’s affection from her. She tells that she was doing her duty as a Bahu. She wants to succeed and become a daughter for Virat’s family.

Parmeet gives the Nek to Mallika. She refuses to take Mallika’s blessings. She asks Mallika not to dare touch her. After all the drama, Parmeet asks Heer to not let her complain again. Virat asks Heer not to wake up early every morning. Heer keeps him away from Parmeet and her matter. Parmeet asks Heer not to compromise with discipline and respect. Heer promises to remember her rules. She wants to prepare for the puja. Virat asks her not to take stress. He tells that they shall spend some romantic time. Moreover, Mallika meets Preeto. She tells Preeto that her conditions have kept Heer protected. She wants Preeto to take care.

Virat sends Heer’s video to them. Preeto and Harak get happy seeing Heer happy with her in-laws. Heer performs the aarti. Parmeet corrects her in some rituals. She doesn’t want Heer to mention about Soumya. Heer tells that she wants to end the negativity in the house by taking aarti in every corner. Virat learns about Karwachauth. He also wants to keep a fast for Heer.

Virat tells Heer that he will buy clothes and bangles for her. Heer wants Virat to get things of his choice, since its her first official Karwachauth fast. She gets excited for Karwachauth. Parmeet is still upset because of Preeto. She refuses to make Sargi for Heer. She tells that the marriage is still incomplete. She hurts Heer’s emotions further.

Reviewed Rating for this particular episode Shakti 4th November 2020 Written Update Heer’s first Karwachauth: 4/5
This rating is solely based on the opinion of the writer. You may post your own take on the show in the comment section below. 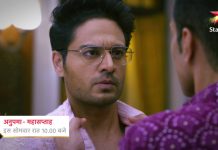 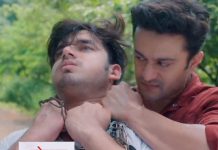 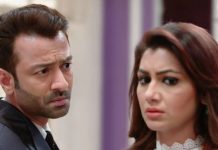