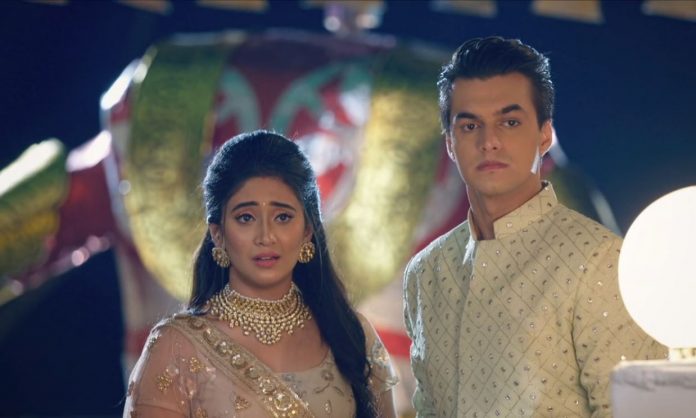 Yeh Rishta Kya Kehlata Hai 4th November 2020 Written Update Divorce tensions back Kartik and Naira get helpless seeing the situation where one of their child is trying to wrong the another. They take a decision to punish in a way that the kids understand their mistakes. They tell the kids that they will not talk to each other and also stay away from Akshara. Naira adds that no elders will be talking to the kids. Kartik asks Manish to just support them so that the kids understand their mistake.

He was living in an illusion that the kids have much love for each other, but he was wrong. He feels they didn’t learn a thing from Ram Leela skit. He scolds the kids for not keeping their promise of unity. He tells that he wanted the kids to bond well and trust each other, there should be love and respect between them but sadly their bonding got ruined completely. He didn’t wish to see the hatred in their hearts for each other. Somewhere Kartik and Naira feel defeated because of Kairav and Krishna’s mistakes.

They die within when they yell at their children and scare them with the punishment. But they also think that its the most necessary action to take right now so that Akshara or anyone else doesn’t fall into trouble by their mistakes. Moreover, Kartik and Naira share their grief.

They have sinking hearts that they were so rude and strict towards their children. They didn’t wish to hurt anyone’s sentiments. Naira tells him that they have to be strong until their motive is fulfilled. She wants to teach the kids that they should be true and loyal towards each other, that’s what makes a family united. She asks Kartik not to think of Kairav or Krishna’s pain, because they have to end the fights for once and all. Kartik supports Naira. He just hopes that the kids change their hearts and eradicate the growing jealousy.

Kairav, Vansh, Krish and Krishna are punished to stay away from the family. Krishna doesn’t get anyone to talk. Her punishment gets worse since she gets blamed by everyone in the family. Kartik feels sorry for Krishna, who isn’t accepted by anyone. He wants the family to treat Krishna equally. Krishna’s sacrifice for Kairav goes unnoticed. Krish and Vansh get against Krishna further. Kairav has no complains with Krishna now. He feels he has done a worse act by risking his baby sister’s life.

He is much guilty of his mistake. Krishna wants some way to bond with her brothers. Kairav gets a nightmare of Akshara falling in danger. He madly runs to check on her, but gets hindered by Kartik and Naira. Naira doesn’t want Kartik to melt his heart. She tells him that they have to be strict until Kairav realizes his mistake. She believes that her upbringing isn’t wrong.

On the other hand, Dadi isn’t tired of blaming Krishna. Dadi always accuses Krishna for anyone’s mistake. Manish and Suwarna tell that its not right to accuse Krishna when the fault was of Kairav. Manish is hurt by Kairav’s mistake. He didn’t know Manish will take such a step. He had already warned Kartik of Kairav’s insecurity. Kartik thinks if he had made a mistake by adopting Krishna, since Kairav took that step because of Krishna.

Naira tells Kartik that they would have lost Krishna forever if they didn’t complete the adoption process that day in a rush. She tells that they shouldn’t regret on their decision. Kartik tells her that they will try to bring their kids together. He wants to make their bonding so strong that nothing affects them. Naira encourages Kartik. Dadi still believes that its Krishna’s fault. Manish, Akhilesh and Suwarna take Krishna’s side for the first time. Dadi is displeased. She can’t tolerate Krishna in the family.

She wants the kids to evaluate themselves and correct their bad habits. The kids are made away from the festive. The family misses them. The kids start realizing their mistake. They note down their bad habits on the chits. They meet Kartik and Naira to admit their mistakes and apologize. Also, Kairav hands over the chits and asks Kartik to burn it with the Raavan. Kartik gets emotional seeing the sad faces of all the kids. Naira also thinks that the kids have realized their mistake. Kartik and Naira decide to forgive them. The family celebrates Raavan Dahan, while Naksh and Kirti’s divorce brings new tension.

Reviewed Rating for this particular episode Yeh Rishta Kya Kehlata Hai 4th November 2020 Written Update Divorce tensions back:4/5
This rating is solely based on the opinion of the writer. You may post your own take on the show in the comment section below.