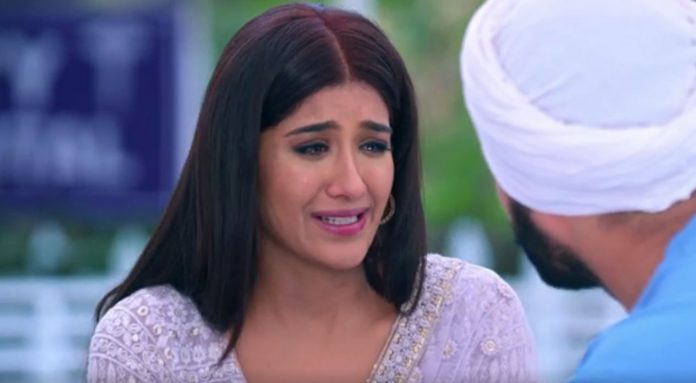 Choti Sardarni 5th November 2020 Written Update Meher reveals the truth Meher is worried after Manav clearly threatened her that he will be taking Karan with him before Diwali arrives. Meher doesn’t want to lose her son. She knows that Sarabjeet also loves Karan a lot. She meets Sarabjeet. She has the fear that Karan will be snatched from her. She tells Sarabjeet that they will be losing Karan. She apologizes to him that she couldn’t save Karan. Sarabjeet is shocked to see her broken.

He asks her the reason for her tension. He asks her who is going to snatch Karan. She reveals the truth that Manav has threatened her that he will take Karan away from her. Sarabjeet asks her if Manav is really alive. He asks if she met Manav or did Manav call her to say this. He enquires about Manav. Meher comes clean by saying the entire truth to Sarabjeet. She tells him that Vikram Diwan is Manav, he knows Karan is his child and wants him back. Sarabjeet is very much shocked to know that Vikram is Manav, Meher’s ex-lover, who is now Aditi’s husband.

Sarabjeet is much worried. Meher finds him taking the shock on his heart. Will Meher really tell the truth to Sarabjeet or not? Will she worry for his sensitive condition right now and hide the truth for long? We love Meher and Sarabjeet’s pairing in the show. But, we also love the character of Manav. What do you think? Who is right at this time? Meher or Manav? Keep reading for more updates.

Meher takes care of Karan. She cries that her son may get away from her any time. She is affected by Manav’s words. She doesn’t want Karan to go away. She decides to take Karan to Sarabjeet. She tells Harleen that she will take Param later, since he has online classes. Harleen asks her to go and visit Sarabjeet. Manav surprises Seema and Aditi by making tea for them. He makes Aditi feel special. He tells that he will make tea for the ladies every day.

He gets to see Karan’s picture on Aditi’s tab, which is shared by Meher. He asks Aditi to share Karan’s picture on his number, so that he keeps it on the wallpaper. Aditi sees his love for Karan and is much glad. He tells that Karan is so lovely that he draws attention. Seema asks them to plan a baby. Manav tells that Karan is his baby. He tells that he loves Karan as his own baby. Seema wants to see her family heir. Aditi tells that she has to rush for hospital to check Sarabjeet’s important reports.

Sarabjeet shows good progress. He senses Karan’s arrival. He is much happy to meet his little son. Doctor tells Meher that Sarabjeet’s walk got better after seeing his son. Sarabjeet tells that his son is his life. Meher wants Sarabjeet to take rest. Sarabjeet loves Karan a lot. He tells Karan that he was missing him a lot. He is thankful to Meher for pleasing his heart. Meher feels guilty that he isn’t aware of the truth. Sarabjeet wants Meher to share the tension. He doesn’t like to see tears in her eyes.

He enquires further. She makes an apology to him. She tells him that he got shot by the bullet which was meant for her. She didn’t wish him to get away from the family. She feels she is unlucky for him. She tells that they should have not got married. He consoles her. He tells that it was their fate that they met. He tells Meher that she has put life in him. He thanks her for bringing happiness in his life by giving him Karan. He tells that Param, Karan and they will be happy always.

She gets scared. She breaks down and reveals about Manav, who will snatch Karan from them. On the other hand, Kulwant wants to ruin Manav. She tells that she is the most clever person to win the game. She can’t afford to lose. She doesn’t want to go to jail because of Sarabjeet. She tells that she will bring out the truth in front of Sarabjeet that Vikram is Manav. She plans to tell Seema as well. She tells that she will protect herself and her sons also. Sarabjeet tells Meher that Manav is in Banaras. He asks if Manav has come to Amritsar or contacted her. He worries if Manav has threatened Meher.

Meher reveals to him that Vikram is Manav. He can’t believe the truth. He asks her to say again. Meher admits the truth. He is shattered. He finds it impossible. Meher asks him not to take stress. He asks her how did Manav get parents, when he was an orphan. He wants to know the reason why Vikram married Aditi. She tells him that she should have not told him the truth, but she is afraid for Karan. Sarabjeet tells her that he will handle himself. He asks her the entire story.

She tells him that Manav didn’t know his identity, he had a memory loss, he recalled everything when he took rounds with Aditi. She reveals that Manav met her in Serbia and wanted her to come back to him. She feels she is not the old Meher, not the Meher who is born because of Sarabjeet’s goodness. She didn’t have courage to tell him about Manav since he was worried for Aditi. She wanted to keep silent for the sake of Aditi’s happiness. She tells that she spoke to Manav and tried hard to convince him that she has moved on.

She adds that she had told Manav that Sarabjeet is his God, but Manav didn’t listen to her. Sarabjeet understands that Manav was pleading him for his love on the night when he got shot by Surya. Meher tells him that Manav had come to their room to attack him, but changed his mind. She tells him that she didn’t wish to tell the truth to him, since she is afraid for his health. She apologizes to him.

Reviewed Rating for this particular episode Choti Sardarni 5th November 2020 Written Update Meher reveals the truth: 5/5
This rating is solely based on the opinion of the writer. You may post your own take on the show in the comment section below.