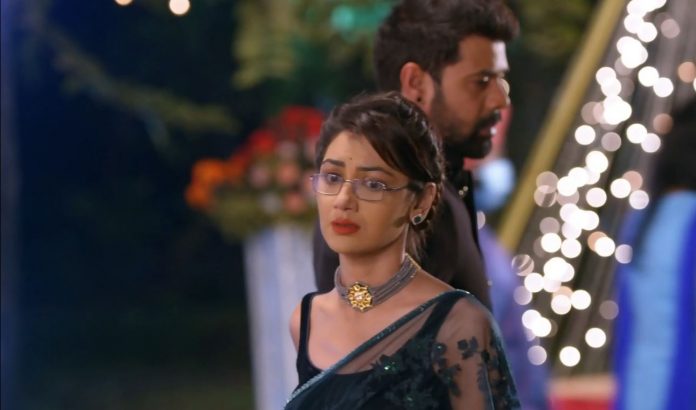 Kumkum Bhagya 7th November 2020 Written Update Abhi reflects pain Abhi and Pragya get to meet in the celebrations. They have a moment. Abhi is hurt by her words and lets her free. Mitali happens to witness their moment. Ranbir overhears Pallavi and Dida’s conversation. He gets to know that they are planning a surprise for him. He is excited to see the ring. He is mistaken that they have accepted Prachi. They don’t know that they are planning his engagement with Rhea. Rhea is glad to know that Pallavi has bought the ring for her.

Pallavi tells Ranbir that he should keep patience. He thinks Prachi is selected by them already. Ranbir goes on Aryan’s call. He tells Aryan that there is a surprise engagement at night. He tells that Prachi will be surprised soon. He tells him that Pallavi had slapped him before, but now she has accepted Prachi. He informs that engagement ring is also bought by Pallavi. Aryan wants Ranbir to dance. They get weirdly dancing to express happiness.

Mitali goes to inform Aaliya. Aaliya wants Rhea to enjoy the function. Mitali tells Aaliya that she has seen Pragya. She asks Aaliya to stop Pragya from entering the house. Aaliya asks her not to talk about Pragya in front of Rhea. Mitali tells that Abhi was holding Pragya’s hand. Aaliya tells that Abhi hates Pragya, he will never bring her back. She asks Mitali to take revenge on Pragya and not treat her like a queen now.

Vikram calls Abhi for some work. Aryan and Ranbir present the Ramleela. Mitali tells Raj that Pragya has come with Sarita, they work together in the catering business. Raj gets upset on knowing that Pragya has come. Vikram tells that it will be fun to watch Raavan Dahan. Abhi hides about Pragya. Vikram asks him what is he hiding. Vikram asks what’s going on in his mind, if Anuradha is related to him. Abhi recalls his marriage with Pragya. He sees a man staring at Pragya. He goes to safeguard her. He makes the man away.

Aaliya asks Pragya not to keep an eye on Abhi. Pragya tells that she knows Abhi better than her. She doesn’t want Aaliya to teach her. Ranbir finally gets to see Prachi, who is managing the event. Ranbir doesn’t want Prachi to work. She tells him that she has much work. He tells that he will do her work. She asks him not to upset his family. He tells that she is also his family. He shares her work. Ranbir wants to tell Prachi about their surprise engagement. Rhea gets angered watching them together.

Reviewed Rating for this particular episode Kumkum Bhagya 7th November 2020 Written Update Abhi reflects pain: 3/5
This rating is solely based on the opinion of the writer. You may post your own take on the show in the comment section below.