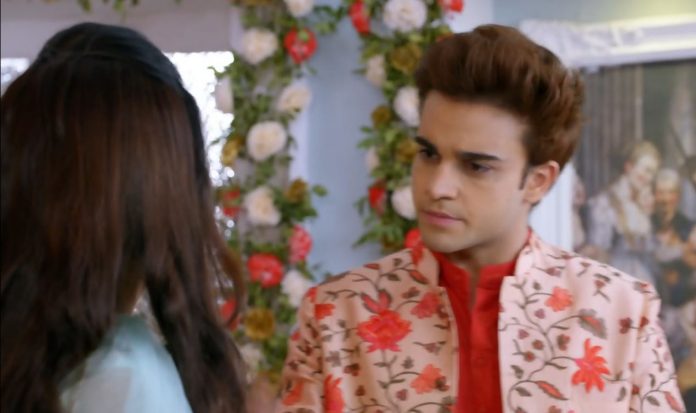 Kumkum Bhagya 10th November 2020 Written Update Shocker for Ranbir Prachi apologizes to Ranbir for hurting his feelings. Rhea finds them together. Ranbir wants to keep Prachi happy. He tells her that he wants to give her all the happiness she deserves. He can’t see her so upset and crying. He feels hurt to see her tears. He tells her that he loves her. He can do anything for her happiness. He tells that the family is going to give them a surprise, that’s their engagement. She can’t believe it.

She thinks if Pallavi’s bad behavior was a drama. Ranbir makes Prachi wear the engagement ring. Rhea is hurt to see this. Ranbir tells Prachi that its their fate that they will unite. Abhi wants Pragya to confess her love for him if she loves him. He gives her an ultimatum. Pragya tells Abhi that she loves him. She wishes that he understands her feelings. He wants their moments back. He wants Pragya in his life. His anger is nothing but his love, which flows in the form of tears. Pragya doesn’t want him to cry.

Ranbir wants to name his life to Prachi. Rhea is upset. She tells Pallavi that Ranbir had put the engagement ring on Prachi’s finger. Pallavi and Aaliya are shocked to know this. Rhea tells that Ranbir wants to be with Prachi. Aaliya asks Pallavi if she didn’t tell Ranbir about his engagement with Rhea. Pallavi promises that she will get Ranbir engaged to Rhea. She wants to know if Rhea really loves Ranbir. Rhea tells her that she loves Ranbir.

Abhi questions Pragya. She tells him that she has the answer. She asks him why is he asking her as if he doesn’t know her love. She prefers to not answer him. He tells her that she doesn’t care for him. She reminds him why she left from his life. He tells her that he wants to tell everyone about their relation. Pragya doesn’t want anyone to know. Abhi wants her to return to him. They have a moment.

Abhi and Pragya hide from Sarita while they have a romantic time. Abhi doesn’t want Sarita to become a hurdle in their romance. He tells Sarita that he is changing clothes. Sarita goes away. He tells Pragya that he will not let anyone know about them if she wants. Mitali calls Pragya out. Abhi tells her that he doesn’t want anyone to know that they were together. He wants to avoid Mitali. Prachi tells Ranbir that the ring is beautiful.

Ranbir tells her that their story will get fine soon. She asks him to remove the ring. Dida sees them together and misunderstands Prachi. He asks her not to remove the ring and just keep it hidden. Dida treats Prachi like a servant. Ranbir is shocked to see Dida’s behavior. Dida orders Prachi to do her work. Ranbir takes a stand for Prachi. Dida can’t tolerate that he shouted on her. She tells him that she will not forgive him. He apologizes to her. Aaliya asks Rhea to remove Prachi from her life. Rhea asks Aaliya not to think of harming Prachi. Aryan tries to clear Ranbir’s misunderstanding. He tells Ranbir that his family is going to announce his engagement with Rhea. Ranbir is super shocked knowing this news.

Reviewed Rating for this particular episode Kumkum Bhagya 10th November 2020 Written Update Shocker for Ranbir: 5/5
This rating is solely based on the opinion of the writer. You may post your own take on the show in the comment section below.