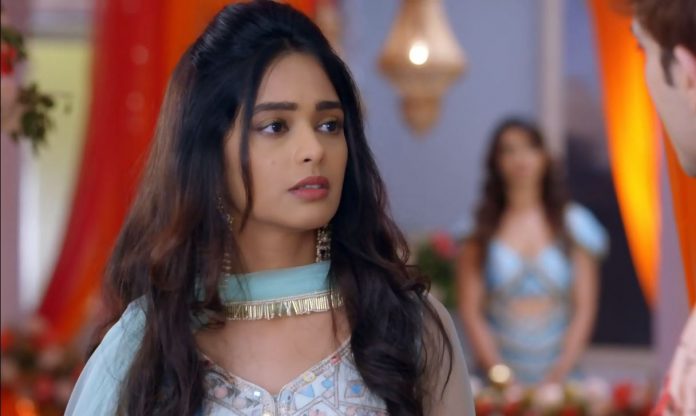 Kumkum Bhagya 11th November 2020 Written Update Sanju enters to kidnap Prachi Abhi calls up Mitali to send her away from the room. Pragya asks if Mitali knows about Prachi and her. He tells that just Aaliya knows about it. He doesn’t want to go against her wish. He asks her not to worry. Pragya tells him that she has to ask him something. She asks him if he still loves her. He tells her that if she needs to ask this question to him, then there is nothing between them. She gives him the answer. He tells her that he hates her.

She tells that she also hates him. They have an emotional moment. They have a longing for each other. Prachi is glad to have the engagement ring. Shahana teases her to ask if she has secretly married Ranbir. Prachi is shy to tell her anything. Aryan overhears their conversation. He is happy for Ranbir. Meanwhile, Aaliya asks Rhea to rest assured that Prachi can’t come between Ranbir and her. Rhea wants to kill herself if she doesn’t get engaged to Ranbir. Aaliya asks her not to get negative. Rhea swears to die.

Aaliya hugs her to pacify. She can’t let Rhea die. She tells that she will kill Prachi to make him out of Ranbir’s life. Rhea asks her not to harm Prachi. Aryan asks Ranbir if he has secretly got engaged to Prachi. Ranbir tells that he didn’t get engaged, he gave the ring to Prachi. Ranbir asks him to keep it a secret.

Ranbir can’t let it happen. Rhea tells Aaliya that she doesn’t regard Prachi her sister, but she still regards Pragya as her mom. Aaliya reminds that Prachi has hurt her. Rhea tells that Pragya will shatter if anything happens to Prachi. Aaliya tells that she will make Prachi out of the party before the engagement. She promises that she will not harm Prachi. She asks Aaliya’s plan to make Prachi away. Aaliya and Rhea call up Sanju to get his help.

She tells him that Ranbir and Prachi are getting engaged. She calls Sanju to the party. Sanju wants to rush there and stop the engagement. Ranbir gives an assurance to Pragya that he will fix everything for Prachi and him. He is thankful that she accepted him. Abhi thinks to inform Pragya about Ranbir and Rhea. Vikram stops him from meeting Pragya. Abhi tells Vikram that he has lost control on his heart since he has seen Pragya.

Sarita and Vikram misunderstand him, since they don’t know his relation with Pragya. Ranbir wants to speak to Pallavi. He finds Dida in a bad state. He asks Pallavi to listen to him. He tells that he had a misunderstanding, he can’t get engaged to Rhea, he just loves Prachi. He gets into an argument with his family. The family forces him to get engaged to Rhea. Ranbir begs them to give him his love. He proves that he loves Prachi a lot. Abhi meets Prachi in the party. He gets emotional. Sanju reaches the party and kidnaps Prachi.

Reviewed Rating for this particular episodeKumkum Bhagya 11th November 2020 Written Update Sanju enters to kidnap Prachi: 5/5
This rating is solely based on the opinion of the writer. You may post your own take on the show in the comment section below.