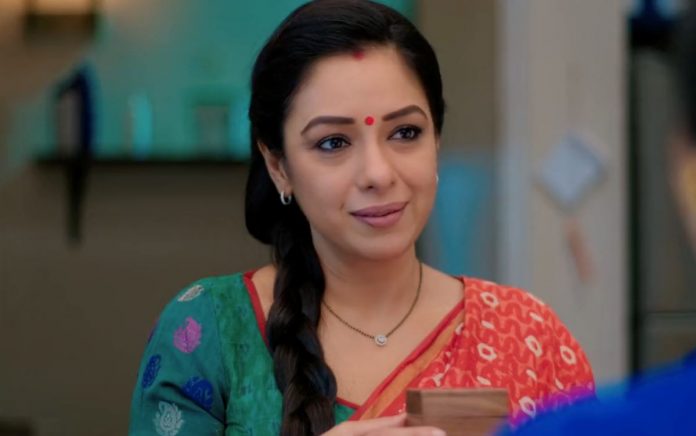 Anupama 13th November 2020 Written Update Celebrations time Anupama is proud that she has started to learn car driving. She thanks Kinjal. She has learnt a lot from Baa. She wants to learn from Kinjal. Kinjal tells that she has to learn from Anupama. She praises Anupama to be so humble and sensible. Anupama doesn’t understand the praise in English. They have a hug. Anupama tells her that she will prepare food for her. Nandini and Samar also accompany Anupama. Kinjal asks Anupama not to take stress.

Nandini also wants Anupama to take a round. Baa asks Anupama to do kitchen work and get her stress off. Kinjal asks Baa to teach her making sweets for Dhanteras. Baa agrees to teach her. Anupama wants to be at home. Baa tells that she isn’t a kid to get tricked easily. She tells her that she didn’t permit her to learn car driving. She asks the reason for learning it now. Anupama tells that she is learning it for elders’ sake, she doesn’t know when the need arises. Baa asks her to just obey her and not rebel. Anupama doesn’t say anything.

Samar dreams of a romantic moment with Nandini. He wants to tell her that she looks very cute. His dream breaks. Nandini wants him to help her in the work. Samar tells that he has come to help. He knows that she is an independent girl, but there is nothing wrong to take help from a friend. She tells him that he looks like an idiot to her. He gets worried. She misses his mum. She tells him that she is missing a mum on the festive day.

He asks her to celebrate Diwali with his family. She happily hugs him. Samar is glad. The entire family make preparations for Diwali. Baa is still upset with Anupama. Samar finds Baa taunting Anupama. Paritosh informs them that Bapu ji is coming home from the hospital. Samar asks Anupama not to hear Baa’s taunts and tell the truth. Anupama doesn’t want to tell the truth, which will make Baa and Bapu ji lose faith on their upbringing.

She doesn’t want Bapu ji to get hurt. Samar calls her a very strong woman. He gets a good news that five students got registered seeing her demo class. He tells that she will be a dance teacher now. She tells that she will work hard even if there is one student or fifty. Pakhi is happy that her mum is becoming an independent woman. Vanraj comes home. Pakhi tells him that Anupama is going to take dance classes. Vanraj tells her that this will not work in his house, Anupama and Samar have to leave the house if they continue to dance.

Anupama doesn’t want to put Samar in trouble. She wants to sacrifice her dance classes for the sake of Samar’s future. Sanjay comes home to meet them. She confronts him about hiding Vanraj’s mistake. He apologizes to her. He tells that he just wanted to stop Vanraj and bring him on the right path. He didn’t wish to hurt Anupama. Anupama forgives him. The family prepares a good welcome for Bapu ji. Bapu ji is very happy to get such a warm welcome.

Baa asks him to take care of himself. Bapu ji tells her that he has realized that he can’t stay without his family. He thanks Anupama for saving his life. He gives her the credit, which makes Vanraj ashamed. Vanraj isn’t able to meet Bapu ji’s eyes. Vanraj loves his dad a lot. The festive day gets double celebrations because of Bapu ji. Anupama asks Baa to buy utensils as its auspicious.

She tells that they shall fix Paritosh and Kinjal’s marriage date and inform Rakhi. Vanraj thinks Anupama got egoistic, she is deciding about Paritosh’s marriage alone. He wants to break her ego. Baa agrees to Anupama’s advice. Bapu ji makes his will. He divides his property equally between Vanraj and Anupama. Vanraj is shocked by his decision.

Reviewed Rating for this particular episode Anupama 13th November 2020 Written Update Celebrations time: 5/5
This rating is solely based on the opinion of the writer. You may post your own take on the show in the comment section below.