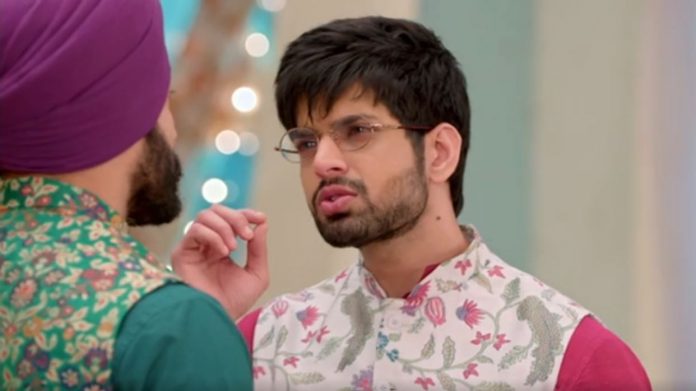 Choti Sardarni 14th November 2020 Written Update Manav slams Sarab with the claim for Karan. Manav doesn’t change his decision to get his little bundle of joy Karan along with him. He connects to Meher after everything settles in Meher’s family. He asks Meher to hand over Karan to him. Meher asks him to accept the decision of God, that she is destined to raise Karan. She refuses to give her son to him. Manav threatens her to create a huge drama in the house, that her family will be shattered. Sarabjeet stops Manav from snatching Karan from Meher.

Manav asks Sarabjeet not to get between them. He tell that its Diwali’s day and he wants his son. Sarabjeet asks him to leave Karan. Manav threatens him as well. Sarabjeet asks if he is threatening, then what can he do. Manav tells him that he can divorce Aditi and ruin her life, which may not please Sarabjeet and Meher. Sarabjeet is worried for his sister’s marriage. Keep reading to know whether Sarabjeet will hand over Karan to Manav or not. What do you think who has the most right on Karan, Manav or Sarabjeet? Comment below.

The family is happy that Meher and Sarabjeet are fine. They think if Pathak is responsible for the attack. Manav is worried for Karan. He asks Aditi to take an appointment with the doctor for Karan. Sarabjeet tells him that he can take care of his son. He tells the family that he will not go back to the hospital back, Meher will be treating him at home. He regrets that he was away from the family when he was most needed.

Kulwant cheers up Param and asks him to have the laddoos. Meher and Sarabjeet get to know about Kulwant’s move to bond with them. Kulwant thanks Sarabjeet for inviting her home. Sarabjeet tells Param that they are helpless for his sake. Manav gets angry on the police, who come late. He asks inspector why did he get late, he had to do his duty on time. Sarabjeet asks Manav to calm down. He asks police to do their duty. Police investigates the attack. Manav tells Sarabjeet that Karan would have died. Kulwant tells him that Karan is most secure with Sarabjeet. She stops him from worrying for Karan so much.

Sarabjeet tells the inspector that he will not spare the attackers, who attempted to kill his family. He asks Inspector to investigate well. Meher gives her statement to the police. Sarabjeet finds Param upset. Param feels its diwali got ruined. Sarabjeet tells Param that the day didn’t end, they will celebrate Diwali well. He cheers up his son. Meher feels sorry that the Diwali really got spoiled. Sarabjeet asks her not to feel sorry, the children are proud of her, she had saved their children with all her bravery. He praises her for being so strong and fighting so many goons alone. He feels proud of her.

She tells him that she owes her bravery to two people in her life, who mean a world to her. She praises her dad and Sarabjeet, who have always encouraged her and gave her strength. She tells him that he is her strength. He promises to always be with her and always motivate her. He asks her to be normal and happy for Param’s sake. He tells that Param is feeling the trauma and is much upset, he wants to celebrate Diwali and they have to make it special for Param. He asks her to just keep smiling and celebrate the festive with Param. She is ready to celebrate the festive with more happiness for Param’s sake.

Seema gets crackers and sweets for Param. She tells that its Karan’s first Diwali. Manav just wants Karan with him. Kulwant asks him what gift did he get for Karan. Manav tells that he has come to take Karan. Kulwant jokes that he failed last time. Kulwant also tries to be good towards Sarabjeet so that she gets back her position in his good books. Manav wishes happy diwali to Karan. He wants to take Karan along soon. Kulwant feeds the laddoos to Param.

She also takes Param to Sarabjeet. She asks Sarabjeet to eat laddoo, but he refuses. He tells that he is sorry to upset her, but he doesn’t want any sweets. He wants to be away from Kulwant. He politely handles her. She understands that he didn’t forgive her by now. Param gets scared seeing the crackers, which remind him of the blast. Sarabjeet asks Bittu not to light more crackers. He asks Meher to do something to end Param’s fear. The family sings and tries to cheer up Param. What will Manav do next? Stay tuned.

Reviewed Rating for this particular episode Choti Sardarni 14th November 2020 Written Update Manav slams Sarab: 3/5
This rating is solely based on the opinion of the writer. You may post your own take on the show in the comment section below.