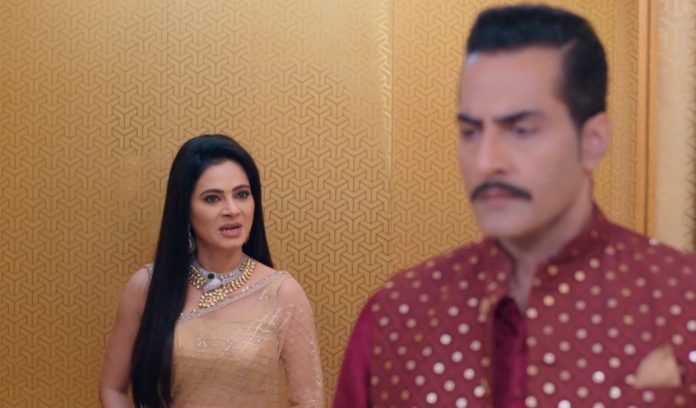 Anupama 16th November 2020 Written Update Rakhi threatens Vanraj Vanraj can’t see Anupama getting a voice of her own. She tells him that she will never snatch anything from him. He tells her that she has no status to snatch anything. She gifts him the house as a gift on Diwali. She leaves him insulted. He burns the paper in anger. Hasmukh tries to explain his decision to Baa. He tells her that everything belongs to Vanraj and Anupama. He had to give the property to them. Baa is hurt that he has given the share to Anupama also.

She tells that Vanraj is their blood. He asks her why did she get property on her name before. He explains that Anupama will never leave them. Anupama gets decked up for the Diwali. She wants to look good for herself. She feels happy. She insults Vanraj. He wants her to not be rude like always. He goes to meet Kavya. He sees Kavya in a traditional attire. He imagines Anupama in her. She is thankful to him that he has come to celebrate the festival with her.

She asks him why is he thinking of Anupama that he is seeing her everywhere. She feels she is at fault that she thinks a lot for him. Her mood gets spoiled. He apologizes to her. She wants him to leave. Nandini likes Anupama’s Rangoli. She misses her mother. Anupama tells her that she is always there for her. She encourages Nandini. She doesn’t want Nandini to underestimate herself. Nandini learns Rangoli making from her.

Meanwhile, Samar and Nandini get into a moment while making the Rangoli. He wants to tell her that he loves her. Vanraj tells Kavya that Anupama has become half owner of the house. Kavya asks him to give the house to Anupama as security after the divorce. She tells that Anupama doesn’t earn, while they can earn and manage their lives. He doesn’t want Anupama to win. She asks him to end the fight by divorcing Anupama. He can’t give divorce to Anupama. He tells her that they both are hurting him a lot.

He is fed up with Anupama’s attitude and Kavya’s complains. He wants some peace in her life. He tells her that he will stop coming to her if he doesn’t get any peace. Kavya isn’t scared of his threatening. She asks him to just go wherever he wants. She tells that Anupama had become a problem for them, she is always coming between them, she isn’t able to make her out of his life. She doesn’t want him to ill treat her like Anupama.

She makes Vanraj out of her house. She is sorrowful that her Diwali has turned dark. She cries a lot in sorrow. Vanraj gets caught by Rakhi. She asks him why did he come out on the festive day. Vanraj tells that there is still time for puja. She asks him about Kavya. She tells that she knows about Kavya’s address. She wants a proof against him so that she can expose him. He doesn’t want her to act smart.

Rakhi tells him that Kinjal is scared that Paritosh can also go on him. Vanraj asks her to mind her own business. She confronts him about his relation with Kavya. Vanraj covers it up. She tells him that they will also get defamed if his mistake gets known to the world. She insults Vanraj for his affair. She threatens to end the alliance if he gets them humiliated. What will Vanraj do now? Keep reading.

Reviewed Rating for this particular episode Anupama 16th November 2020 Written Update Rakhi threatens Vanraj: 3/5
This rating is solely based on the opinion of the writer. You may post your own take on the show in the comment section below.