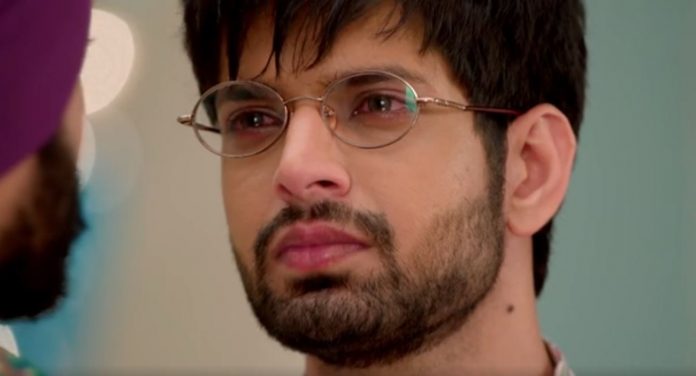 Choti Sardarni 16th November 2020 Written Update Manav’s adamant demand Manav demands Meher to give him Karan’s full custody, since he had waited till the Diwali eve. He tells her that he can’t wait for his son more. Meher refuses to him once again. He threatens to talk to Sarabjeet and ask for his son. He thinks Meher is finding hard to disclose it to Sarabjeet. He tells that he will directly talk to Sarabjeet. Sarabjeet intervenes to stop Manav. He tells Manav that Meher already told him the entire truth, he is also Karan’s father and can understand his pain.

Manav doesn’t think Sarabjeet can understand his pain. Sarabjeet tells that they can equally feel his pain. He asks Manav to show maturity in Karan’s matter, Karan’s happiness and future security is more important, he will be happy with his mother Meher. He tells that its really easy to claim rights, but its tough to keep the responsibility. He tells that he is ready to fulfill Karan’s responsibility. He asks Manav to rest assured that Karan is in safe hands.

He tells that he manages Karan since his first day in the world. He tells that Karan is his life. He reminds the day when Manav took away Karan with him. He explains that Karan can’t be handled without Meher. He asks him not to claim rights if he can’t keep his responsibility. Manav tells that parents teach everything to a child, and child teaches parenting to parents. He wants to learn to keep up his responsibility of being a good father.

He tells that he was also a single parent, he was wrong to think that he can take care of Param, but he couldn’t give him mother’s love. He is proud that Meher became Param’s mother. He requests Manav not to take Karan away from them. He asks Manav to meet Karan anytime he wants. Manav doesn’t want him to tell his decision. He decides to take Karan with him. He tells that Meher got ample time till now, but he will not wait for long. He gets adamant to get his son. Sarabjeet stops him.

She tells that she is hurt to hear his words. She apologizes to Meher and Sarabjeet on his behalf. She promises that Vikram and Aditi will never get divorced. Sarabjeet doesn’t want Seema to apologize. Manav bears all the anger on Seema’s behalf. Seema asks Manav to tell her about the woman who wants to destroy his family. Manav looks at Meher. Seema feels unwell after shouting a lot. Manav worries for her. Seema asks him to never talk of divorce if he wants to see her fine. Manav sheds tears for Seema. He feels helpless.

Aditi meets them and finds Seema crying. Sarabjeet tells Aditi that Seema is just emotional for Vikram, she was scolding him so that he takes care of himself. He wants Aditi to take good care of them. Aditi tells that Vikram is much emotional and doesn’t sleep at night, he shouldn’t be scolded. She wants to take good care of them. She proves that she is a good wife for Vikram. Manav has much anger for Meher and Sarabjeet, who snatched his son. What will Manav do next? Keep reading.

Reviewed Rating for this particular episode Choti Sardarni 16th November 2020 Written Update Manav’s adamant demand: 4/5
This rating is solely based on the opinion of the writer. You may post your own take on the show in the comment section below.