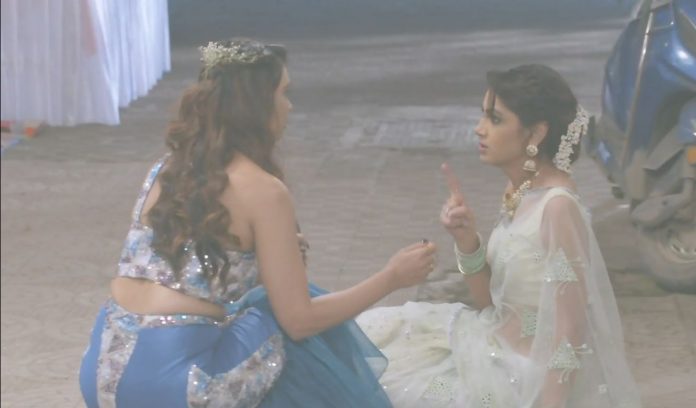 Kumkum Bhagya 18th November 2020 Written Update Pragya slaps Rhea Rhea acts in front of Pragya. Pragya had heard everything about Rhea and Sanju’s crime partnership. Sanju escapes from there. Pragya doesn’t want to leave Sanju free this time. She can’t forgive Rhea this time. Rhea worries that Sanju can get caught and then Abhi will also know her crimes. She doesn’t want Abhi to know anything about her crimes. Shahana tells Prachi that Abhi was talking too sweetly with her as if he is her real dad, when he isn’t related to her.

She wants Prachi to leave as well. Sanju tries to run away. He forgets the car keys. Pragya warns him to stop. Rhea tries to stop Pragya. Pragya catches Sanju and slaps him. He threatens to kill her. He tells her that he isn’t scared of her. Rhea asks Sanju to leave Pragya. He doesn’t want to leave her. Rhea begs him to leave Pragya. Pragya asks Rhea if she knows Sanju. Ranbir happens to come there. He finds Sanju keeping Pragya at the knife point.

He wants to bash up Sanju. Sanju flees from there. Pragya doesn’t want Rhea to show any sympathy when she is so evil. Pragya lands in trouble. Rhea worries for her mother. She risks herself to save Pragya. Abhi finds Meera and asks about Rhea. Meera thinks he is missing her. She tells him that Rhea had come home. Aaliya wants to bring Abhi and Meera close. Pragya scolds Rhea for planning to kill Prachi. She is hurt to say that Rhea is too evil. She asks Rhea not to fool her. She tells that she knows that Rhea has hired Sanju to get Prachi killed.

Rhea tells that she didn’t wish to kill Prachi. Pragya reminds that Rhea admitted the crime. Rhea tells that she wanted Prachi to die before, but not now. Pragya accuses Rhea for paying money to Sanju to kill Prachi. She feels Rhea is heartless, selfish and self-centred. She asks Rhea why did she blame Prachi for her suicide. She tells that Prachi isn’t making Ranbir away from her. She tells Rhea that Prachi has her values. She reveals that Prachi has faith in her, Prachi wants to believe her, she can never think wrong of her enemy too.

She asks Rhea not to get jealous of Prachi if her dad doesn’t love her. Rhea asks Pragya to stop it. She regrets that Prachi is still alive. Pragya slaps her. She warns Rhea to not say such a thing about Prachi. Rhea tells her that Prachi isn’t related to her. Pragya accepts that she is her mother and Prachi is her sister. Rhea reprimands her for accepting their relation. Pragya tells that she wanted to tell her about their relation. Rhea feels hurt when Pragya calls her daughter. Pragya apologizes for slapping her. Rhea doesn’t want her love.

Aaliya plans to send Meera to Abhi. She asks Abhi to change his clothes. She sends him back to the room. Rhea tells her that she had an emotional connection with Prachi after knowing the truth, she didn’t plan to harm Prachi, her heart melted towards Prachi. She feels Pragya never loved her, she didn’t even come to see her at the hospital, even after knowing her suicide attempt. Pragya wants to clarify that she had come to see her at the hospital. Rhea rebukes Pragya for ending their relation. She asks Pragya to just love Prachi. She doesn’t want to give any chance to Pragya. Aaliya asks Meera to go and help Abhi in selecting the new Kurta for the party.

Meera gets happy to spend time with Abhi. Abhi doesn’t change his kurta. He leaves from the room. He wants to see Pragya. He wonders what’s going on between Pragya and Rhea. Meera gets hindered by Dadi. Dadi tells Meera that Abhi asked for a cup of coffee. Meera happily goes to make coffee. Dadi knows that Aaliya is misusing Meera’s innocence. She realizes that Aaliya wants Meera and Abhi to come close, since Aaliya has a problem with Pragya. She doesn’t want to tell it to Abhi. Pragya wants Rhea to understand her love.

Reviewed Rating for this particular episode Kumkum Bhagya 18th November 2020 Written Update Pragya slaps Rhea: 4/5
This rating is solely based on the opinion of the writer. You may post your own take on the show in the comment section below.