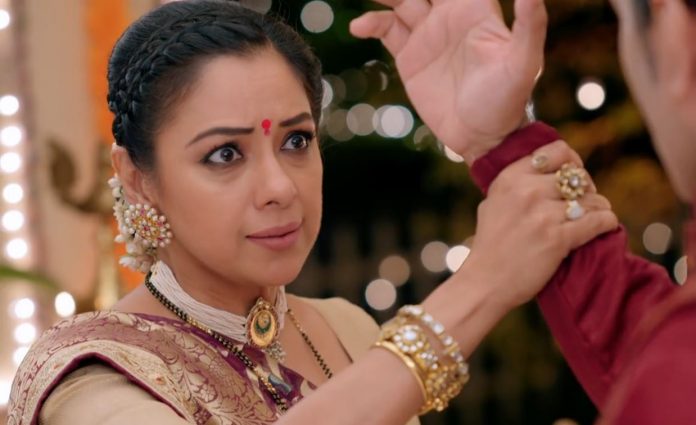 Anupama 18th November 2020 Written Update Tellyreviews.com Anupama lashes out Vanraj declares that he will never leave his ego. She tells that his ego is worthless, even if its precious for him, it won’t get him a rupee. He asks her to take it as ego or esteem. She asks him to keep his ego, and apologize to the family. He asks her how dare she lecture him, when she used to fear him so much before. She tells that she wasn’t afraid of him, she was afraid of the relation breaking. She tells that the relation broke now, and now there is no fear.

She doesn’t want to respect him after knowing his cheat. She asks him to just mend his ways. He gets a solid answer from her. She wants him to say sorry to the family. He belittles her again. He tells her that she is too clever, she had acted to be an innocent woman and brainwashed his family against him. He tells that she has snatched his family. He blames her for making Samar and everyone against him. Anupama asks him not to blame her for his own mistakes.

She tells hat he has to understand that it was his fault since the last 25 years. She asks him to at least not overlook her values. She tells him that Rakhi had threatened him for his affair, which is just his mistake. She counts his intentional mistake for which he isn’t ashamed. She wants him to have some shame. She reprimands him for always crossing the limits and humiliating her. She warns him not to cross his limits. She tells that she isn’t the old Anuapma to bear his tormenting behavior. He wants to cut down her wings. She wants to fly high.

He raises hand on her. She tells him that she will not let him raise even his voice against her. She leaves his ego shattered. She tells him that he doesn’t even deserve blessings now. He feels humiliated. Anupama sheds tears of sorrow. She didn’t know her marriage will turn so bitter. She was happy in her world until her world broke down in front of her eyes. She hides much sorrow from the family. She smiles in front of them. She celebrates Diwali with the family. Vanraj grows jealous. He wishes his family missed him and awaited him.

Meanwhile, Kavya expects Vanraj to apologize to her. She receives a bouquet and thinks Vanraj had sent it. She gets happy. She happens to see Anirudh’s name. She feels Vanraj doesn’t care for the relation. She thinks Anirudh is better than Vanraj, Anirudh still remembers her birthday, Anirudh cares for her more than Vanraj does. She gets upset that Vanraj doesn’t value her. Later, Vanraj meets his family and tries to win them back, since Anupama claimed her rights on his family. He apologizes to his parents. He thinks of giving an answer to Anupama.

He wants Anupama to touch his feet. Anupama refuses. Vanraj meets his sons. He tells that he was stuck in work. He lies to them. Anupama doesn’t want Samar to be angry on his dad. Vanraj calls up Kavya to apologize to her. She tells him that its nothing new that he vents anger on her. He knows that he always makes mistakes. He is frustrated because of Anupama. He tells that it was the worst Diwali of his life. He doesn’t want to talk about Anupama.

He tells that his family is slowly forgetting him. He tells that he will be planning her birthday and spend time with her. He wants to be with her. She gets too glad that he remembers her birthday. Vanraj thinks his family will not care for his presence or absence. He tells the family that he is leaving for an important seminar. Rakhi tells Kinjal that she met Vanraj in Kavya’s building. Kinjal tries to hide his affair.

She asks Rakhi to meet Paritosh’s family and wish them, without spoiling their new year. Anupama takes care of Bapu ji. Hasmukh asks Anupama to come along with him for walking, since she needs fresh air. He wants her to become strong. Samar supports Anupama. He wants her to fly in the open sky. Rakhi plans a shocker for the family. She wants to expose Vanraj ad Kavya’s affair. She follows Vanraj and Kavya to the hotel and catches them romancing.

Reviewed Rating for this particular episode Anupama 18th November 2020 Written Update Anupama lashes out: 5/5
This rating is solely based on the opinion of the writer. You may post your own take on the show in the comment section below.